Trade credit is considered one of the safest extensions of credit given its short tenure and relative position in a bankruptcy but that does not mean risk free.  A good deal of the risk is event driven.   A good example today is exposure to the travel industry.  The chart below shows the one-month default probability as measured by the Kamakura Default Probability for Alaskan, American, Delta and United Airlines through the Covid-19 pandemic. Clearly at the peak of the crisis before government assistance there was a significant difference among the firms.

The Kamakura credit tools are equally relevant for corporate credit managers as for investment managers and credit portfolio managers.  This is especially true for corporations that engage in high dollar B-to-B sales.

Kamakura is an active participant with NACM and a participant in many of their conferences and contributor to credit publications.

Corporations, states and municipalities face a variety of risks with counterparty risk being a key one.  This risk can be as simple as having deposits that exceed the FDIC insurance limit in their bank account or as critical as the impact of a pending merger or acquisition for the acquiring party.  In both cases the term structure of default probability plays a critical role and ratings are not enough. 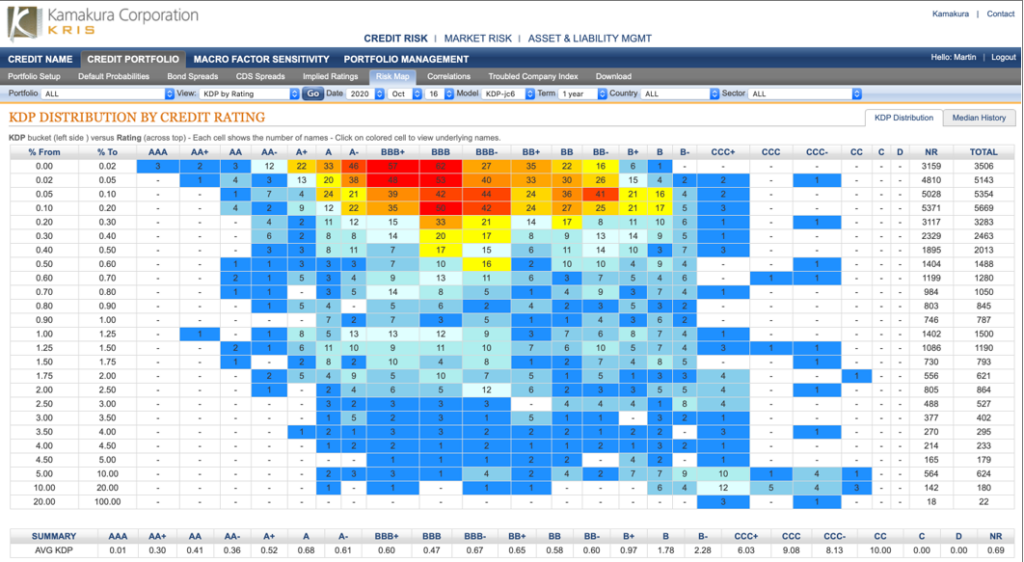 Implications of a Merger or Acquisition

Assuming the recovery rate in the event of default would be the same on all bond issues of the same issuer, a sophisticated investor who has moved beyond legacy ratings seeks to maximize revenue per basis point of default risk from each incremental investment, subject to risk limits on macro-factor exposure on a fully default-adjusted basis. The analytical support for this approach is defined in The Valuation of Corporate Bonds.

The risk tools provided by Kamakura are academically supported and our staff can help you understand how to deploy them for any use case in which certainty of future payment can be in doubt.