How Well Do U.S. Treasury Yields Forecast Inflation? An Update Through December 30, 2022

The size of the term premium embedded in the current U.S. Treasury yield curve has been a major focus of research by monetary policy makers and market participants. Researchers have employed both closed form solutions and no-arbitrage simulations using multi-factor models with stochastic volatility.  This paper, prepared with individual investors in mind, asks a question that should be answered first in order to estimate the current term premium: looking back over the history of the U.S. Treasury curve, what premium has been earned by investors who buy fixed rate Treasury bonds instead of rolling over 6-month Treasury bills?  The surprising answer is that this premium has never been negative for any trade date for maturities of 10 years and over.  Looking at “in progress” premiums for holding periods not yet completed, the answer is that “in progress” term premiums through December 30, 2022 are positive on average for maturities of 5 years and longer, but negative for maturities of 3 years and under.  The recent spike in short-term rates engineering by the Federal Reserve is the reason for “in progress” results that are much less positive than results from our December 31, 2021 update. 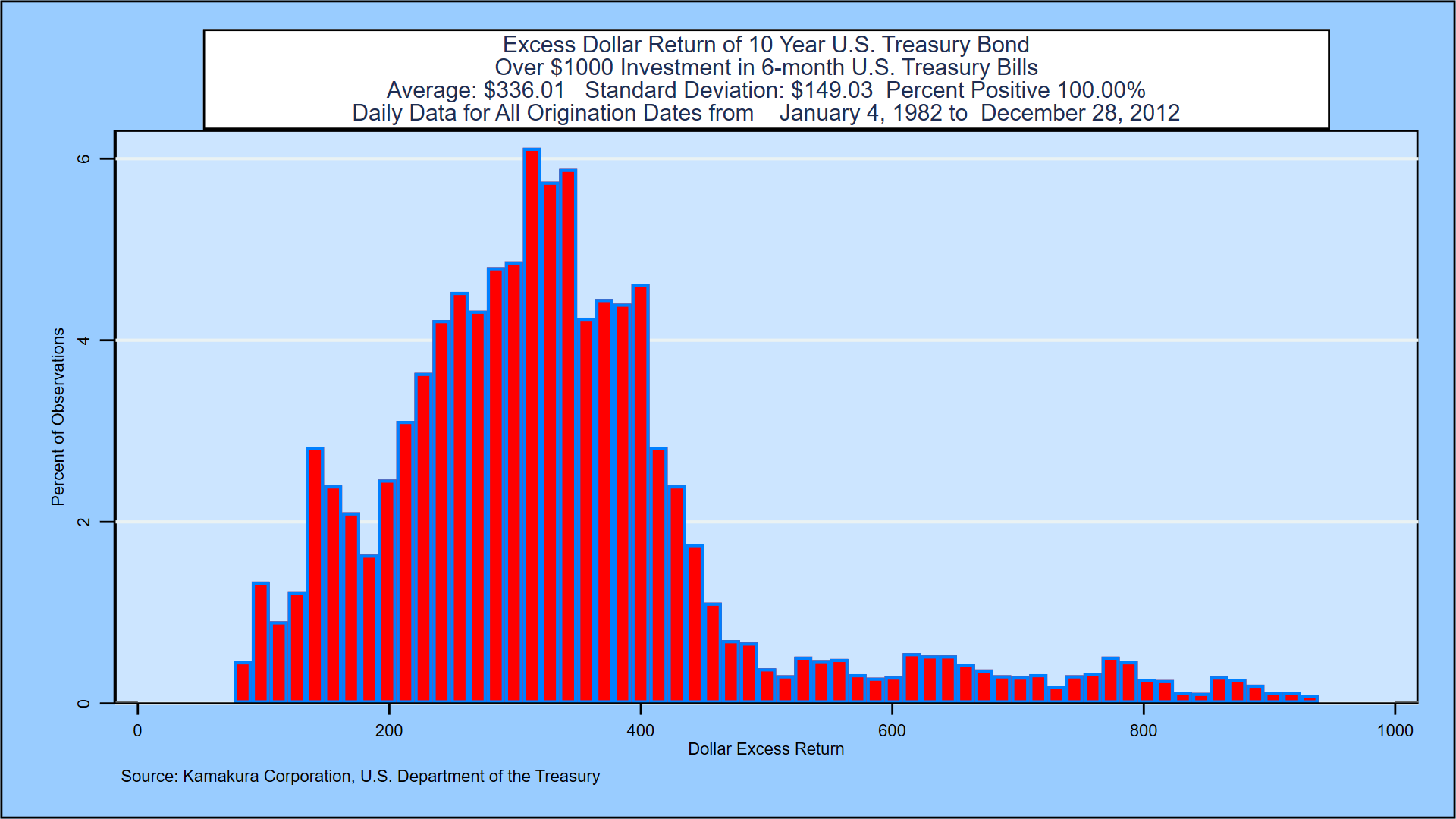 A related question is one often addressed by economists: how big is the “term premium” in the U.S. Treasury bond market?  There are many forward-looking articles on that topic. It is surprising that there are very few reviews of the historical results comparing rolling over short-term investments versus buying a fixed rate bond. That calculation answers both the inflation question and the term premium question.  If U.S. Treasury yields inaccurately reflect future inflation, then there should be many historical periods where the realized results from rolling over short-term Treasury bills exceed the return that an investor holding the matched-maturity long-term bonds would have received.

In this note we update our December 31, 2021, June 30, 2021, January 7, 2021 and October 4, 2017 analysis of realized and “in progress” term premiums in the U.S. Treasury market through December 30, 2022.  On every single trading day since 1982, we compare the actual results from rolling over 6-month Treasury bills compared to buying Treasury bonds with maturities of 1, 2, 3, 5, 7, 10, 20, and 30 years. Because interest rates were declining for much of this period but rising sharply in recent  months, we also report results for investments that are “in progress” and whose final outcome is still uncertain.

The payment dates, 6-month bill rates, and the value of the “money fund” are given in a spreadsheet attached as supplemental materials.

The total dollar returns on 1, 2, 3, 5, 7, 10, 20, and 30-year Treasury bonds, both realized and “in progress,” are given in a second spreadsheet that is also attached as supplemental material.

The results of the term premium analysis are summarized in the following table:

The results show that realized total dollar excess returns have never been negative for maturities of 10, 20, and 30 years. This conclusion is unchanged since the prior update through December 31, 2021. “Excess return” is the ending dollar amount of the “bond strategy” less the ending dollar amount of the “T-bill strategy.”  For example, on average, investors buying a $1000 1-year fixed rate bond earned $2.43 more than investors rolling over six-month Treasury bills, down $0.12 since the December 31, 2021 study.  The maximum advantage was $32.24, and the worst outcome was a loss: $-10.57.

Appendix A shows the evolution of total dollar return (in red) versus the 6-month T-bill money fund total dollar return (in blue) for completed 1, 2, 3, 5, 7, 10, 20 and 30-year terms beginning January 4, 1982.  For most holding periods, interest rates have declined substantially over the investment periods that have been completed.  The graphs in Appendix A also include the evolution of the initial six-month Treasury bill yields (in light blue) and the relevant fixed rate Treasury bond yields (in pink) on the origination dates.

Appendix B shows the histogram of realized dollar excess returns for each of the 8 fixed rate maturities.  Appendix C reports on the histograms of “in progress” pending dollar excess returns for each maturity. For these incomplete periods, we define the “pending excess return” as the known dollar advantage of the fixed-rate Treasury bond over the 6-month T-bill investment as of the observation date.   For example, on August 26, 2022, the amount of interest that will be paid on a 6-month Treasury bill equivalent that matures in 6 months (not necessarily 182 days) on February 26, 2023 is known with certainty.  We tally all of the pending dollar term premiums, all of which have a differing time to maturity, in the histograms in Appendix C.

One of the reasons for the positive long-term premium results is the large size of the “interest on interest” earned on the fixed coupon payments, which are assumed to be invested in 6-month Treasury bills.  The highest total realized dollar returns for all of the completed fixed-rate periods are shown in Appendix D. The lowest total realized dollar returns for each of the fixed-rate holding periods are shown in Appendix E.

The total dollar returns for the 10, 20 and 30-year Treasury bond have exceeded the total dollar returns for the 6-month T-bill money fund on every completed holding period for which data is available.  This is due in part because “interest on interest” earned on coupon payments rises when rates rise over the holding period, and, at least so far, this has been enough to generate strictly positive excess returns for 30-year bonds.  The recent spike in short-term interest rates, however, shows that the risk of “going long” is not zero, especially for maturities of 3 years and under.  The  next update of this analysis will be filled with drama.

With respect to the historical ability of Treasury yields to anticipate inflation, we conclude that the market’s forecast of future inflation has generally been quite accurate for very long-term holding periods.

It goes without saying that there is no guarantee that the future will be like the past.  At the same time, expectations for the future should be set with the past in mind.

The Appendices are available from the author in a supplemental PDF file.

[2] This is a different data series than was used by the papers reviewed by Li, Meldrum, and Rodriguez.  The selection of the U.S. Department of the Treasury series was intentional, because of interest rate smoothing quality advantages that we discuss in a separate note.

[3] The “use of proceeds” of cash thrown off from coupon payments was chosen for two important reasons.  First, the typical academic assumption that cash generated is reinvested in the same security is an investment strategy that is difficult, if not impossible, to execute in the U.S. Treasury market due to lack of liquidity in “off the run” issues.  Second, such an approach preserves the valuation of the Treasury bond when using the risk neutral discounting methodology of Heath, Jarrow and Morton [1992].