Reformed lawyer Jerome Powell argued in Jackson Hole that market participants are underestimating the Fed’s determination to fight inflation with higher rates.  While market participants and media pundits certainly focused on Mr. Powell’s remarks, they also know a lot about the history of Treasury yields.  This data confirms what Heath, Jarrow and Morton (see below) predicted in their classic 1992 article: Treasury yield changes are a function of both the volatility of rates and the slope of the current yield curve.  Moreover, the average drift in rates since 1962 shows that as rates rise, it is more likely that rates drift lower. The opposite is true at low rate levels. Students of history among market participants realize that the generally negative yield curve slope and the decreasing upward drift in rates partially offset each other.  The result, as we explain below, is a generally negative 10-year trend in 3-month Treasury bill yields despite Mr. Powell’s remarks.

We start from the closing U.S. Treasury yield curve and the interest rate swap quotations based on the Secured Overnight Financing Rate published daily by the Federal Reserve Bank of New York. Using a maximum smoothness forward rate approach, Friday’s implied forward rate curve shows a quick rise in 1-month rates to an initial peak of 3.64%, versus  3.59% last week. After the initial rise, there is some volatility before rates peak again at 3.06%, compared to 2.99% one week ago. Rates finally peak again at 4.68%, compared to 4.76% last week, and then decline to a lower plateau at the end of the 30-year horizon. 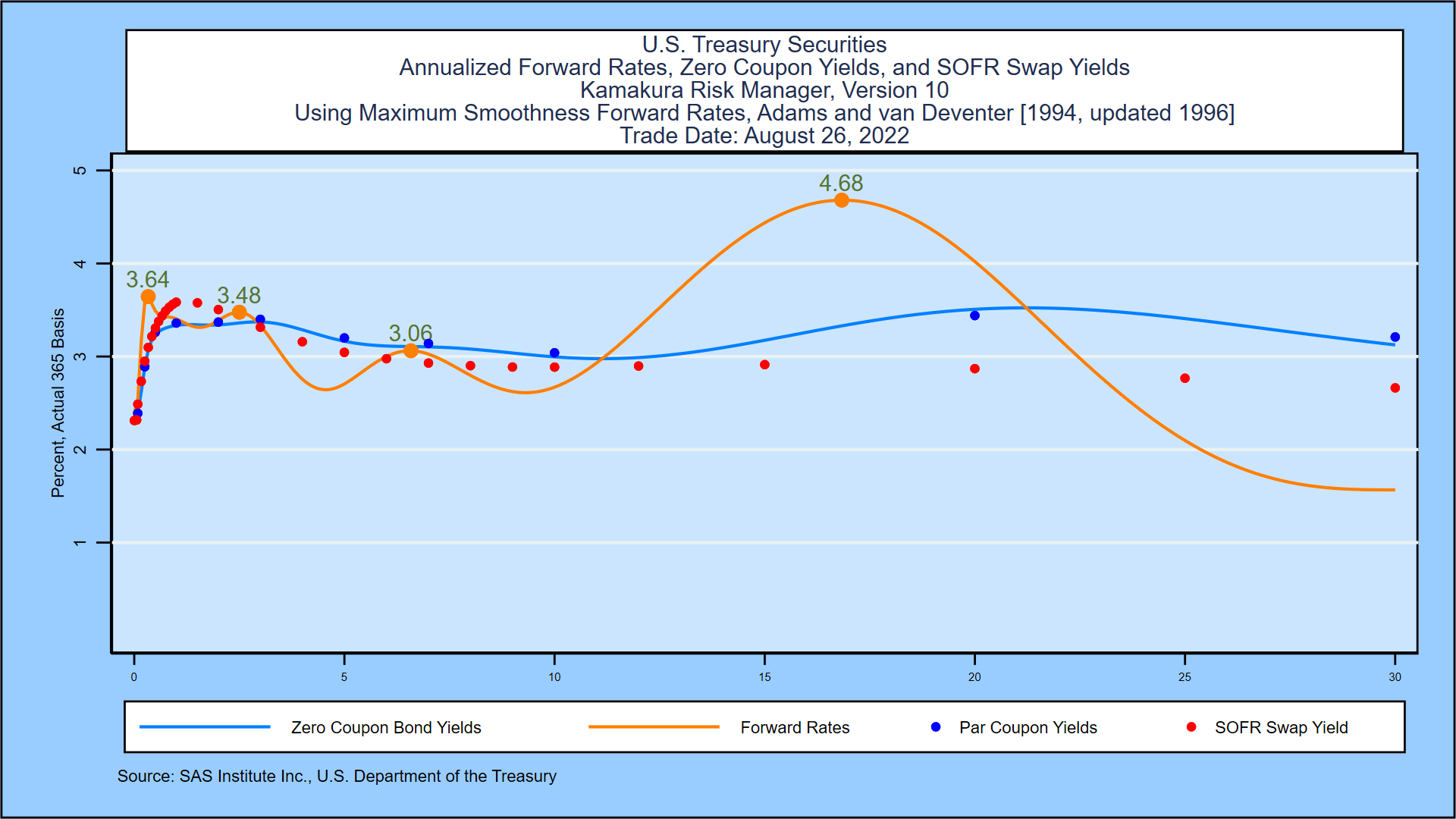 A large number of economists have concluded that a downward sloping U.S. Treasury yield curve is an important indicator of future recessions. A recent example is this paper by Alex Domash and Lawrence H. Summers. We measure the probability that the 10-year par coupon Treasury yield is lower than the 2-year par coupon Treasury for every scenario in each of the first 80 quarterly periods in the simulation.[1] The next graph shows that the probability of an inverted yield remains high, peaking at 81.7%, compared to 76.2% one week before, in the 91-day quarterly period ending February 24, 2023. 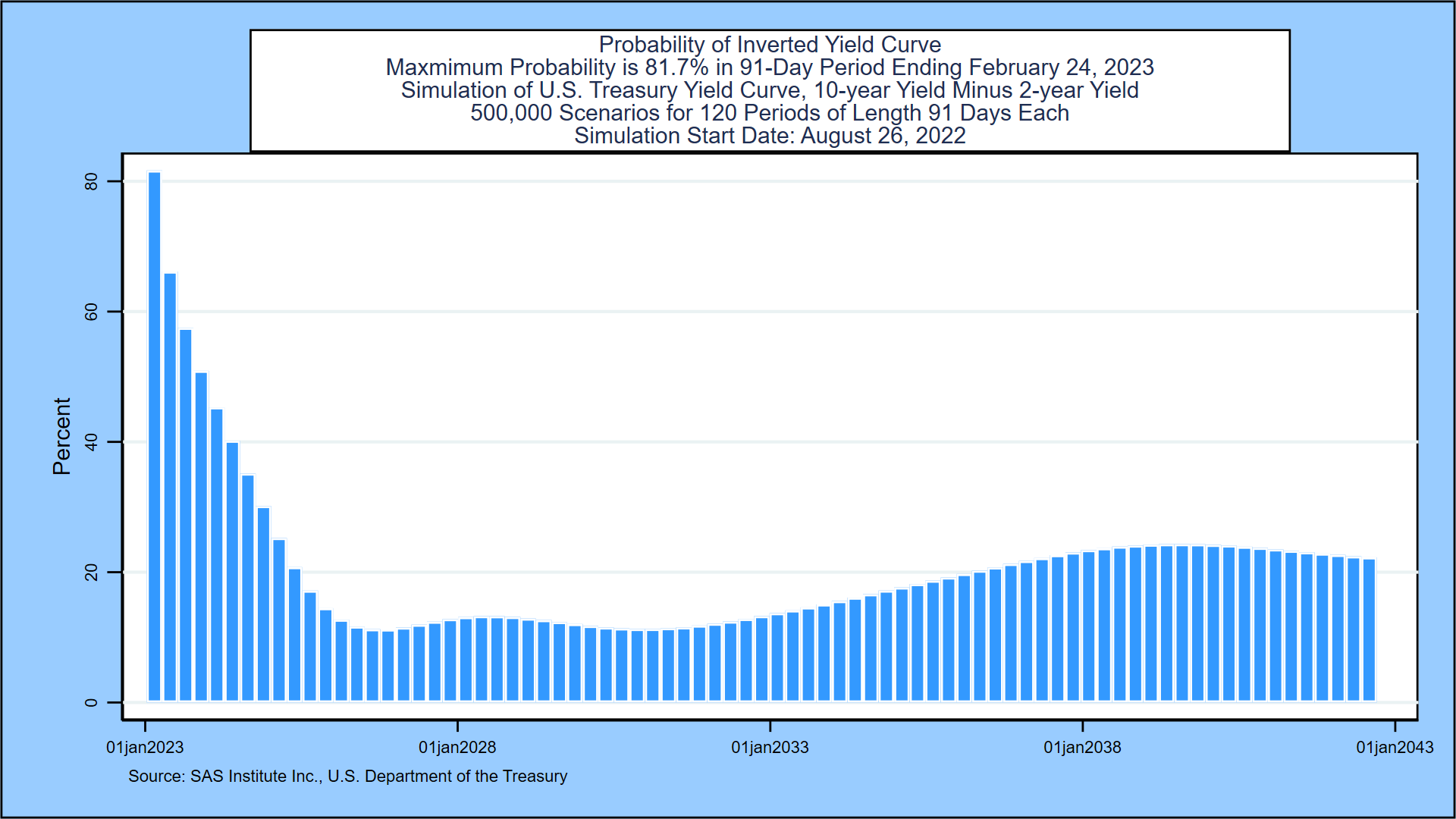 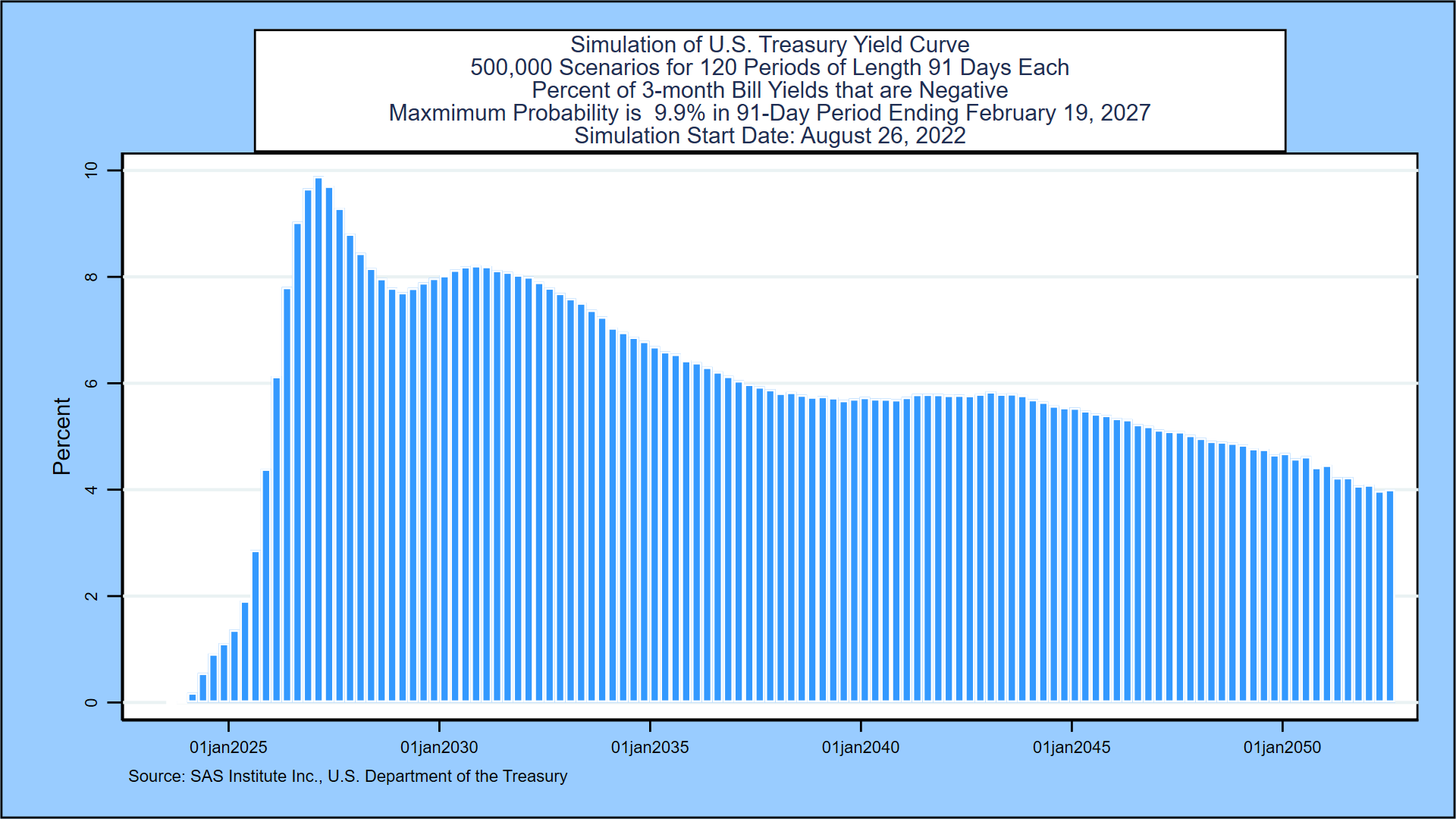 In this section, the focus turns to the decade ahead. This week’s simulation shows that the most likely range for the 3-month U.S. Treasury bill yield in ten years is from 0% to 1%. There is a 28.91% probability that the 3-month yield falls in this range, a change from 28.65% one week before. For the 10-year Treasury yield, the most likely range is from 2% to 3%. The probability of being in this range is 24.59%, compared to 24.24% one week prior. 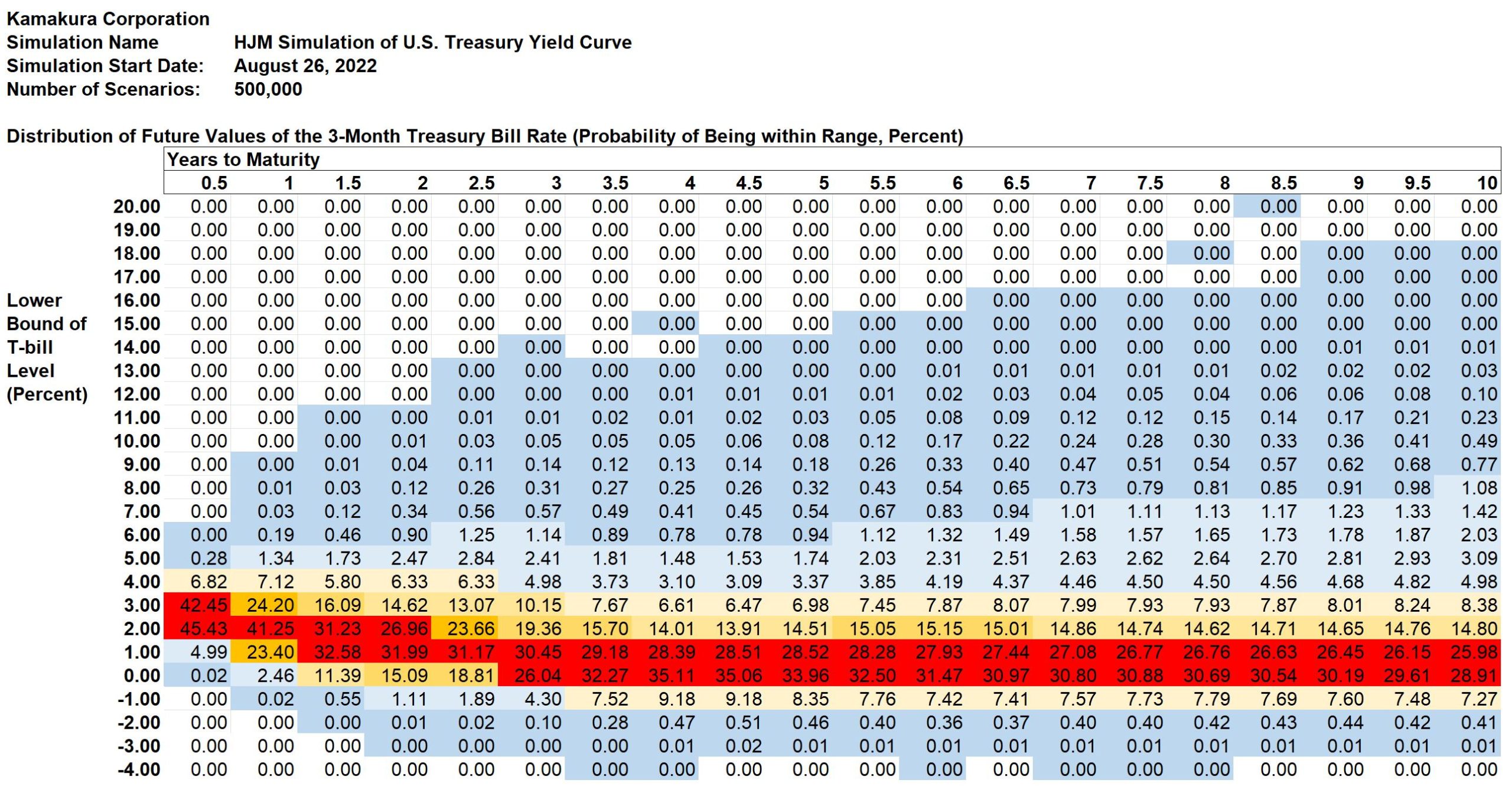 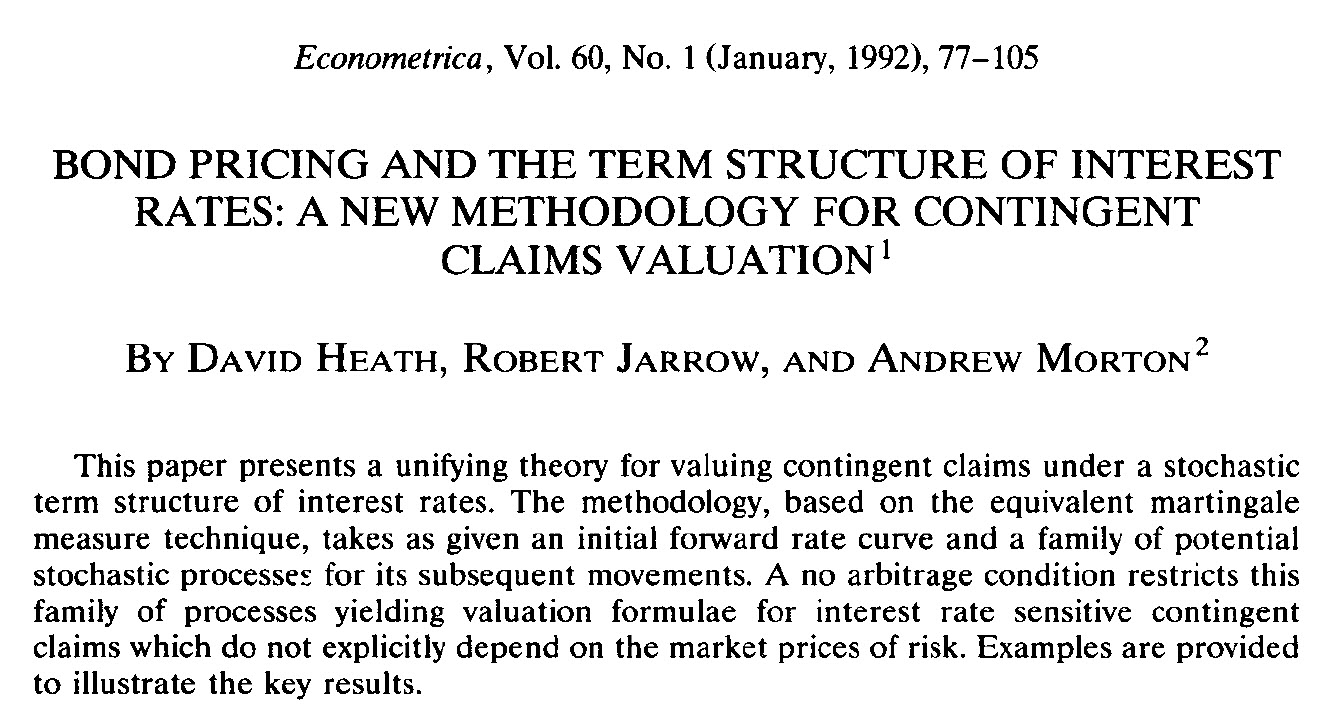 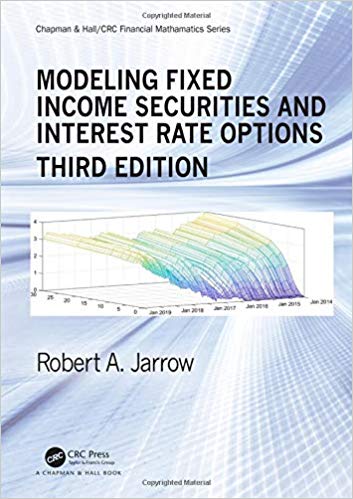