How Will a Slowing Economy Impact Credit Defaults?

How Will a Slowing Economy Impact Credit Defaults?
Kamakura Troubled Company Index Decreases by 1.38% to 5.56%
Credit Quality Improves to the 95th Percentile

NEW YORK, August 2, 2022: U.S. GDP contracted 0.9% in the second quarter, following a contraction of 1.6% in the first quarter. It’s a strong contrast to the fourth quarter of 2021, in which GDP expanded 6.9%.  Inventory contraction was the largest driver, reducing GDP by 2 percentage points. Consumer spending increased by just 1%–the lowest rate since the pandemic, and far below the 1.8% growth rate in the previous quarter. Inflation continues to be high and push higher on a global basis. Last month we asked whether central banks could reduce demand without causing a recession.  This month we examine how central bank policies and the business cycle will impact the credit cycle.

The Kamakura Troubled Company Index® shows that short-term default risk improved over the month as credit conditions jumped to the 95th percentile of the period from 1990 to the present.   The 100th percentile indicates the best credit conditions during that period. The Kamakura Troubled Company Index closed in July at 5.56%, compared to 6.94% the month before. The index measures the percentage of 41,500 public firms worldwide with an annualized one-month default probability over 1%. An increase in the index reflects declining credit quality, while a decrease reflects improving credit quality.

Given that we are in the early stages of the tightening cycle, we will shift the analysis to the 20 riskiest-rated firms based on their one-year probability of default.   In July, 13 of these companies were in the United States, with two each in Luxemburg and the UK and one each in Germany, Ireland, and Mexico. The riskiest-rated firm was Exela Technologies (XELA:NASDAQ), with a one-year KDP of 57.32%, up 9.64% from the previous month.  By comparison the one-month KDP was 28.77% up 0.23%.

The Federal Reserve increased interest rates last week by 75 basis points for the second time in two months.  Members voted unanimously in favor of the aggressive move to try to control inflation.  It should be noted that in the last 11 tightening cycles, the Fed has only avoided a recession three times.  During each of these cycles, inflation was lower than it is today.  However, it should also be pointed out that both current employment conditions and the lingering effects of the supply chain disruption does mean that “this time is different.”  Europe, in addition to battling inflation, is dealing with a precarious energy situation, and the value of the Euro is declining.

Given the fact that we are in the early stages of the tightening cycle by central banks, it is instructive to examine forward-looking default measures, such as the Expected Cumulative Default Rates. We should also spend more time studying the implications of the term structure of defaults.  Figure 3 below shows that while expected cumulative defaults are beginning to accelerate across geographies, they also vary significantly by region. 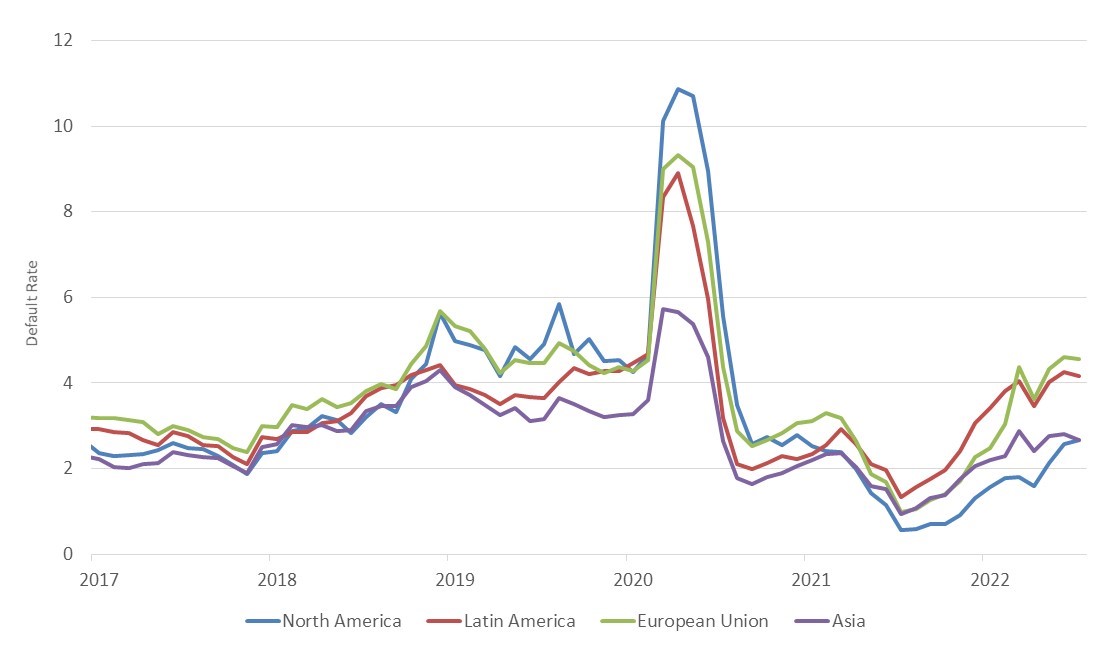 This differentiation becomes more pronounced when we focus on country data, with Italy showing the highest risk and Canada on the low end. 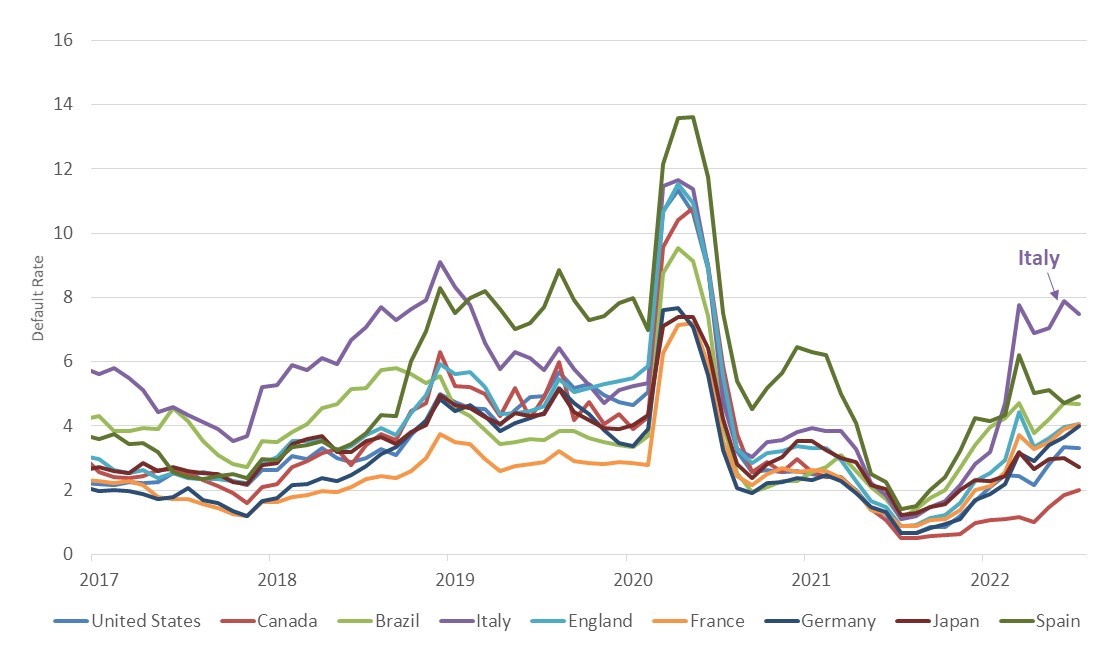 We are now entering a period of business cycle correction and contraction.  Rising interest rates and a reduction of liquidity, combined with less accommodative credit policies, will put pressure on households and companies with the most leverage.  More critically, many portfolio and credit managers have not experienced an inflationary environment, and many of the tools they use are not calibrated to manage one. For example, most are still using single-factor copula models, which backfired during the credit crisis of the Great Recession and are likely to do so again, rather than adopting more modern simulation models.

During the upcoming month, we plan to analyze the forward-looking data to examine differences in sectors, in addition to the geographic differences noted today.  We will also examine the drivers for these differences.  These are all critical metrics that will help risk managers determine whether to profit from risk, avoid risk or hedge.

The Kamakura Troubled Company Index® measures the percentage of 41,500 public firms in 76 countries that have an annualized one- month default risk of over one percent. The average index value since January 1990 is 14.18%.  Since November 2015, the Kamakura index has used the annualized one-month default probability produced by the KRIS version 6.0 Jarrow-Chava reduced form default probability model, a formula that bases default predictions on a sophisticated combination of financial ratios, stock price history, and macro-economic factors.

SAS is the leader in analytics. Through innovative software and services, SAS empowers and inspires customers around the world to transform data into intelligence. SAS gives you THE POWER TO KNOW®. 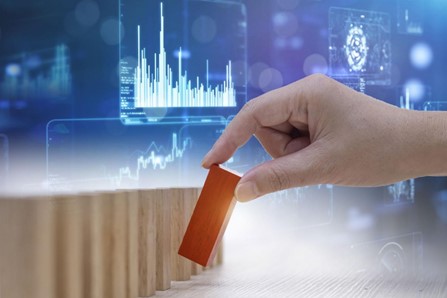