Credit Risk Rebound or a Bump on a Downhill Slide?

Credit Risk Rebound or a Bump on a Downhill Slide?
Kamakura Troubled Company Decreases by 1.37% to 7.02%
Credit Quality Improves to the 88th Percentile

NEW YORK, June 2, 2022: Volatility in inflation, interest rates, and Eastern Europe has roiled financial markets and the credit risk expectations of market participants.  The doom and gloom that prevailed in April was partially lifted in May, which saw Treasury yields fall on six of the last eight trading days in the month.

The Kamakura Troubled Company Index® shows that short term default risk in May recovered half of April’s deterioration. Corporate credit quality improved 11 points to the 88th percentile of the period from 1990 to the present.  The 100th percentile indicates the best credit conditions during that period. The Kamakura Troubled Company Index closed in May at 7.02%, compared to 8.39% in April and 5.08% in March. The index measures the percentage of 41,200 public firms worldwide with an annualized one-month default probability over 1%. An increase in the index reflects declining credit quality, while a decrease reflects improving credit quality.

Among the 20 riskiest-rated firms at the end of May, 14 were in the United States. The riskiest-rated firm was Exela Technologies, with a one-month KDP of 50.22%, up 17.28% from the previous month.  Sunac China Holdings Ltd. was the only default in the Kamakura coverage universe in May. 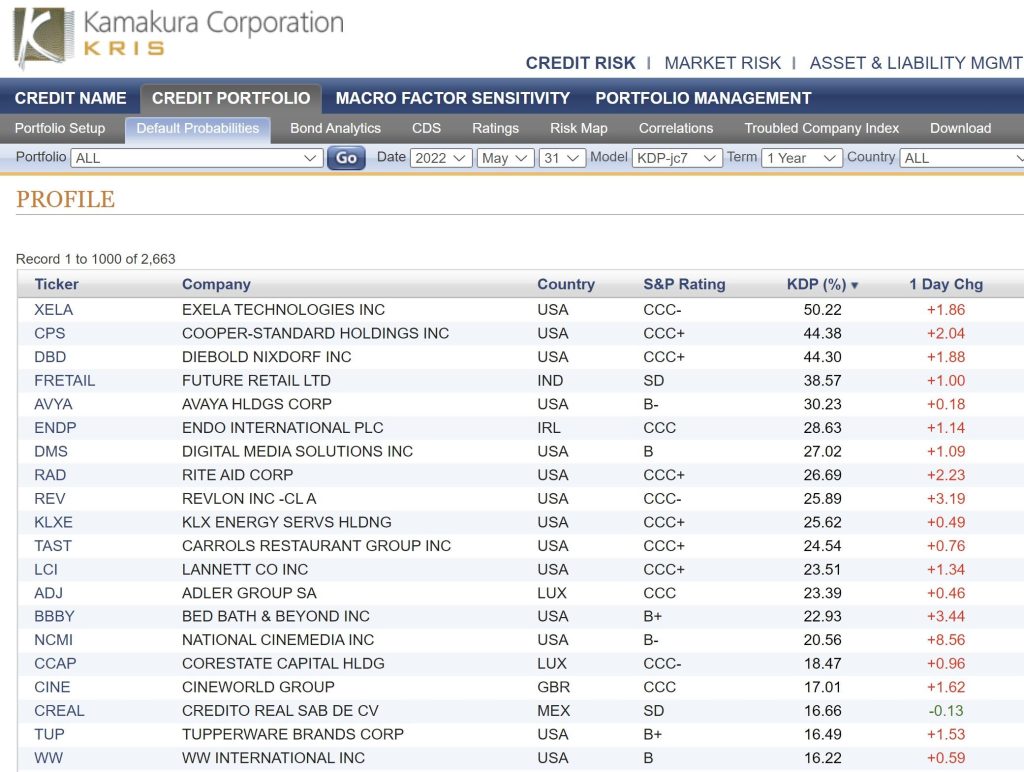 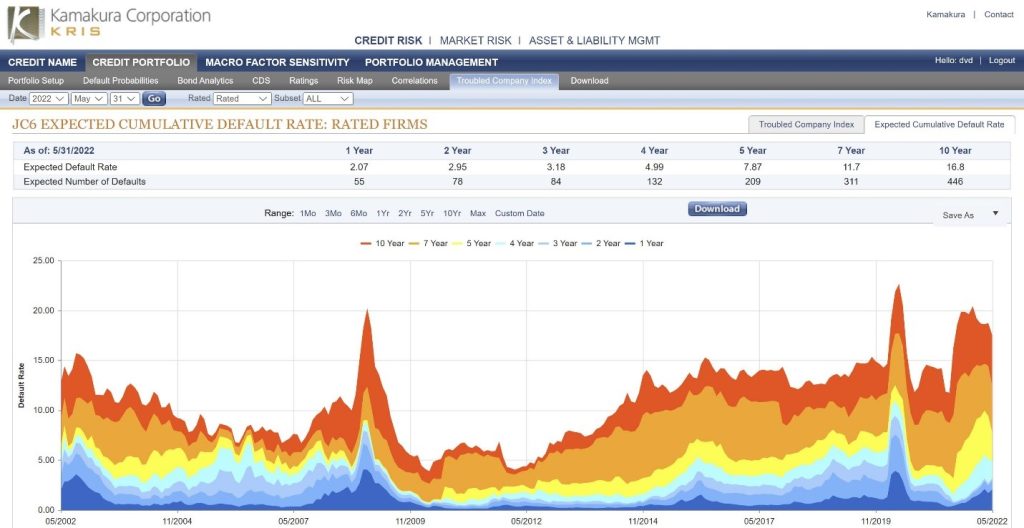 Just two months ago, the 2-year/10-year Treasury spread turned negative for a few business days before returning to its normal upward slope.  Is the inverted yield curve a reliable predictor of future recessions?  Most statisticians would say the sample size (the number of recessions) is too small to answer that question with high confidence.  Kamakura’s weekly simulation of U.S. Treasury yields shows that the probability of an inverted yield curve peaks at 33.6% in the 3-month period ending in May 2023. 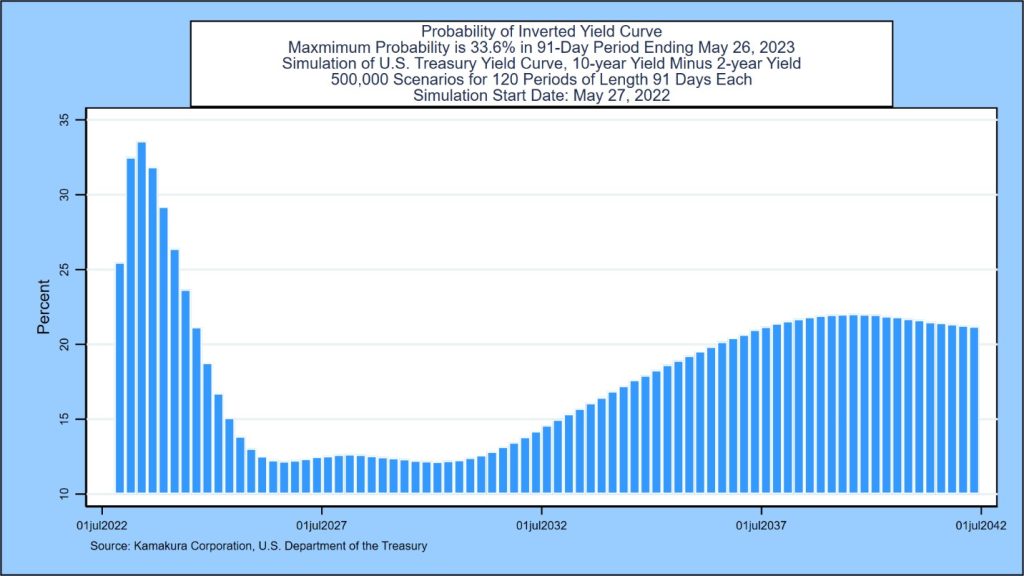 One forecast that is rock-solid is that both the Federal Reserve Board’s members and a large number of interest rate risk managers are going through “on the job training” as this note is written. That spells potential danger for credit risk managers.

About the Troubled Company Index
The Kamakura Troubled Company Index® measures the percentage of 41,200 public firms in 76 countries that have an annualized one- month default risk of over one percent. The average index value since January 1990 is 14.22%.  Since November 2015, the Kamakura index has used the annualized one-month default probability produced by the KRIS version 6.0 Jarrow-Chava reduced form default probability model, a formula that bases default predictions on a sophisticated combination of financial ratios, stock price history, and macro-economic factors. Beginning next month, the index will be based on the newly released version 7.0 Jarrow-Chava model.

Kamakura has served more than 330 clients with assets ranging in size from $1.5 billion to $10.0 trillion.  Current clients have a combined “total assets” or “assets under management” in excess of $38 trillion.  Its risk management products are currently used in 47 countries, including the United States, Canada, Germany, the Netherlands, France, Austria, Switzerland, the United Kingdom, Russia, Ukraine, South Africa, Australia, China, Hong Kong, India, Indonesia, Japan, Korea, Malaysia, Singapore, Sri Lanka, Taiwan, Thailand, Vietnam, and many other countries in Asia, Europe and the Middle East.