Rate Inversion and Russian Invasion
Nonetheless the Kamakura Troubled Company Decreases by 1.67% to 5.32%
Credit Quality Improves to the 96th Percentile

NEW YORK, April 4, 2022: While the pundits argue about whether an inverted Treasury curve can predict recession based on only 4 past occurrences, there is no argument that the Russian invasion of Ukraine has put the world economy in uncharted territory.  Meanwhile, inflation triggered by massive covid-era government spending finally became such an obvious risk factor that even the Federal Reserve Board noticed.

The Kamakura Troubled Company Index® shows that, despite these ominous risk factors, short-term credit risk remains low and the longer run credit outlook continues to be worrisome. The index reversed course in March and indicates that credit conditions improved 8 points to the 96th percentile of the period from 1990 to the present.  The 100th percentile indicates the best credit conditions during that period. The Kamakura Troubled Company Index closed March at 5.32%, compared to 6.99% the month before. The index measures the percentage of 40,500 public firms worldwide with an annualized 1-month default probability over 1%. An increase in the index reflects declining credit quality, while a decrease reflects improving credit quality.

Among the 20 riskiest-rated firms listed in March, 12 were in China (including Hong Kong) two in Great Britain, and one each was in the United States, Canada, Japan, Malaysia, Mexico, and Norway. The riskiest-rated firm was Zhangmen Education Inc. with a one-month KDP of 30.74%, down 7.55% from the previous month.  There were no defaults in the Kamakura coverage universe in March. 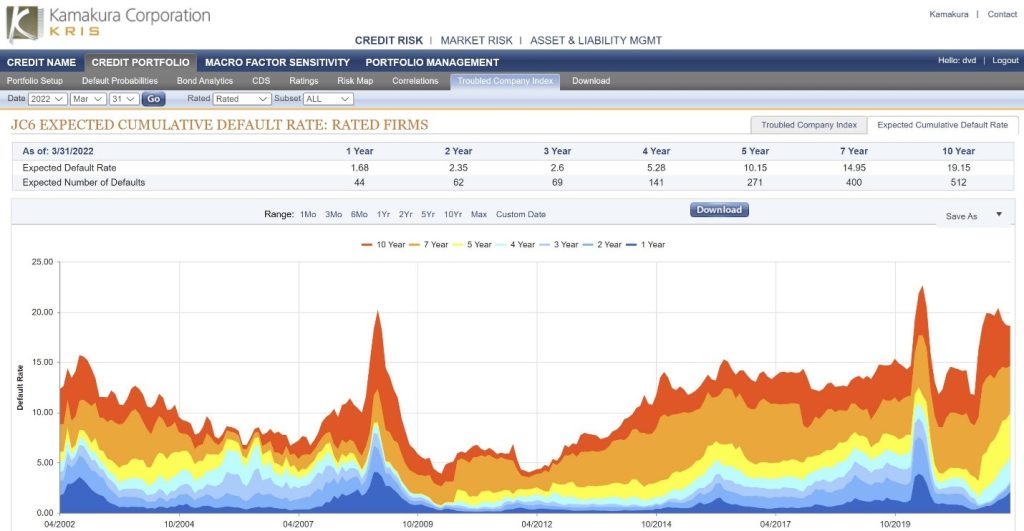 Fourteen U.S. dollar bonds from Russian issuers traded in the U.S. bond market on March 31.  Prices ranged from 8 to 68 for the day. Prices were mixed as hedge funds arm-wrestled over their projections for the biggest armed conflict in Europe in 8 decades. Meanwhile, in domestic U.S. markets, pundits large and small tried to extract statistical significance from 4 (yes, only four) past incidences of inverted Treasury yields.  Kamakura’s projections done on March 25 showed a probability of the 2-year/10-year inversion of 50.9% at year-end 2022.  Meanwhile, on April 1, the two-year yield hit 2.44% with the 10-year 6 basis points lower at 2.38% according to the U.S. Treasury’s daily time series of constant maturity yields.

With inflation running rampant, why are U.S. Treasury yields on the long end of the curve still trading in the 3 percent range?  A recent study done by Kamakura reveals the surprising fact that rolling over short-term Treasuries has never been better than holding 10-year and longer U.S. Treasuries to maturity.  That study examined every single trading day since January 1982 through December 31, 2021.  Kamakura’s interest rate outlook also shows a hefty term premium over the best available estimates of expected short Treasury yields over the full 30-year maturity spectrum.  We leave it to the reader to opine on whether that happens because of more skillful management of the economy by the current set of government officials or because of a more skillful selection of government officials by the voters. In either case, skillful risk management is essential.

Lastly, on the occasion of Kamakura’s 32nd anniversary, the entire multinational team at Kamakura wishes to express our heartfelt thanks to our extremely sophisticated group of risk management clients.

About the Troubled Company Index
The Kamakura Troubled Company Index® measures the percentage of 40,500 public firms in 76 countries that have an annualized one- month default risk of over one percent. The average index value since January 1990 is 14.26%.  Since November 2015, the Kamakura index has used the annualized one-month default probability produced by the KRIS version 6.0 Jarrow-Chava reduced form default probability model, a formula that bases default predictions on a sophisticated combination of financial ratios, stock price history, and macro-economic factors.