No Free Lunch
Kamakura Troubled Company Increases by 1.30% to 5.70%
Credit Quality Weakens to the 94th Percentile

NEW YORK, February 2, 2022: The year has started with an ominous increase in global uncertainty. Rising geopolitical tensions, Covid variants, labor shortages, continued supply chain disruptions, inflationary pressure, market volatility and a change in the interest rate regime by the Federal Reserve and other central banks are just a few of the issues markets are facing. In this environment, the risk of error increases for portfolio managers and business decision makers, as well as for government policy makers. The withdrawal of monetary policy accommodation will be a key test for the markets in the months ahead.

The Kamakura Troubled Company Index® indicates that credit quality remained low by historical measures but increased in January to 5.70%, compared to 4.40% last month. Volatility increased for the second consecutive month, with default probabilities ranging from 3.98% on January 12 to 7.19% on January 26. Over the past year, the index has declined by 13.97%. The low was set on August 12, at 2.06%. An increase in the index reflects declining credit quality, while a decrease reflects improving credit quality.

Among the 20 riskiest-rated firms listed in January, eight were in China, with seven in the U.S., two in Mexico, and one each in Great Britain, Ireland and Norway. The riskiest-rated firm was Petroleum Geo-Services, PGS ASA of Norway (OSE:PGS) with a one-month KDP of 24.26%, up 21.45% from the previous month.  Last month’s riskiest firm, ION Geophysical Corp (NYSE:ION), defaulted on January 4. Ion was the only default in the Kamakura coverage universe. 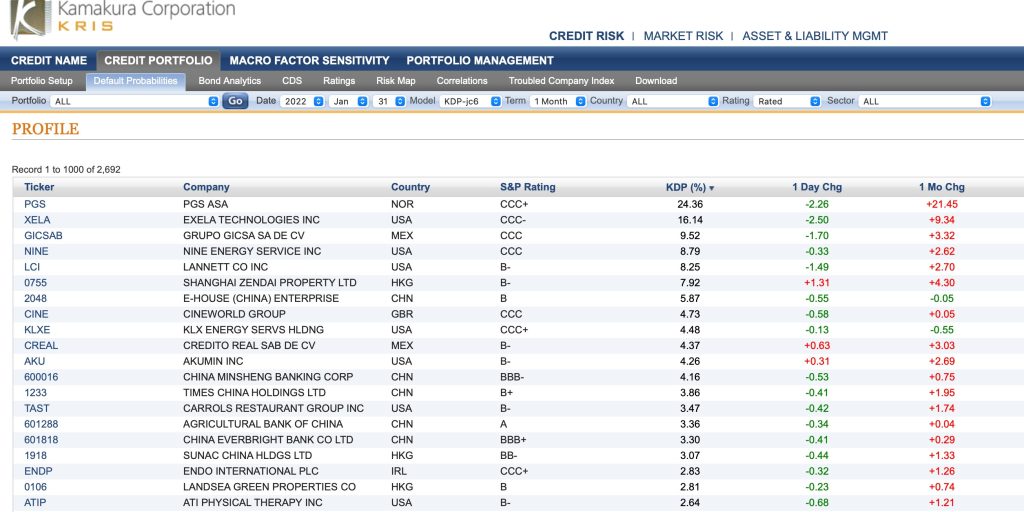 The Kamakura Expected Cumulative Default Rate, the only daily index of credit quality for rated firms worldwide, shows the one-year rate up 0.30% at 1.56%, and the 10-year rate flat at 19.16%.

Commentary
By Martin Zorn, President and Chief Operating Officer, Kamakura Corporation
As noted in the introduction, we started the new year with an increase in the number of known risks. The Federal Reserve’s message on unwinding quantitative easing has been muddled at best, contributing to the uncertainty. We already know the Fed erred in its early estimation that inflation was “transitory.” And since Jerome Powell has been chair, the market has come to expect the “Powell Put,” hoping that if asset prices fall precipitously, the Fed will come to the rescue. But we also know that “hope” is not a strategy.

Capitalism encourages investment with the expectation of profit. It also produces failures. The key to capitalism’s success is market participants’ willingness to forgo immediate gratification to obtain greater future reward. At its most simplistic, it is the story of the fisherman who foregoes several days of fishing with a line and hook in order to build a net.

Today’s politicians – and the policy makers who follow their lead — promise immediate results while deferring the costs of paying for them. Covid-related programs are an example. Obviously, the pandemic required a policy response, but the monetary and fiscal policies the government adopted, while they prevented catastrophic outcomes, were extremely broad and expansive. We do not yet know all of their deferred effects, but inflation is one that is already raising its ugly head. Will an acceleration in future defaults be a second byproduct?

Our expected cumulative default table suggests an answer, clearly showing an acceleration in expected defaults between years 3 and 5. Hence there is no free lunch.  One could almost wonder whether politicians who said “Go big!” were referring to the size of the stimulus or the size of the next credit downturn.

As we have said before, the role of risk management is to anticipate what may happen and be prepared to respond quickly to a dynamic environment. The current environment provides an opportunity for well-informed risk managers to be the stars of their organizations.

The best indicator of default risk is the bond markets. I closely follow our CEO Dr. Donald van Deventer’s daily blog Corporate Bond Investor  in this regard to examine the daily attribution of risks as they relate to changes in bond prices. Table 2 below shows the one-month attribution as of January 31, 2022.

About the Troubled Company Index
The Kamakura Troubled Company Index® measures the percentage of 40,500 public firms in 76 countries that have an annualized one- month default risk of over one percent. The average index value since January 1990 is 14.32%.  Since November 2015, the Kamakura index has used the annualized one-month default probability produced by the KRIS version 6.0 Jarrow-Chava reduced form default probability model, a formula that bases default predictions on a sophisticated combination of financial ratios, stock price history, and macro-economic factors.