Planning for Risks in the Year Ahead

The role of risk management is not to predict the future, but to analyze, simulate and evaluate conditions that could happen and develop appropriate game plans.  We will end the year by looking ahead to the risks that should be on our radar for the new year.

The Kamakura Troubled Company Index® indicates that credit quality remained low by historical measures and decreased in December to 4.40% compared to 5.30% last month. Volatility increased with default probabilities ranging from 3.18% on December 3 to 5.77% on December 3.  Over the past year, the index has declined by 10.66%.  The low was set on August 12, at 2.06%. An increase in the index reflects declining credit quality, while a decrease reflects improving credit quality.

Among the 20 riskiest-rated firms listed in December nine were in China, with six in the U.S. and one each in Chile, Great Britain, Luxembourg, Mexico, and Norway. The riskiest-rated firm was ION Geophysical Corp (NYSE:ION), with a one-month KDP of 10.29%, up 6.92% from the previous month. Codere S.A. (BME:CDR), had its Local Currency LT credit rating withdrawn on December 17. There were two global defaults in the Kamakura coverage universe, one each in China and Malaysia. 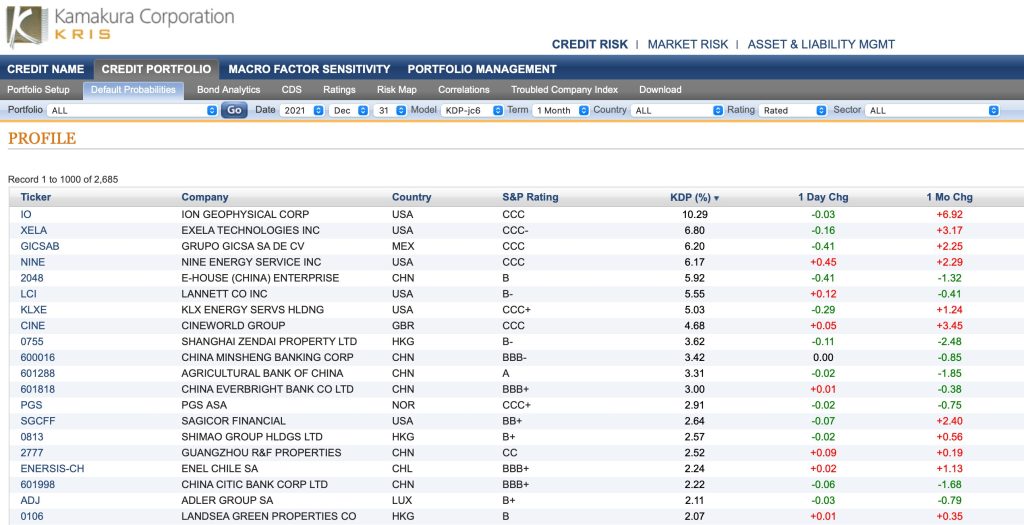 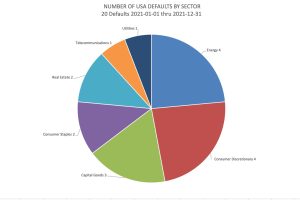 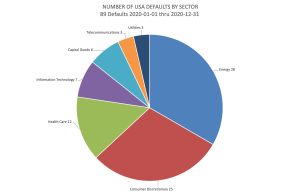 When we entered December with the new threat of the Omicron variant, the markets initially sold off, but then quickly recovered and continued their march upward.  It was just another example of a year that proved to be financially resilient, no matter what uncertainties unfolded. One must wonder if the markets in 2022 will continue to overcome whatever gets thrown at them, or whether they will slow to adjust to an environment containing an increasing number of uncertainties. Another possibility is a correction. If we do have one, will it be mild, or will the markets overreact to the downside?

There has been much debate about inflation. For many months central bankers insisted it was transitory. But the narrative began to shift as excess savings that were accumulated during the pandemic led to pent-up demand – amid significantly insufficient supply and bottlenecks. Policy makers then said they hoped this situation will correct itself. (Hope is not a strategy, but that’s a discussion for another time.) Central banks have long insisted they have the tools to fight inflation, but do they have the backbone to use them?  Have they already waited too long, and will these above-target inflation rates be with us longer than expected? These questions imply that we should model rate hikes both slower and faster than expected, as well as using lower and higher figures than the markets seem to indicate.

In addition, geopolitical risks are rising. Russia and Ukraine, China and Taiwan, a nuclear Iran and expanding and shifting alliances in the Middle East are a few examples of the risks we see in current headlines.  While Afghanistan seems to have evaporated from the headlines, the risks there remain, as do the continual risks of escalating conflict between India and Pakistan. Global risk is always a “known unknown,” which for forecasting purposes means deterministic modeling is not enough, and one should include stochastic models in the tool kit.

Another perennial headline grabber is environmental risks, which are primarily being addressed through regulatory means rather than allowing market solutions to evolve. I am at an age to remember Ronald Reagan’s famous statement: “The nine most terrifying words in the English language are ‘I’m from the government, and I’m here to help.’”

Central planning simply does not work. Regulatory reforms often lead to unanticipated consequences, and environmental risks are no exception. When government policies pick winners and losers, what could possibly go wrong? We will undoubtedly find out.

During 2021 we also saw the rise of “meme stocks,” crypto assets and the use of SPACs as an easy way to go public without providing the transparency of a normal offering.  Having been involved in filing many Form S-1s and Form S-3s, I appreciate the fact that launching a SPAC is easier. But I am also aware that the lack of transparency carries its own set of risks.

I cannot conclude a list of potential risks without asking about what is next for Covid. The virus has been the primary disruptor of business, the economy, and modeling and risk management for two years. While we can’t yet model this known unknown, it is a factor that risk managers will need to consider in 2022, and possibly beyond.

As we conclude 2021, we want to remind our readers that the role of risk management is to anticipate what may happen and be prepared to respond quickly to a dynamic environment. Of all the risks we’ve mentioned, inflation and interest rates are the most immediate concerns, and both are directly impacted by the effects of policies and mismanagement.

The best indicator of inflation is the medium-term Treasury markets. The best indicator of default risk is the bond markets. I closely follow our CEO Dr. Donald van Deventer’s daily blog Corporate Bond Investor  in this regard to examine the daily attribution of risks as they relate to changes in bond prices. Table 2 below shows the one-month attribution as of December 31, 2021.

We want to wish our readers the very best for the new year!

About the Troubled Company Index
The Kamakura Troubled Company Index® measures the percentage of 40,500 public firms in 76 countries that have an annualized one- month default risk of over one percent. The average index value since January 1990 is 14.32%.  Since November 2015, the Kamakura index has used the annualized one-month default probability produced by the KRIS version 6.0 Jarrow-Chava reduced form default probability model, a formula that bases default predictions on a sophisticated combination of financial ratios, stock price history, and macro-economic factors.