Kamakura Troubled Company Increases by 1.90% to 5.30%
Credit Quality Remains Strong but Drops to the 97th Percentile

NEW YORK, December 1, 2021: In September, our monthly credit conditions release was entitled “Cassandra vs. Goldilocks.” In a “Goldilocks” outcome, supply chain bottlenecks would disappear and no new Covid variants would arise. Clearly, that hasn’t happened. As we enter December, supply bottlenecks are still with us and we are trying to determine the implications of the Omicron Covid strain

The Kamakura Troubled Company Index® indicates that credit quality remained low by historical measures but increased in November to 5.30% compared to 3.40% last month. Volatility increased with default probabilities ranging from 3.25% on November 3 to 5.31% on November 26.  Over the past year, the index has declined by 8.68%.  The low was set on August 12, at 2.06%. An increase in the index reflects declining credit quality, while a decrease reflects improving credit quality.

Among the 20 riskiest-rated firms listed in November, 11 were in China, with five in the U.S. and one each in Luxembourg, Mexico, Norway and Spain. The riskiest-rated firm remained Codere S.A. (BME:CDR), a Spanish consumer services and gaming company.  The firm had a one-month KDP of 21.92%, up 8.30% from the previous month. There were four global defaults in the Kamakura coverage universe, two of which occurred in the U.S. and one each in China and Germany. 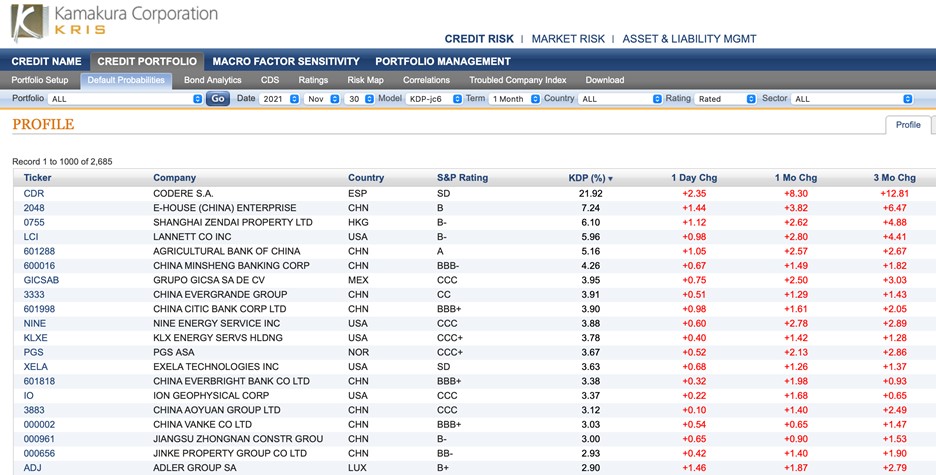 The Kamakura Expected Cumulative Default Rate, the only daily index of credit quality of rated-firms worldwide, shows the one-year rate up 0.60% at 1.40%, and the 10-year rate down 0.89% at 19.15%. The shift results in an increase in near-term expected defaults. 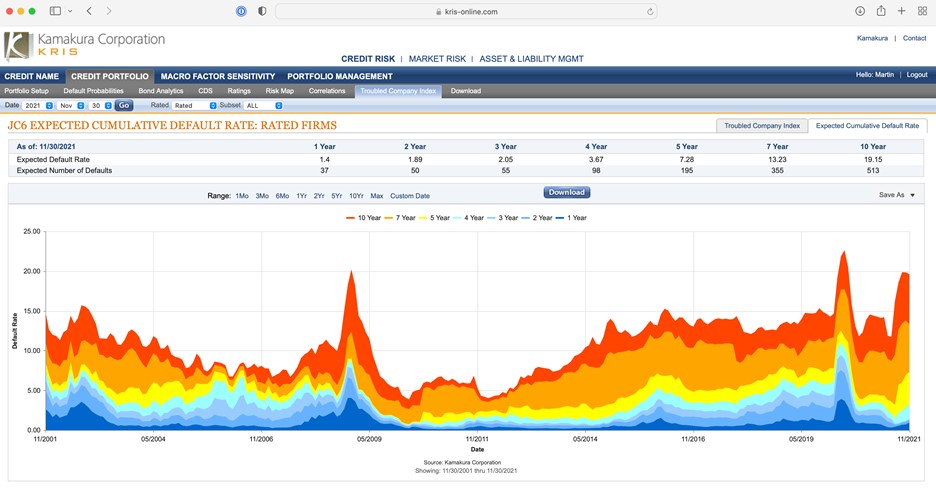 November began with markets debating inflation data and how quickly and aggressively central banks will respond. The markets also focused on who would be nominated as the Federal Reserve chair and how the European Central Bank will respond to inflation numbers across Europe, especially in Germany. Another significant concern was whether Evergrande would make its November bond payment prior to the expiration of its grace period to avoid default – and fortunately, it did.

In the U.S., President Biden signed the $1 trillion infrastructure bill into law and the U.S. House of Representatives passed the President’s “Build Back Better” plan, sending the roughly $2 trillion social spending and climate bill to the Senate, where it is unlikely to pass in its current form.  In other words, most of November seemed like business as usual, or at least usual in terms of the new normal.

Then came Black Friday. The day is traditionally the start of Christmas shopping season in the United States, although with all the warnings of the supply chain mess, one must wonder whether shoppers started at Halloween this year. As it happens, the date was marked by the announcement of a new Covid variant called Omicron (I will leave the discussion of what happened to the Greek letters “Xi” and “Nu” for cocktail discussions).

Politicians, investors and lenders are now trying to discern what the emergence of this new strain means for markets, public policy and vaccines.  While its impact could be significant, there are too many unknowns to speculate about at this point, so our concerns must remain focused on the economic effects of fiscal and monetary policy, especially its unintended consequences.

Inflation continues to pressure central banks to take action before it becomes too late.  There is no doubt that after a long structural cycle of falling rates, we will see them rise again. Even with an increase, rates will remain low by historical standards, though they will seem high to many of the traders and lenders in today’s markets. Inflation is a puzzle more than a debate – it has proven to be unpredictable and stubbornly hard to contain once it gets going. The traditional anecdote says the Federal Reserve takes away the punch bowl just when the party is getting good. But one must wonder if this time, they plan on pulling it only after the effects of a hangover set in.

I would argue that a rise in short-term defaults is actually a good signal, as the lack of that red flag has created underwriting and trading activity likely to mask a bigger shakeout down the road. An increase in short-term default rates and a reduction in the expected longer-term cumulative defaults could in fact bode well for markets.

The best indicator of inflation is the medium-term Treasury markets, and the best indicator of default risk is the bond markets. I closely follow our CEO Dr. Donald van Deventer’s daily blog Corporate Bond Investor  in this regard to examine the daily attribution of risks as they relate to changes in bond prices. Table 2 below shows the one-month attribution as of November 30, 2021.

About the Troubled Company Index
The Kamakura Troubled Company Index® measures the percentage of 40,500 public firms in 76 countries that have an annualized one- month default risk of over one percent. The average index value since January 1990 is 14.35%.  Since November 2015, the Kamakura index has used the annualized one-month default probability produced by the KRIS version 6.0 Jarrow-Chava reduced form default probability model, a formula that bases default predictions on a sophisticated combination of financial ratios, stock price history, and macro-economic factors.

Kamakura has served more than 330 clients with assets ranging in size from $1.5 billion to $7.0 trillion.  Current clients have a combined “total assets” or “assets under management” in excess of $34 trillion.  Its risk management products are currently used in 47 countries, including the United States, Canada, Germany, the Netherlands, France, Austria, Switzerland, the United Kingdom, Russia, Ukraine, South Africa, Australia, China, Hong Kong, India, Indonesia, Japan, Korea, Malaysia, Singapore, Sri Lanka, Taiwan, Thailand, Vietnam, and many other countries in Asia, Europe and the Middle East.