A recent Wall Street Journal article[1] noted that trading activity in bank bonds, including bank holding companies [BHCs], is at higher than historical levels as a proportion of all traded US dollar bonds. BHCs are supervised by the same regulator as their subsidiary banks, and their capital balance and debt load is closely watched by the Fed. Subordinated debt is attractive to BHC issuers since it qualifies as Tier I supplementary capital. Under Basel and Fed rules, for subordinated debt to count as Tier I capital, bonds must have a minimum of five years original maturity and must be unsecured, non-callable, and subordinated to depositors.[2] Many investors are effectively doubling down on subordinated bank notes.

The chart in Figure 1, drawn from data downloaded from Kamakura’s online KRIS service, tracks five years of bond trading activity by sector. Although the WSJ article compares only banks and industrials, it’s apparent looking across all sectors that the bank/financials sector is by far the most heavily traded.

At the same time, deposits are up sharply at major banks. Bank deposits at Bank of America increased by $248 billion in the third quarter of 2021, or 15% year-on-year. Based on the Fed’s EDGAR facility, in the first quarter of this year BofA’s consumer deposits exceeded $1 trillion for the first time. Noninterest-bearing deposits grew by 25% YOY to $764 billion. New consumer checking accounts increased by 739,000, up 56%, and average consumer account balances were up by more than $10,000. So, as banks are flush with cash, they are busily increasing their long-term liabilities.

Using the KRIS enquiry function, it’s possible to see what’s happening in detail. We proceeded by examining a day’s trading activity in each of the two sectors. In Figure 2 and Figure 3 we first selected traded issues for the financials and industrial sectors for November 5th of this year, and then sorted by dollar volume. Price, yield, and spread are trade-weighted and averaged over multiple trades. For many traded bank issues in Figure 2, yields and spreads are left blank. This is due to the problematic calculation of spread-to-Treasuries for floaters and perpetuals. 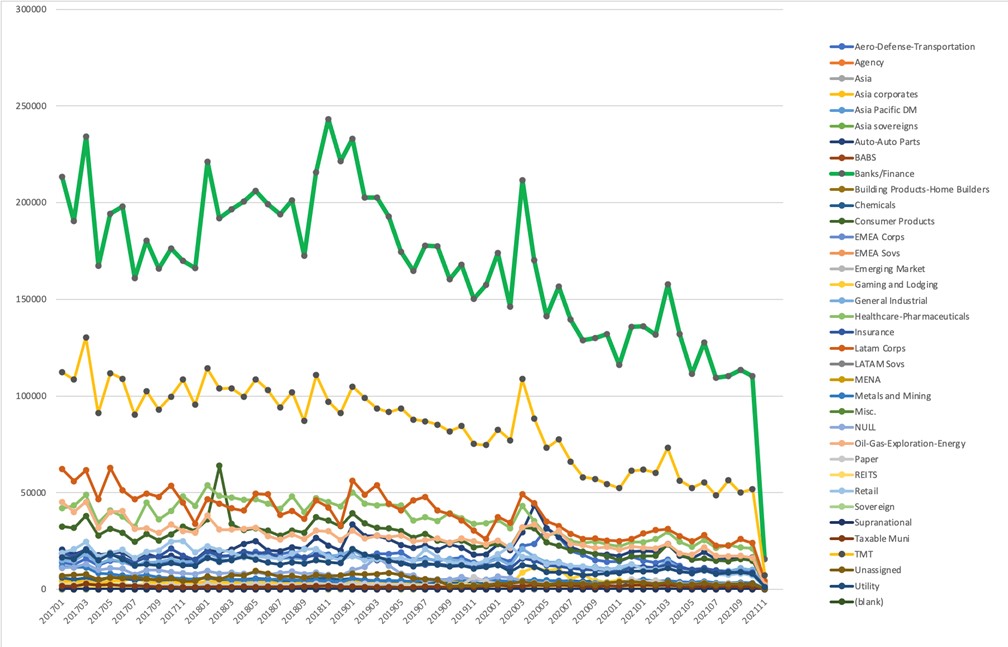 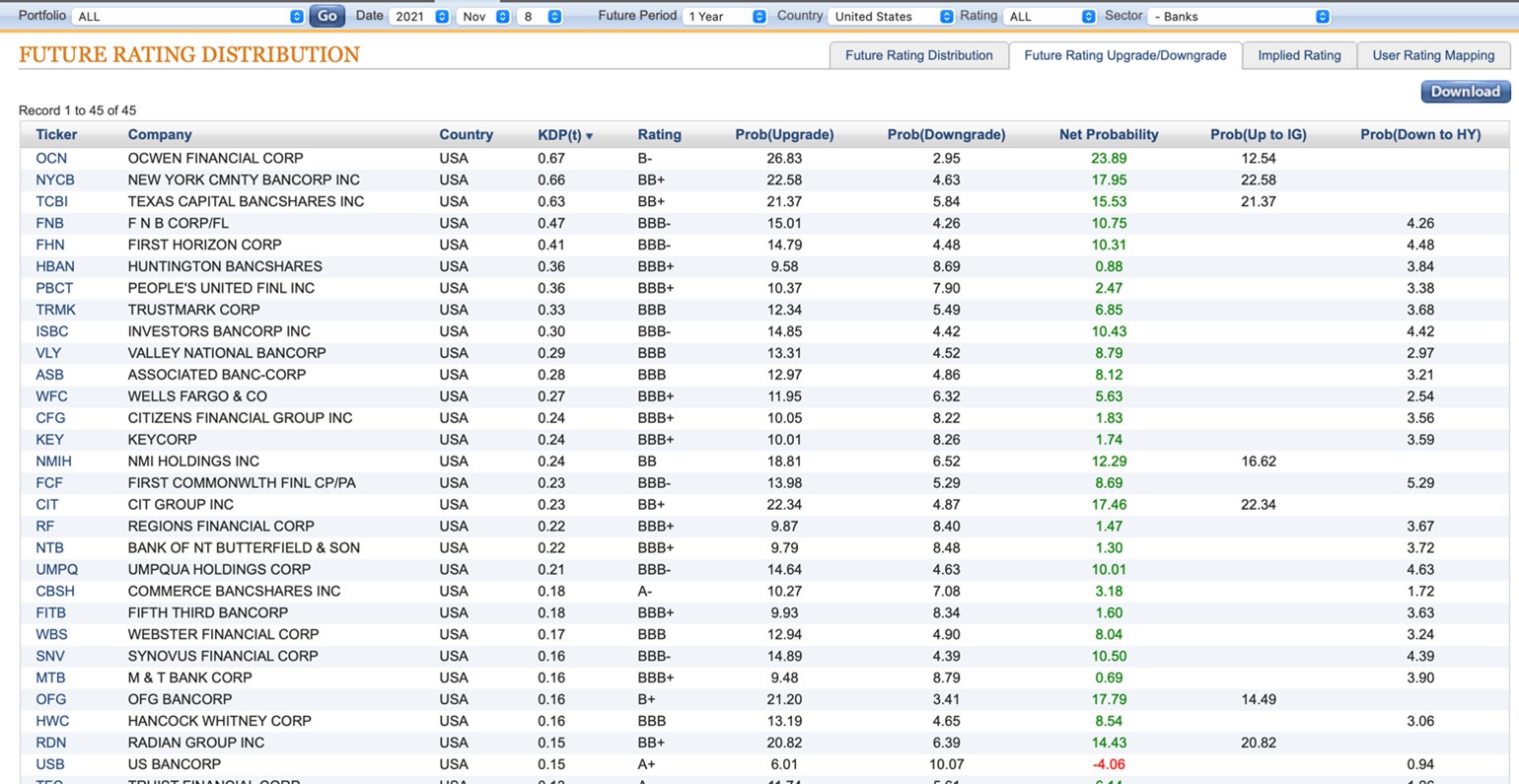 A Kamakura innovation to Fixed Income analysis is seen in the trade enquiry column titled “Spd/KDP”. It denotes a ratio between Kamakura’s default probability for each issue and its daily average traded spread. The ratio is updated daily, in contrast to common industry credit scores, which are updated far less frequently. Further, the spread-to-KDP derivation matches a bond’s maturity date with an exactly corresponding date along each issuer’s unique term structure of default probabilities. The importance of the distinction is reflected in the term structure of CDS market prices, which exhibit a clearly increasing cost of credit for longer tenors.

Spread/KDP, often referred to as spread alpha, is a measure of the magnitude of the average paid spread for a particular bond for a given day, relative to its risk of default prior to maturity. The higher the ratio of spread-to-default probability, the cheaper the bond relative to its risk, and the converse is also true. For fixed income managers, the ratio offers an indispensable handle on risk-adjusted bond pricing.

Most bonds don’t trade every day, but they trade frequently enough to chart a time series of trades, or in this case, spread alphas, as shown in Figure 4. The chart reveals how they traded through adverse economic conditions, changes in company profitability, share price volatilities, market leverage, etc. 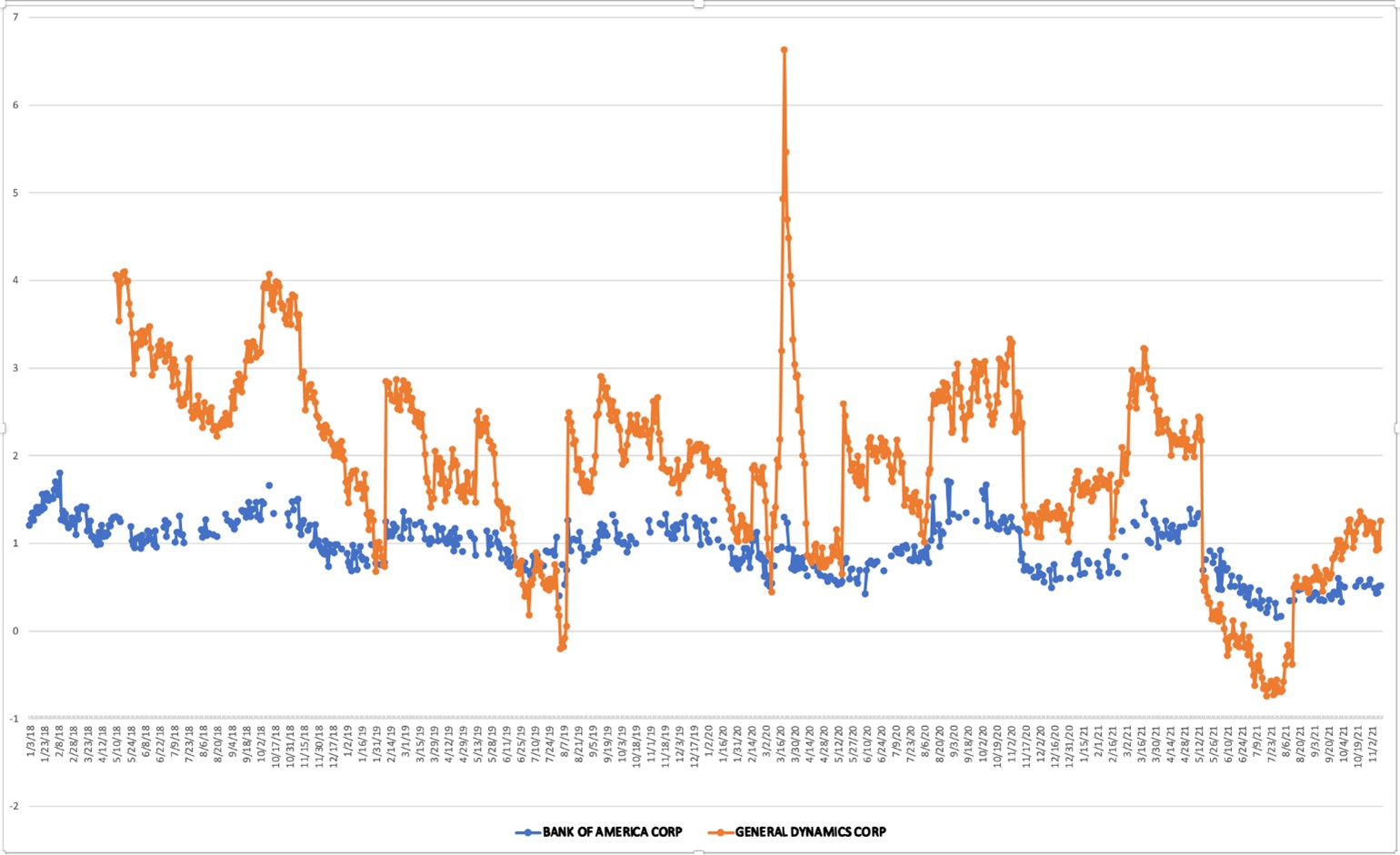 In addition to spread alpha, Kamakura offers Implied and Future Implied Rating Probability models. The implied rating model makes the calculation of cumulative rating probabilities possible across all rating grades. Practically speaking, this allows for estimating the probability of rating changes, like a notch up or down or a downgrade, to speculative quality. These probabilities are updated daily as model data inputs are received from sources such as regulatory filings, market exchanges, and macroeconomic data.

It is apparent in Figure 5 that there are inconsistencies between default probabilities and ratings. For instance, note that Keycorp has a lower default probability than Huntington Bancshares, but shares the same rating. If you’re an investor or regulator of financial institutions, this is something to keep an eye on.

Figures 6 and 7 illustrate the comparative traded spread between two similar bonds, one from each sector. Two years of traded spread for Bank of America’s [NYSE: BAC] 6.75% issue of Jun ’28 appears in Figure 5; same two years of spreads for General Dynamics [NYSE:GD] 3.75% issue of May ’28. Even with a higher coupon, the same seniority, comparable maturity, and an identical rating, the BAC issue consistently trades at a higher spread, as noted by the WSJ writer. In this case, the spread differential is calculated based on the exactly equivalent point on the U.S. Treasury curve, rather than to the nearest on-the-run Treasury issue. Note on the chart that the latter calculation is a user option.

Whether the objective is sector analysis, evaluation of selected companies, scenario testing, or the search for relative investment value, Kamakura’s online KRIS service offers a unique portal for risk managers and professional investors. Our models, together with bond market and CDS data, provide a means to cross-validate quantitative credit measures and securities markets, and to detect inconsistencies that can spell opportunity for investors.