What Happened to The Credit Cycle?

What Happened to The Credit Cycle?
Kamakura Troubled Company Index Decreases by 0.45% to 2.58%
Credit Quality Remains at the 100th Percentile

NEW YORK, September 2, 2021: Short- term default risk remains remarkably low, even as the expected cumulative default rate for 10 years exceeds the 10-year rate in September 2008 (the month that Lehman, AIG, FNMA, FHLMC and Washington Mutual failed).  Why are the markets seeing this behavior, and what are its implications?

The Kamakura Troubled Company Index® indicated that credit quality remained benign in August, with the index at 2.58% — compared to 3.03% at the end of July. Volatility also decreased, with default probabilities ranging from 2.87% on August 25 to 2.06% on August 12, representing a new period low for the index. The index reflects the percentage of 40,500 public firms that have a default probability of over 1%. An increase in the index reflects declining credit quality, while a decrease reflects improving credit quality.

Among the 20 riskiest-rated firms listed in August there were eight each in China and the U.S. and one each in Brazil, India, Ireland and Spain. The riskiest-rated rated firm was GTT Communications, Inc (OTCMKTS:GTTN), a U.S multinational telecommunications and internet service provider.  The firm had a 1-month KDP of 11.87%. There was only one global default in the Kamakura-coverage universe, which occurred in China. 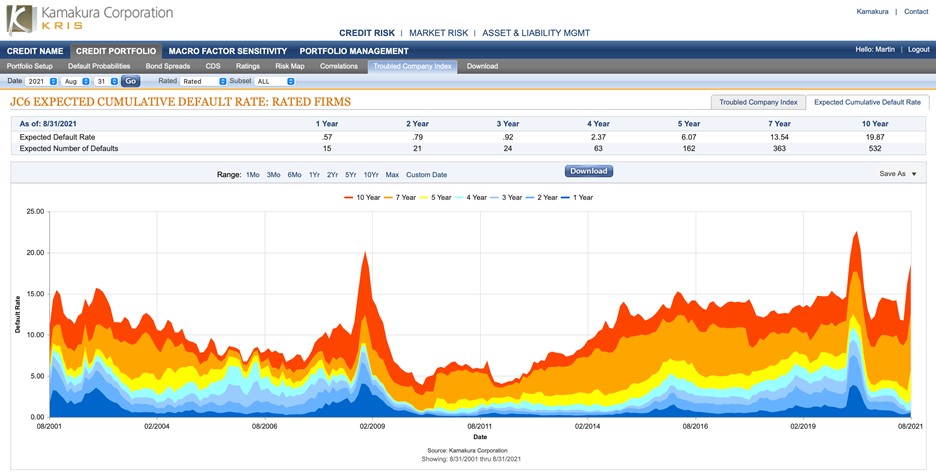 At the beginning of the pandemic, we saw a large increase in default probabilities, with the Troubled Company Index jumping to 35.3%. The index has since declined to 2.58%.  On the other hand, the 10-year expected cumulative default peaked at 22.65%, but has only come down to 19.9%.  What is driving the drastic differences between short- and long-term default predictions? 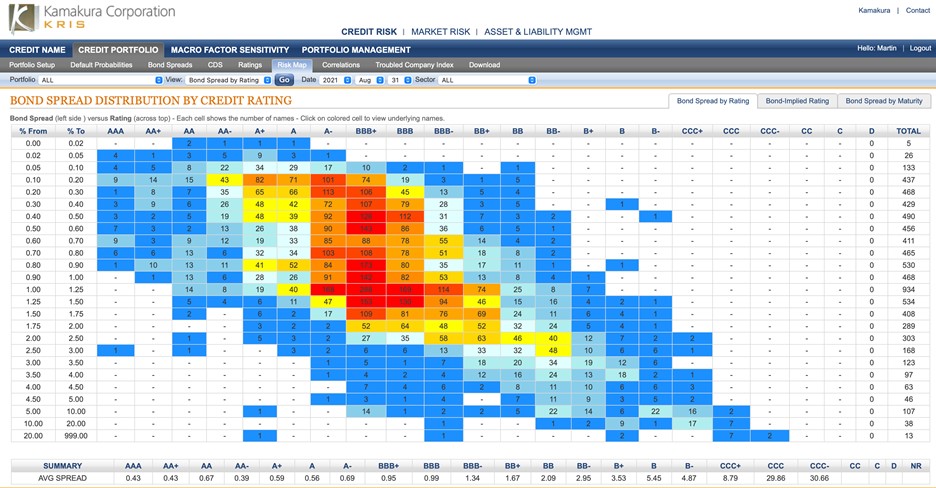 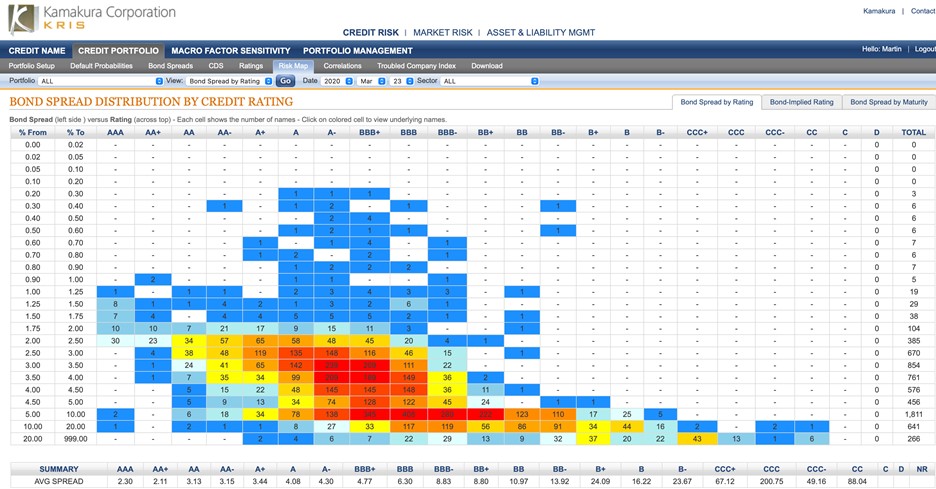 The KRIS term structure is composed of 120 logistic regressions with varying degrees of significance among the input variables.  An input such as cash on hand is more predictive in determining the 30-day probability of default than it is for the 10-year probability of default, to cite one example.  Market inputs such as volatility are another example of short-term risk factors, while macroeconomic factors are more significant drivers of longer-term risk.

Since the early days of the pandemic, we have seen unprecedented fiscal, monetary and government policy reactions.  They have ranged from shutdowns that caused the initial spike in unemployment to checks written directly to those who needed them (and some who did not).  The response has been so robust that the International Monetary Fund (IMF) has produced a compendium of policy responses to Covid-19.

There was significant uncertainty in the early days of the pandemic, and indeed, leveraged companies with the highest default risk did succumb quickly, resulting in an initial surge in defaults. But investors’ worst fears did not materialize. Instead, central banks stepped in with huge amounts of liquidity and low interest rates, combined with fiscal and government policy support.  In the U.S. alone, it is estimated that the coronavirus created a $300 billion hole in wages, which was offset by almost $2 trillion in stimulus.  With interest rates near historic lows, extremely strong investor demand and ample liquidity, corporations have had plenty of economic incentives to increase debt, resulting in strong cash positions.  With the demand for yield, it has been easy for both investment- and non-investment- grade firms to access the capital markets.

In addition to low rates, the earnings recovery has surprised many to the upside, creating the current environment of low defaults and low default risk, at least in the short run.  We are only now working through uncertainty about structural risks such whether inflation is transitory and how quickly supply chains can be rebuilt.  These tend to be longer-term risks, and account for the spike in expected defaults on the longer end of the term structure.

The liquidity cushion built up by corporations creates a window for firms to manage their leverage and provides investors with an opportunity to be selective in positioning their portfolios.  One can argue that the credit cycle has not been repealed —  it has just been deferred, given the fiscal and policy responses. This is a good opportunity to stress-test longer-term risks, such as inflation or interest rate increases.

These factors continue to play out in the bond market ahead of the equity or bank loan markets. Kamakura CEO Dr. Donald van Deventer addresses the current situation in his daily blog, Corporate Bond Investor, which examines attribution of risks as they relate to changes in bond prices. The table below shows the one-month attribution as of August 31, 2021.

By taking advantage of the current low and stable default risk — and knowing which sectors or firms to avoid due to above-average risk profiles — you can now attractively position your portfolio for the long term.

About the Troubled Company Index
The Kamakura Troubled Company Index® measures the percentage of 40,500 public firms in 76 countries that have an annualized one- month default risk of over one percent. The average index value since January 1990 is 14.43%.  Since November 2015, the Kamakura index has used the annualized one-month default probability produced by the KRIS version 6.0 Jarrow-Chava reduced form default probability model, a formula that bases default predictions on a sophisticated combination of financial ratios, stock price history, and macro-economic factors.

Kamakura has served more than 330 clients with assets ranging in size from $1.5 billion to $7.0 trillion.  Current clients have a combined “total assets” or “assets under management” in excess of $28 trillion.  Its risk management products are currently used in 47 countries, including the United States, Canada, Germany, the Netherlands, France, Austria, Switzerland, the United Kingdom, Russia, Ukraine, South Africa, Australia, China, Hong Kong, India, Indonesia, Japan, Korea, Malaysia, Singapore, Sri Lanka, Taiwan, Thailand, Vietnam, and many other countries in Asia, Europe and the Middle East.