The markets ended 2020 with a bang. There were gains across all of the indices, with the Dow up 6.5%, the NASDAQ up 43.2% and the NYSE FANG up 102.7%. IPOs boomed, and so did their valuations. Airbnb, for example, was valued more than Marriott International, Hilton Worldwide Holdings, Inc., and Hyatt combined. Gold closed up 24% and China’s stock market was up 27%. Britain finally exited the EU. And of course, coronavirus stimulus packages were introduced globally.

Given the fact that markets generally reflect future expectations, should we be upbeat?

The Kamakura Troubled Company Index® indicated that credit quality declined in December, with an increase 1.08% over the month to 15.06% and an increase over the year of 2.16%. It ended the month at the 35th percentile. The index continued to be volatile, ranging from 13.6% on December 8 to 16.21% on December 21. For the year, the index ranged from a low of 10.35% on January 20 to a high of 35.3% on March 23. The index reflects the percentage of 40,500 public firms that have a default probability of over 1%. An increase in the index reflects declining credit quality, while a decrease reflects improving credit quality.

At 15.06%, the Troubled Company Index declined to the 35h percentile of historical credit quality as measured since 1990.

Among the 10 riskiest-rated firms listed in December, nine were in the U.S., with one in Japan. The riskiest-rated firm remained Highpoint Resources (NYSE:HPR), an energy exploration and production firm. We had five defaults in our coverage universe, with three in the U.S and one each in France and Great Britain. For the year, there were 77 defaults in the US, with two thirds coming from the energy and consumer discretionary sectors. 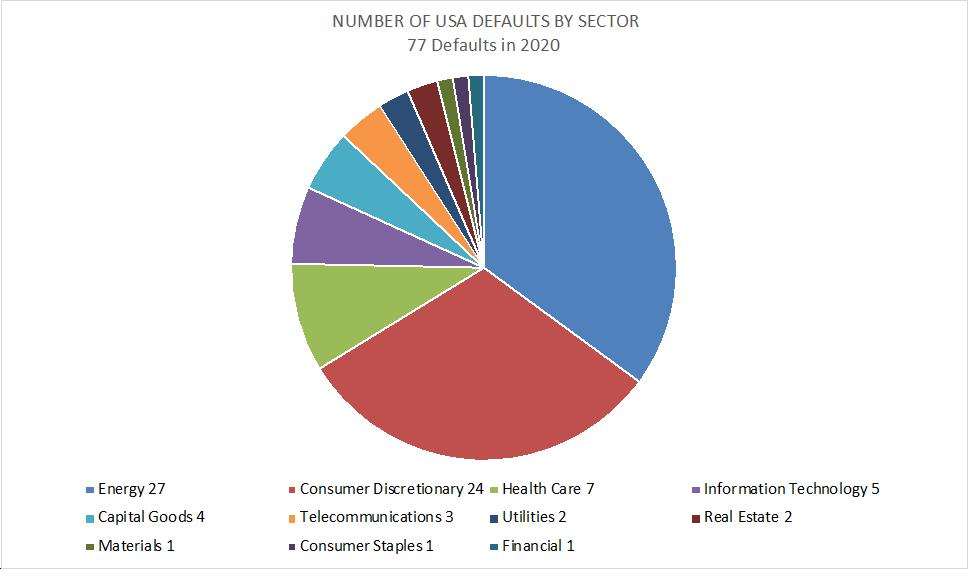 The Kamakura expected cumulative default curve for all rated companies worldwide widened, with the one-year expected default rate increasing by 0.06% to 0.86%, while the 10-year rate increased by 0.68% to 15.38%.

The markets rallied over the year, responding to low interest rates, government stimulus, optimism around the Covid-19 vaccine rollouts, and market intervention by the central banks around the globe. Federal Reserve President Jerome Powell called for more stimulus, as did his peers at other banks.

But despite the positive market news, not all sectors benefited. Restaurants, theaters and many small businesses are struggling for survival. The KBW Bank Index dropped 14.2% over the year. It is worth asking whether the banks’ view of future losses is more realistic than the capital markets’ view, especially considering that debt issuance expanded dramatically during the year. Particularly worrisome is corporate debt, which expanded much faster than the earnings needed to support the increased leverage.

Is the market rally real, or is it simply a reaction to massive government intervention into the markets, distorting price discovery and investment fundamentals? Central banks seem to believe that the solution for too much debt is … more debt. But interventions always have unintended consequences, and current fiscal and monetary policy should put investors and lenders on guard, despite the old adages “Do not fight the tape” and its corollary, “Do not fight the Fed.” The present global situation calls for caution and extreme nimbleness on the part of portfolio managers.

As we enter the new year full of hope that 2021 will be very different from its predecessor, we need to ask more questions than ever about the risks that lie like icebergs just beneath the surface. Are our risk tools adequate? Are we using our financial X-rays and MRIs to identify risks that can be disruptive and dangerous for our portfolios?

About the Troubled Company Index
The Kamakura Troubled Company Index® measures the percentage of 40,500 public firms in 76 countries that have an annualized one- month default risk of over one percent. The average index value since January 1990 is 14.55%. Since November 2015, the Kamakura index has used the annualized one-month default probability produced by the KRIS version 6.0 Jarrow-Chava reduced form default probability model, a formula that bases default predictions on a sophisticated combination of financial ratios, stock price history, and macro-economic factors.