Authors from the North American Client Team:
Warren A Sherman wandrewsherman@kamakuraco.com
Mark Slattery mslattery@kamakuraco.com
Eric Penanhoat epenanhoat@kamakuraco.comNEW YORK, November 18, 2020: “Investing in CLO Combo Notes allows the investor to invest in lower-rated CLO debt with high-yield returns, while achieving a nominally investment grade rating.”Through creative structuring and the legerdemain of agency rating models, Combo Notes are consistently awarded a higher rating than their underlying CLOs. The underlying loan collateral is identical, but Combo Notes restructure the tranches so that monthly interest payments are applied to pay down principal rather than disbursed as coupon payments to Combo Note holders.

This permits insurance investors to buy and hold lower-rated CLO collateral at ratings grades that avoid higher corresponding capital charges. With a nod to the great Stanley Kubrick, it seems there’s a certain amount of willful visual impairment going on here.At the least, ratings agency attitudes toward CLOs and Combo Notes have been quixotic and are sometimes inexplicable.

While the idea of pooling and securitizing loan debt has considerable appeal from an investor perspective, the true risk of correlated default must be accurately evaluated. During the 2007-8 financial crisis, more than 13,000 AAA rated CDOs defaulted. To avoid a repetition, the risk analysis must proceed from the individual loan level and loan obligor default probabilities, rather than from reliance on the estimation of Conditional Default Rates (CDRs), or credit ratings assigned to the senior tranches of CLO structures. It is common for the junior tranches not to be rated at all, and ratings for individual loans are infrequent, given that many of the loan obligors are unrated.

In our approach, the functional relationships between relevant macro variables and loan defaults are first determined, then applied in large-scale Monte Carlo simulations by which the impact of changes in selected factors on loan default probabilities can be assessed. The best practice in loss simulation is that in which selected macro factors are the drivers, rather than ratings transitions (which is the NAIC standard), or historical sector default rates, as is often done.

Determining risk factor coefficients for macro factors provides a mathematical link between the factors and loan obligor default probabilities. While independent, the factors exhibit correlated movement and, by means of a modern simulation engine, the correlations themselves can be user manipulated and stress-tested. Bad correlation assumptions were at the heart of the financial crisis and its securitized mortgage debt. (Perhaps it’s an opportune time to watch “Margin Call” once again!)

The argument by which the reduction of principal constitutes a credit strategy is elusive. Certainly, there’s a calculable impact on LGD and recovery rates. But the loan collateral is the same, except for the addition of Treasuries for Combo Notes when that’s the case. Obligor and loan defaults are subject to the same macro factor impacts, so there’s no reason to assume that loan collateral will be more resilient.

Of course, this is an example of regulatory arbitrage, since the NAIC assesses capital reserves based on ratings assignments. Note that most Combo Notes comprise mainly unrated CLO tranches, so investors aren’t even getting the benefit of ratings agency scrutiny down the stacked tranches.

Interestingly, CLO issuance has increased over the year, despite sharply dropping sales and revenues for many industries typically favored in securitized structures (Figure 1). According to Bloomberg,October’s sales of $13.8 billion made it the busiest CLO sales month since early 2019. 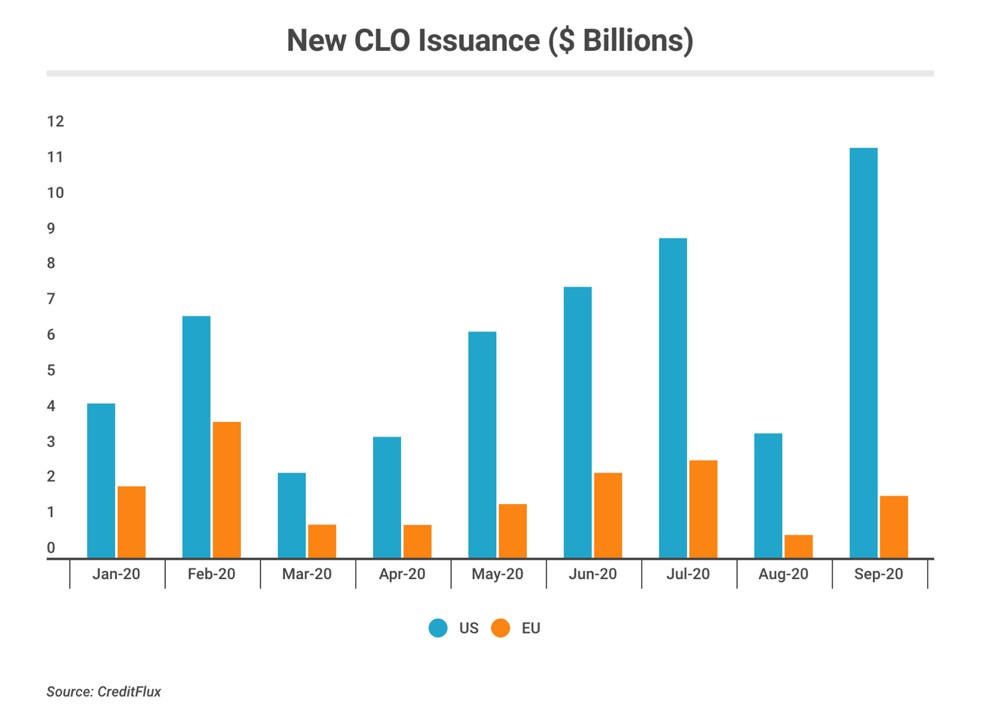 The panel below is excerpted from Kamakura’s KRIS/Credit Portfolio Manager, an online solution for asset managers, institutional investors, banks, and hedge and pension funds. The solution is a generalized asset management and simulation engine capable of parameterizing models for credit-risky securities, then simulating those factors in order to evaluate their default probabilities and implied losses (Figure 2).

The tab “Tail Risk” (Figure 5) pulls together the simulated factor values and the corresponding portfolio losses given the vectors of factor values, reading across each row. Either Kamakura or user-specified default functions can be used to relate the factor values to default probabilities and to simulated default events through a time-to-default formula. The display matrix can be sorted by any of its columns, and the factor values presented by their nominal values, or the absolute or percent value of the changes. Analysts can thereby focus on specific factors, forecast values, and expected losses based on specified confidence thresholds. 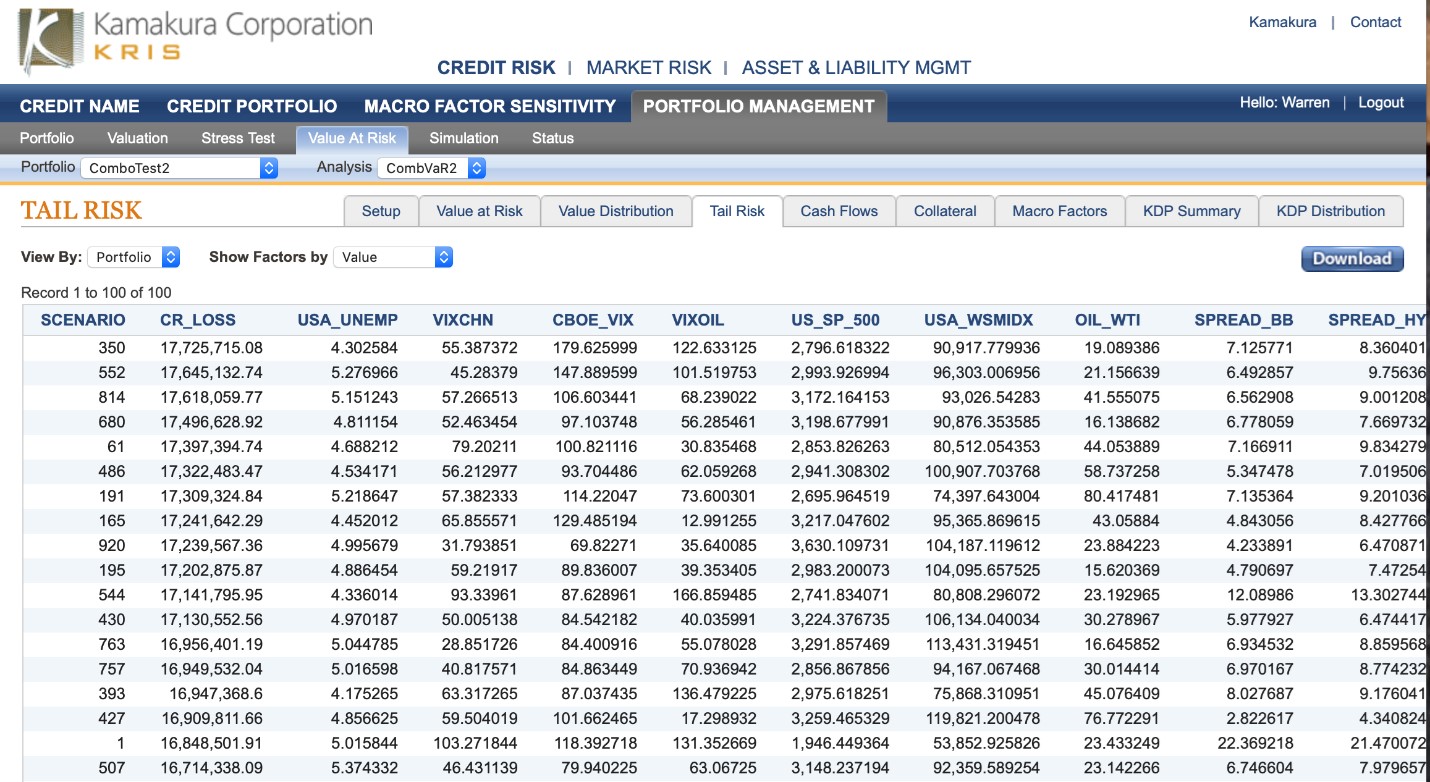 Lastly, KRIS/CPM exposes the complete distributions of the risk factors that drive the simulated default probabilities (Figure 6). So, from the calibration of individual loan obligor default probability functions, to the simulated values of risk factors and their correlations, and even down to the outcomes of individual scenarios, everything that enters the analysis and is returned as outputs is completely transparent. There are no hidden formulas, no ordinal ratings matrices, and no assumed prepayment or recovery rates that can’t be independently user-specified and evaluated.

The loan-level depth and detail of the analysis of KRIS/CPM is unique in the industry. It can help investors and CLO managers protect portfolio values, make better loan trading decisions, and provide reassurance to institutional and fund executives, board members, and shareholders. For a free trial and demonstration, please contact Martin Zorn mzorn@kamakuraco.com.