The Silver Skates Of Default

NEW YORK, July 1, 2020: In 1865 American author Mary Mapes Dodge published “Hans Brinker; or the Silver Skates: A Story of Life in Holland.” The story, which introduced the sport of Dutch speed skating to Americans, also contained a memorable subplot about a boy who put his finger in a leaking dike, preventing a disastrous flood. It’s a good story, but in reality, dikes with structural flaws do not leak. Instead, whole sections collapse at once.

In 2020, many wonder whether central banks and the governments supporting them will be able to stop the leak in the dike of insolvency, like the legendary Hans Brinker, or whether they must face a new reality as the dike breaks and the wave of defaults becomes unstoppable. At this point in the cycle, defaults have primarily come from companies that were overleveraged especially in industries that were already under stress and had declining sales or margins or were reliant on loose underwriting to roll over debt. As we look forward, the question will be whether collateral damage of the pandemic will cause insolvency for companies that were not considered at risk six months ago. Low rates have driven many investors to seek yield in companies that were considered prudent risks at the time, but whether they will remain so in today’s uncertain environment is difficult to say.

The Kamakura Troubled Company Index® improved in June, with the decline of 6.13% to 25.58% compared to May 29 and ended the month at the 13th percentile. The index continued to be highly volatile, ranging during the month from 25.58% to 31.94%. The index reflects the percentage of 40,500 public firms that have a default probability of over 1%. An increase in the index reflects declining credit quality, while a decrease reflects improving credit quality.

At 25.58%, the Troubled Company Index improved to the 13th percentile of historical credit quality as measured since 1990.

Among the 10 riskiest-rated firms listed in June, seven were in the U.S, with one each in Australia, Great Britain, and Norway. The riskiest firm remained Noble Corporation PLC with a one-month KDP of 66.85%, down 18.20% over the past month. We had 19 defaults in our coverage universe over the past month, bringing our three-month running total to 50. Eleven were in the U.S., with two in China and one each in Australia, Chile, Germany, South Korea, Thailand, and the UK. While defaults remained concentrated in energy-related firms, we are starting to see the default contagion spread to other sectors. 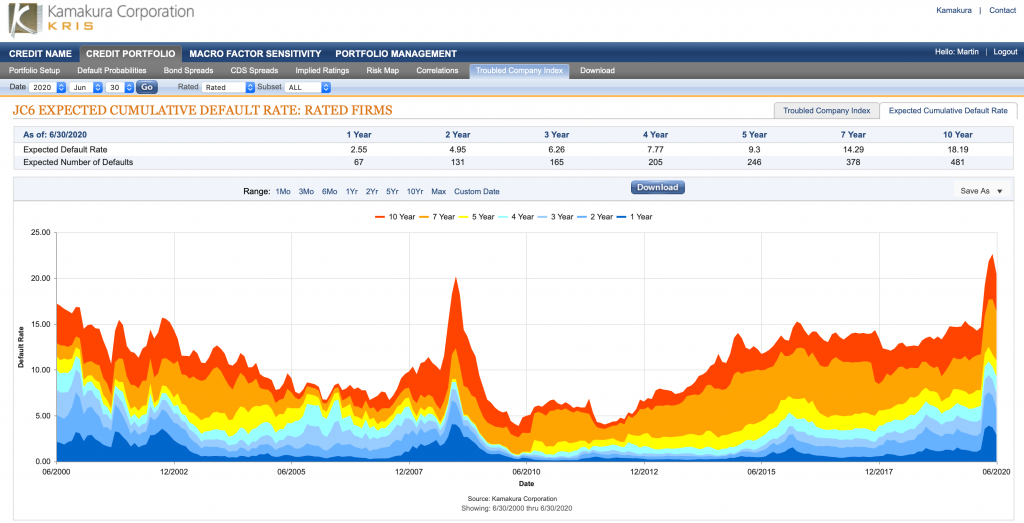 The Kamakura Troubled Company Index® certainly paints a different picture than the equity indices. The Federal Reserve’s announcement on June 25 of the results of its stress test and additional coronavirus-related sensitivity tests provided assurance of the strength of the banking sector, though it also announced the need for the sector to maintain capital levels. The accelerating rate of defaults provides more than ample concern about the ability of banks and investors to absorb the losses. The following table shows the year- to- date defaults in the U.S. We will release a global snapshot shortly. 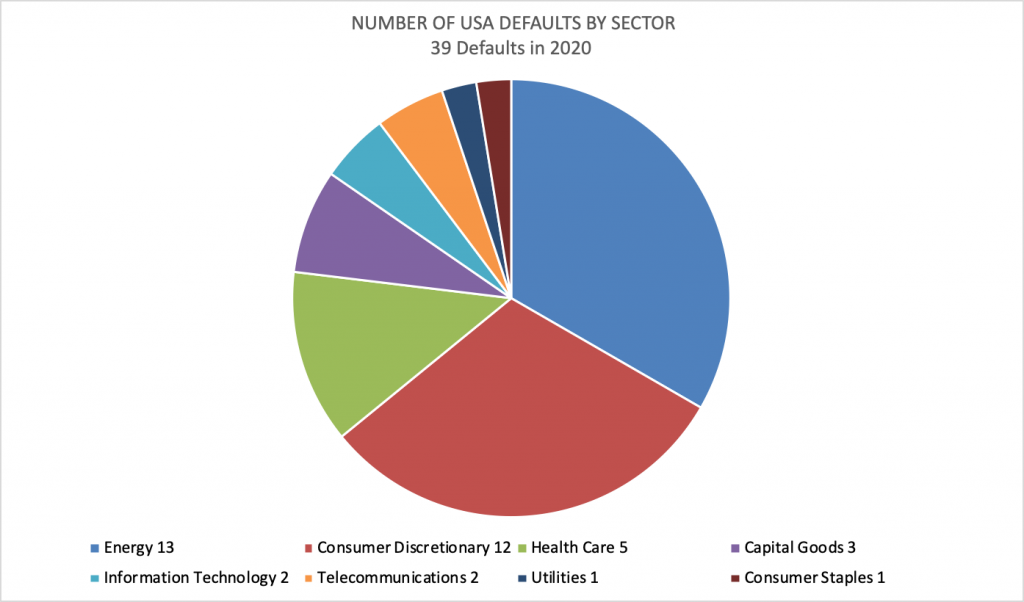 As the quarter ends, we will be analyzing the default data on a country and sector basis and will release additional commentary over the next few weeks.

About the Troubled Company Index
The Kamakura Troubled Company Index® measures the percentage of 40,500 public firms in 76 countries that have an annualized one- month default risk of over one percent. The average index value since January 1990 is 14.50%. Since November 2015, the Kamakura index has used the annualized one-month default probability produced by the KRIS version 6.0 Jarrow-Chava reduced form default probability model, a formula that bases default predictions on a sophisticated combination of financial ratios, stock price history, and macro-economic factors.