In the Land of Alpha, Default Term Structure Models are King

In the Land of Alpha, Default Term Structure Models are King.

NEW YORK, May 20, 2020: Kamakura’s KRIS online service enables the investigation of three of the most interesting and useful bond metrics: spread, rating, and default probability (PD).

As shown in Figure 1 below, the KRIS database contains 77 publicly-traded, A- rated U.S. companies. The fourth column, Kamakura Default Probabilities [KDP], ranges from Wells Fargo at the top, with 1,458 basis points (bp), to Biogen, at the bottom of the second page (not shown here), with just 2 bp. That is a difference of nearly 1,500 basis points within the single rating cohort. The wide range naturally leads to questions such as “What accounts for the difference?, “”Why are PDs and ratings so starkly inconsistent”, and especially, “How can investors take advantage of, or even anticipate these differences?”

Note the final column to the right, which computes the percentile of each within the overall default probabilities distribution of A-minus rated firms. This is useful in analyzing performance within the cohort. The other columns indicate changes along the issuer’s full term structure of default probabilities– a useful construct, as we’ll see below. 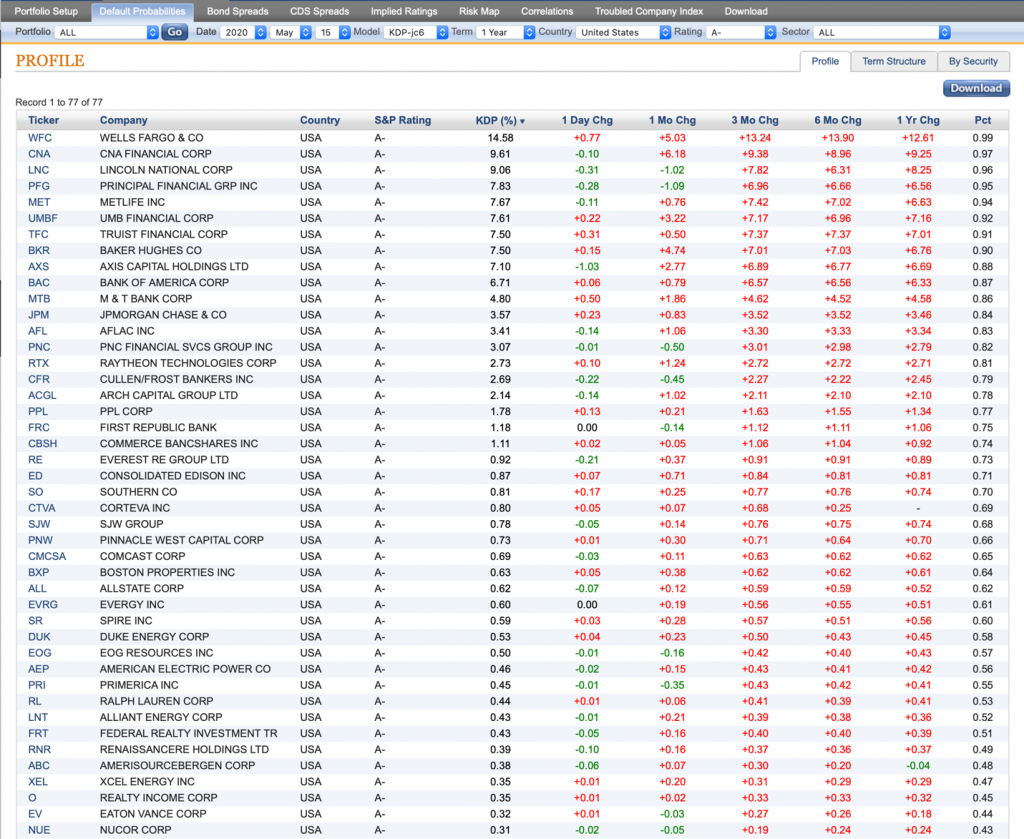 An intriguing validation of the reduced form credit model comes from a comparison of default probabilities and bond spreads, as seen in the figures below. To illustrate, we selected a name from the list, i.e., Allstate Insurance, rated A-, and compared its three-year default probabilities for the prior year with traded bond spreads for its 3.15% callable, senior bond maturing three years from now in 2023. The latter data is furnished by FINRA’s TRACE. FINRA collects bond trades from brokers and dealers within minutes of execution, including broker-to-broker and dealer trades. Information from over 645,000 registered individuals associated with nearly 3,500 reporting firms is included in this data set.

The graphs in Figure 2 and Figure 3 demonstrate the relationship between traded spreads and the debt issuer’s matched-maturity default probabilities. The PDs are updated daily in KRIS, while bond spreads are averaged on a trade-weighted basis over each day’s trading activities. Note that neither bond spreads nor bond prices are used as inputs to the reduced form models. The results, to the advantage of investors who have access to KRIS data, derive from completely divergent sources.

It’s understood by investors and quantitative analysts alike that spreads impound more than merely credit. When the credit premium of spreads can be quantified with precision, it is possible for investors to segregate credit and liquidity components, which is to segregate the primary risk components. In turbulent times when liquidity matters most, investors who are poised to sell liquidity can earn extraordinary returns.

A unique KRIS calculation was created to facilitate the search for liquidity premiums. It was dubbed “spread-alpha” in a paper authored by JP Morgan Asset Management, published in the company’s Investment Insights series (March 2014). Specifically, the calculation divides the daily, weighted average spread paid for a given bond by the default probability of the debt issuer on a matched-maturity basis. As alluded to above, this is where the capability of KRIS to generate and update such term structures carries special value. KRIS is unique in its ability to bring together highly accurate default probability models and observed trade data.

The SPD/KDP column in Figure 4 below is where spread-alphas are reported in KRIS. This table includes all U.S.- rated debt issuers with a rating of A-. It ranges from 36.68 to 0.57 over a total of 1,047 outstanding issues. This data is based on reported trades for a specific date, May 5th, and a term structure of default probabilities for each issuer, which is updated daily. 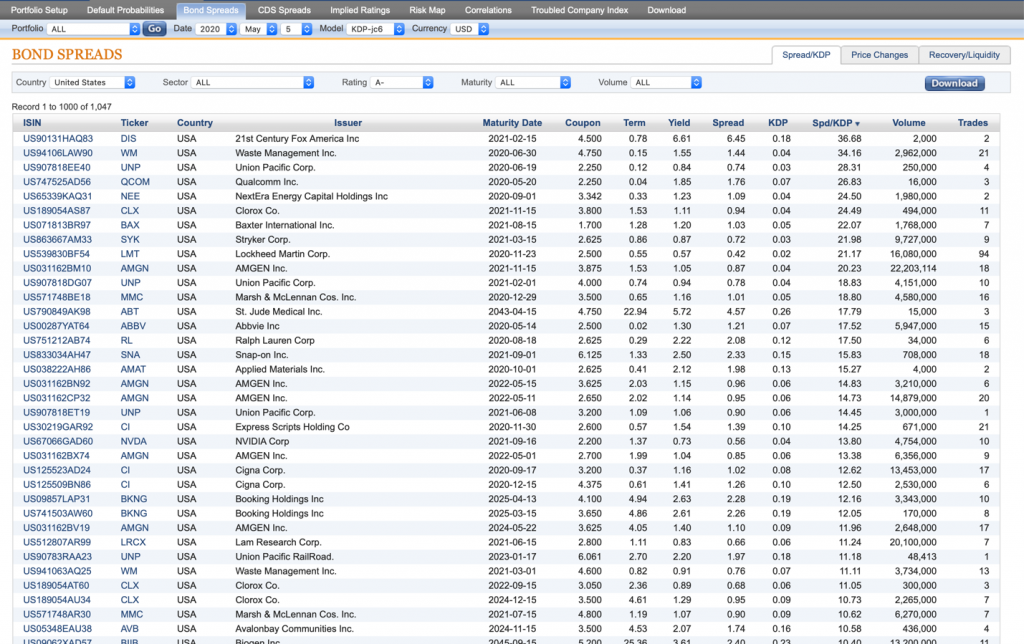 As you can see, in an industry where the number of asset management platform providers has dwindled to a handful, KRIS offers investors a powerful capability. To quote from the Investment Insights article mentioned above:

“Combined with an analytical tool kit proven to reliably dissect the constituent risk implicit in credit spreads, it positions them, perhaps uniquely, to put their liquidity to work acquiring solid bonds at bargain prices in outbreaks of market volatility. “

In addition, new models recently introduced into KRIS can separate liquidity and recovery rates, further helping investors investigate variances in market spreads. We will be discussing these innovations in an upcoming release.