Not Just A Virus Crisis

Not Just A Virus Crisis.
Kamakura Troubled Company Index Declines by 0.89% to 31.30%.
Credit Quality is at the 4th Percentile.

NEW YORK, May 1, 2020: The world’s attention has been focused on day- to- day updates about COVID-19: the number of positive cases and fatalities, questions about ending lockdowns, and news about vaccine development. All of these factors have translated into enormous swings in the market. A key part of the story is global credit conditions, which were already at the 14th percentile before the crisis started. Getting a handle on potential future defaults is dependent upon understanding the weaknesses that the virus crisis exposed.

These are indeed extraordinary times. The Federal Reserve bought $1.3 trillion of treasury debt in a single month. Everyone knew the Fed would come to the rescue, but how much rescue is needed and how much will create moral hazard? How much does intervention stabilize the markets and how much does it mask risk? Answers to these questions will emerge later. Our goal now is to examine the current metrics with a forward-looking bias so that we can anticipate and quantify the risks to come.

The Kamakura Troubled Company Index® stabilized with a small decline of 0.89% to 31.30% and remained at the 4th percentile. The index continued to be highly volatile, ranging during the month from 25.69% to 32.4%. The index reflects the percentage of 40,500 public firms that have a default probability of over 1%. An increase in the index reflects declining credit quality, while a decrease reflects improving credit quality. 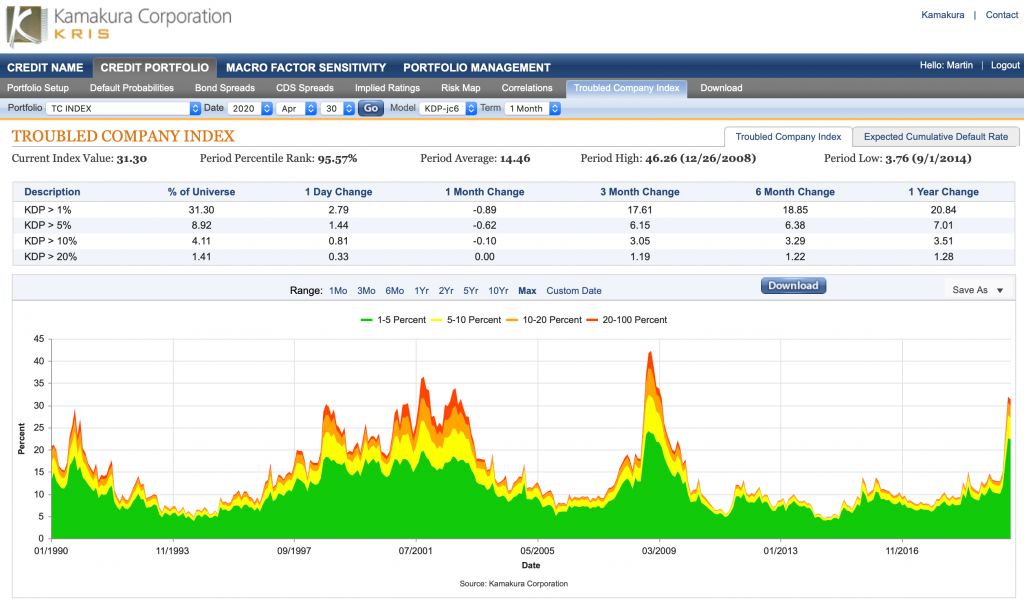 At 31.30%, the Troubled Company Index remained at the 4th percentile of historical credit quality as measured since 1990.

Among the 10 riskiest-rated firms listed in April, nine were in the U.S, and one was in Luxembourg. The riskiest- rated company in our coverage universe was Entercom Communications Corporation (NYSE:ETM), with a one-year KDP of 66.55%, up 11.65% over the past month. Six of the 10 riskiest companies were in the energy sector. We had 15 defaults in our coverage universe, with 10 in the U.S. and one each in Australia, Chile, Luxembourg, Singapore, and the UAE. The breadth of the failures show the global ramifications of current market conditions. 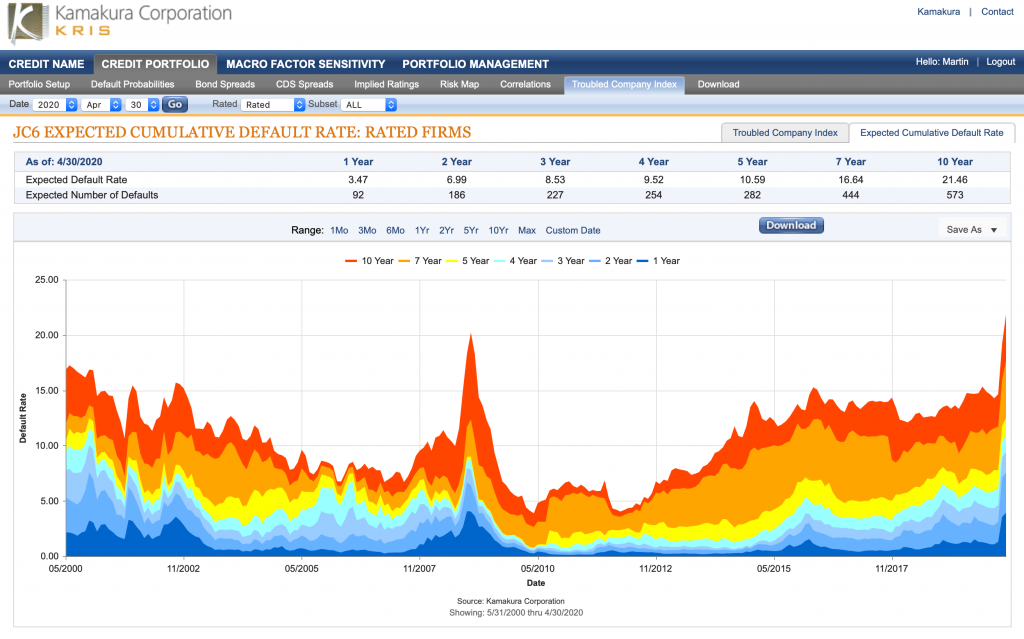 An important part of the current credit story is not the increase in the Troubled Credit Index or the Expected Cumulative Default curve. These tools have been flashing yellow warning signals for some time. Rather, the COVID-19 pandemic is the pin that has pricked the credit bubble building for the past several years. Concern was masked by the low one-year default probability, narrowed spreads, and a robust refinancing market that allowed firms to pretend and extend without defaulting.

After a long period of complacency, we believe that the current crisis is the trigger event. The Federal Reserve, as well as global central banks, are riding to the rescue. Governments are spending as needed to compensate for a mandated shut- down of the global economy. In my home state of Hawaii, our unemployment rate is now higher than it was during the Great Depression. Government intervention is creating a short- term floor for adverse economic consequences, but one of the unintended consequences may be masking longer- term risk in some cases.

Extraordinary times call for new tools to understand and manage longer- term risk. Over the past two weeks, we hosted two very successful webinars on the valuation of corporate bonds and performance attribution. These seminars can be found here:

These tools both help investors identify risk and allow them to understand the drivers of the risk, including default, recovery, and liquidity preferences. This is a challenging endeavor, since risks can be easily hidden in plain sight as a result of government intervention and markets often overstate them, given the difficulty traditional risk tools have in distinguishing real problems from false positives.

About the Troubled Company Index
The Kamakura Troubled Company Index® measures the percentage of 40,575 public firms in 76 countries that have an annualized one- month default risk of over one percent. The average index value since January 1990 is 14.41%. Since November 2015, the Kamakura index has used the annualized one-month default probability produced by the KRIS version 6.0 Jarrow-Chava reduced form default probability model, a formula that bases default predictions on a sophisticated combination of financial ratios, stock price history, and macro-economic factors.