MELBOURNE, April 6, 2020: From the desk of Andrew Cowton, Kamakura Market Manager for Australia.

The enormous disruption and loss of employment throughout Australia and across the world are likely to be felt for years to come. We must now consider whether the market has accurately realized the implications of COVID-19.

What we find interesting in Australia is that the playbook was actually written 14 years ago in a joint paper by current Australian Treasury Secretary Steven Kennedy, along with Jim Thomson and Peter Vujanovic. Its recommendations are manifest today in recent government policy actions.

Recently the government has committed ~$AUD200BLN+ to support the economy and people of Australia to attempt to mitigate recessionary impacts as Many other governments have reacted the same way as they confront the COVID-19 crisis.

The Reserve Bank has already lowered interest rates to a historic low of 0.25% (March 2020), and forecasts that they are likely to remain there for years to come. A key question is whether fallout from the epidemic will create further downward pressure and lead to negative rates. We must also consider the impact of the stimulus packages on the economy and on government spending and revenue. Government revenue will be under increasing pressure as tax receipts decline in the face of closed businesses and lost personal income during the same time the ~$AUD200Bln+ of additional spending is provided.

In addition, we have seen considerable falls across the share market, with the banking sector impacted heavily. Banks, regulators (APRA,) and the government are coordinating efforts to support repayment holidays or payment deferments for both business and personal customers for up to six months, with no penalties or strings attached.

Most of these short-term remediation measures are well-known. What is far from clear is the path forward after that. It will likely evolve in two distinct stages. The first stage will begin when viable treatment options for COVID-19 are approved and made available—likely procured from existing medicines in off-script use. That should lead to some relaxation of isolation requirements and a slight movement toward relative normality, though a full return to a pre-COVID-19 world is not likely until a working vaccine has been developed.

This scenario allows us to develop potential time lines for economic impacts. The general opinion is that the first stage is likely to last for at least six months, and the second to be 12- plus months away., If the current Australian stimulus packages are adjusted to these time lines, we there is a potential for government spending to double or even quadruple until such time as we see movement back to a new normal.

This raises the question of whether the markets have fully factored in the likely ramifications. For example, in six months, when current repayment holidays or deferrals reach their time limits, there will need to be a further evaluation about extending them or providing further government intervention. Policy and regulatory decisions made at this time will directly impact the banking sector’s capital base.

In looking at the impacts to date, if we compare the Australian Swap yield curve of October 2019 to that of early April 2020, and then compute the forward implied yield curves as at 30th Sep 2020. we can see that the curve moves negative for a number of years. 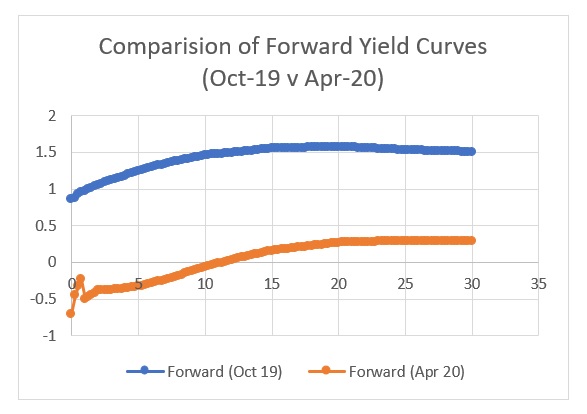 We also immediately see that while the shape of the curve has flattened slightly and the longer-term rate outlook is in line with RBA expectations, risk has not substantially increased–rather, it has returned to slightly below levels last seen around October 2019, despite an excess of ~$AUD200Bln+ of stimulus spending that has the potential to increase as the world moves through the COVID-19 period. 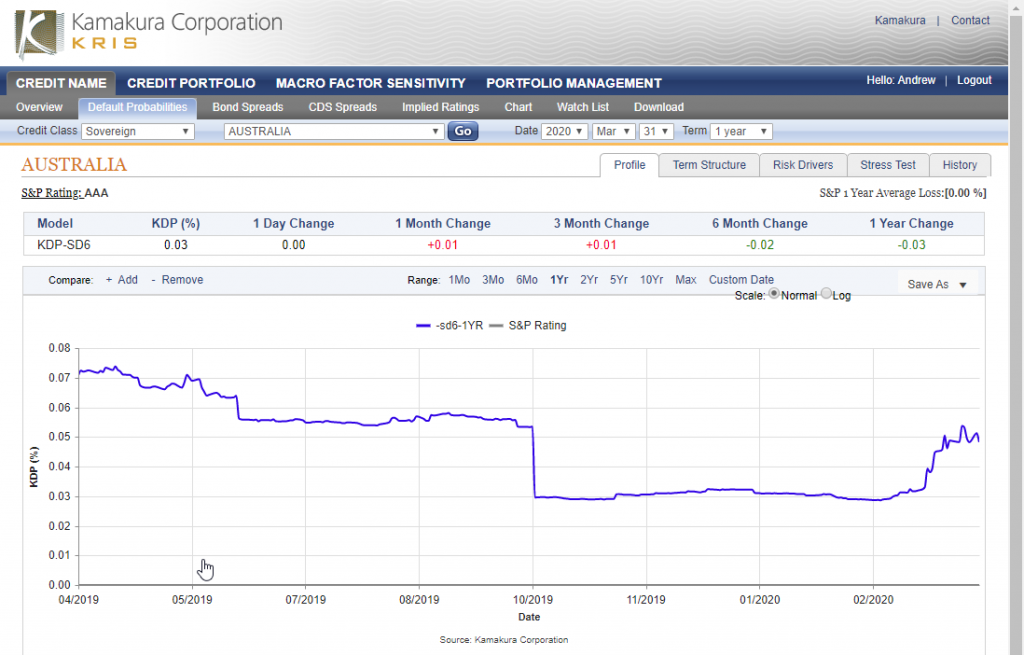 The increase in risk in the recent period parallels changes seen in increased risk seen in the United States (see Figure 3 below).

The clear implication of the chart above is that all risk models need to be able to accurately incorporate and both regulatory mandated and management stress testing with movements into negative rate territory in order to accurately reflect true underlying risk positions as well as incorporating the credit risk dimension that is not otherwise captured when interest rate risk is viewed in isolation.

Kamakura has served more than 330 clients with assets ranging in size from $1.5 billion to $3.0 trillion.  Current clients have a combined “total assets” or “assets under management” in excess of $26 trillion. Its risk management products are currently used in 47 countries, including the United States, Canada, Germany, the Netherlands, France, Austria, Switzerland, the United Kingdom, Russia, Ukraine, South Africa, Australia, China, Hong Kong, India, Indonesia, Japan, Korea, Malaysia, Singapore, Sri Lanka, Taiwan, Thailand, Vietnam, and many other countries in Asia, Europe and the Middle East.