NEW YORK, March 30, 2020: The disruption and dislocation across industries and markets from the coronavirus (COVID-19) pandemic continued through the week. Here’s a summary of some of the most important considerations:

Last month Federal Reserve Vice Chair Richard Clarida gave a presentation at the U.S. Monetary Policy Forum entitled “Financial Markets and Monetary Policy – Is There a Hall of Mirrors Problem?” Former Chair Benjamin Bernanke referred to the ‘hall of mirrors” problem as a situation in which central bank reactions and financial market prices interact in economically suboptimal and potentially destabilizing ways. Does this concept apply to the recent actions taken by U.S. and Canadian central banks?

On March 27, the Bank of Canada (Banque du Canada) held a press conference announcing its decision to lower the target for the overnight rate by 50 basis points to ¼ percent. This was an unscheduled rate decision that brought the rate to its effective lower bound.

Could we see negative rates in North America? How do we incorporate these actions into our models for future rates, and what impact are they having on the government bond markets?

As you can see from the next four charts, we have seen dramatic reductions in yields across the curve.

The movement in short term rates has been even more dramatic:

One of the questions we need to ask is whether we foresee negative rates. When we look at future T-bill distribution rates in Figure 8 below, we see that negative rates are indeed possible—even likely. The chart shows the distribution based on 200,000 scenarios using a 10-factor HJM model with daily data from 1962-2019 using stochastic volatility projected from March 20, 2020. In fact, on March 25, 2020, the Treasury Department reported zero interest rates for one to three months; on March 26, it reported a zero-interest rate for the three month yield. The number of factors required for each government yield curve has been thoroughly researched and is available from Kamakura. 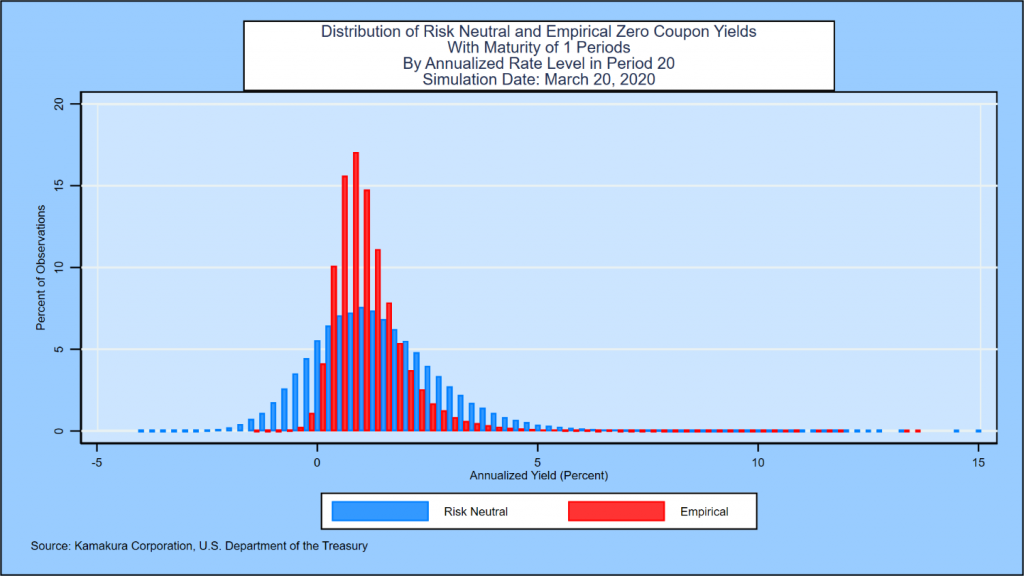 We have seen extraordinary actions by governments and central banks reacting in realtime to rapidly changing conditions on a day-to-day basis. Testing market values or calculating mark-to-model for instruments this quarter will require a different approach by market participants. Kamakura has detailed data for global rates, spreads and models, which are available to our clients on a subscription basis.