NEW YORK, March 21, 2020: The disruption and dislocation across industries and markets from the coronavirus (COVID-19) pandemic continued through the week. The Kamakura Troubled Company Index ® ended the week at the 3rd percentile, compared to the 14th percentile at the end of February. The Expected Cumulative Default Curve widened dramatically, with the one-year rate expanding from 2.20% to 4.14% over the month, while the 10-year rate grew from 14.82% to 21.27%. 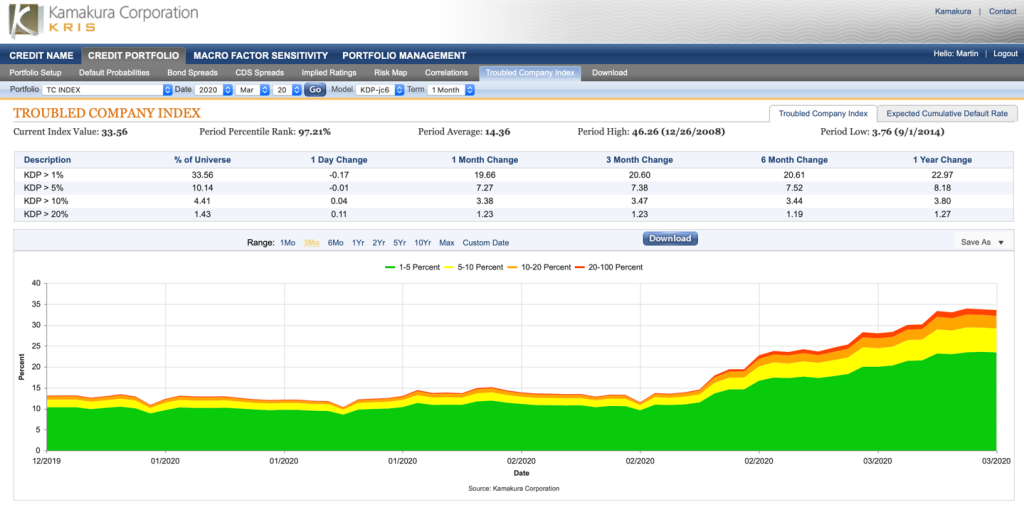 These default rates point towards decisive and coordinated action by central banks and a stimulative government fiscal policy. 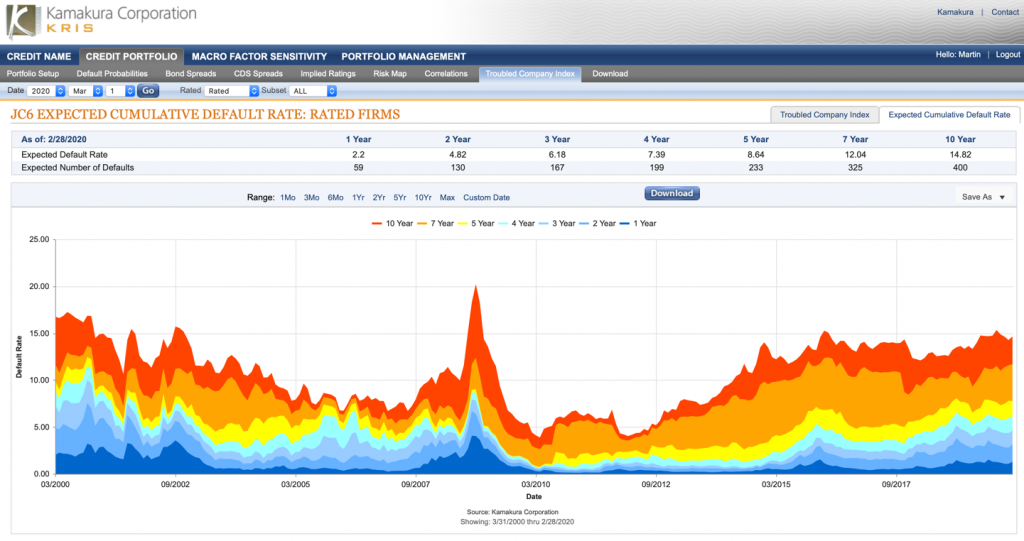 Not all sectors or companies are equally impacted by the current crisis. The set of tables below show the riskiest firms on a global basis, followed by similar lists for the U.S., Canada, Euro Area, Australia, Japan, and Southeast Asia. 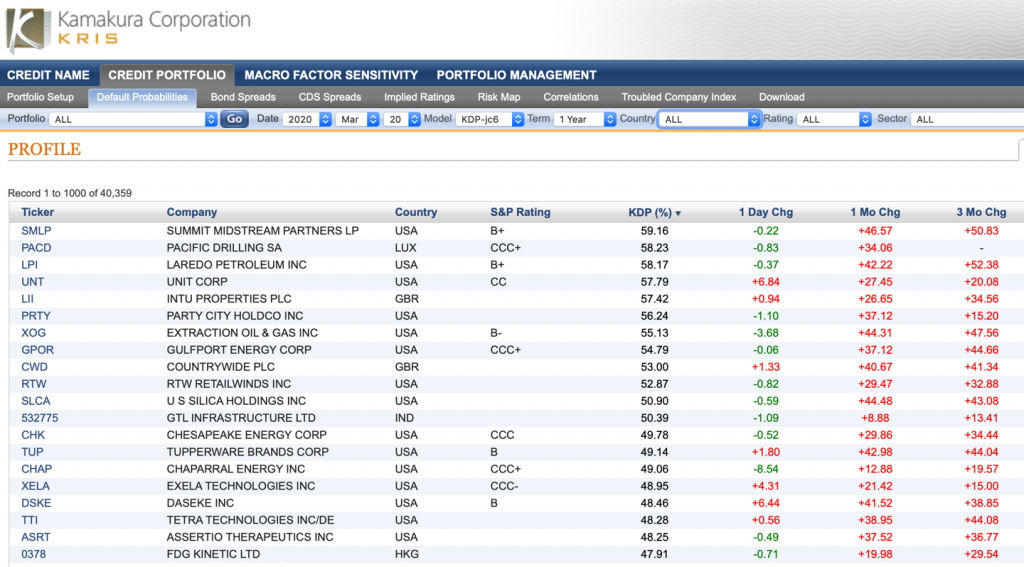 On the opposite end of the spectrum, a number of companies continue to have low KDPs. As you will see, we have observed spreads “blow out” for many corporate bonds. In addition, premiums for credit insurance have increased regardless of actual risk. The value of the reduced form model is to provide you with an unbiased quantitative measure of default risk. 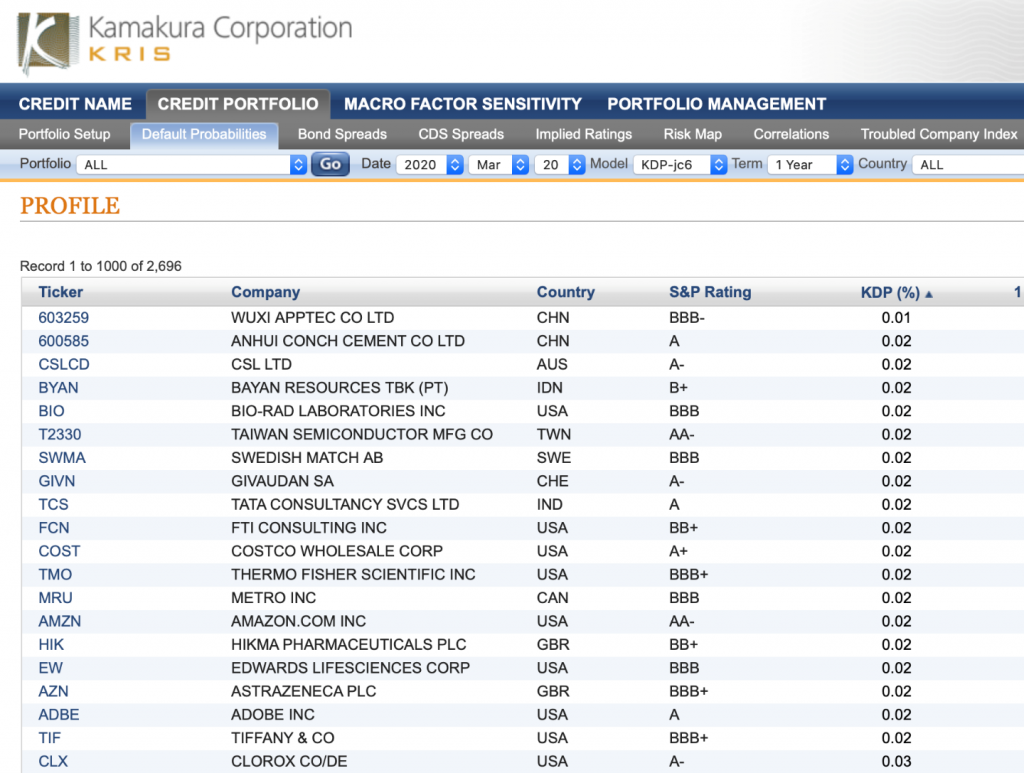 For another pertinent analysis of the markets, look at the Risk List to compare KDP to ratings. An insight from Figure 11 is that a large number of “A” rated firms with a default probability over 5% are financial companies. On the other hand, Figure 12 provides detail on “BBB” firms that have low KDPs. A dynamic measure such as a default probability provides much more realtime insight than ratings, especially in highly volatile times. 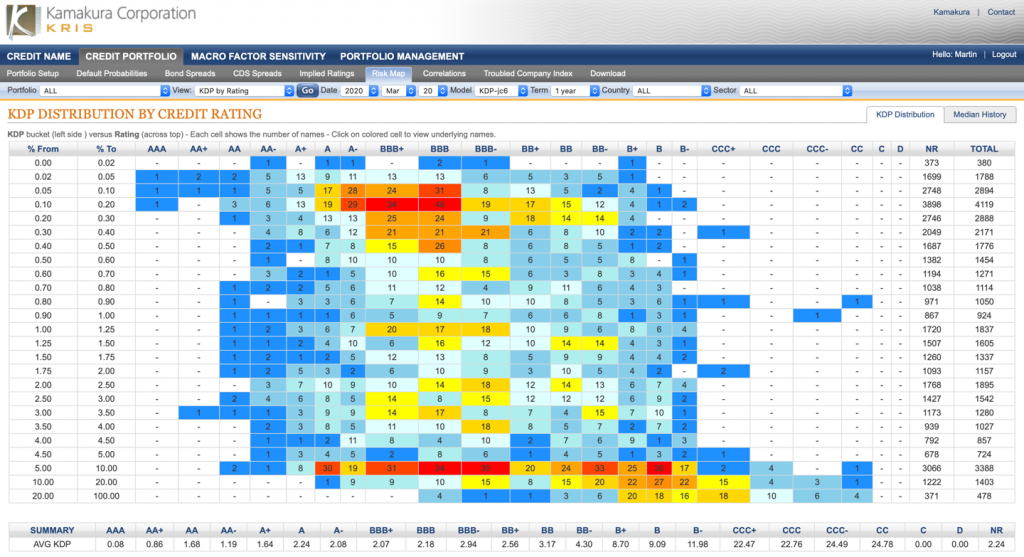 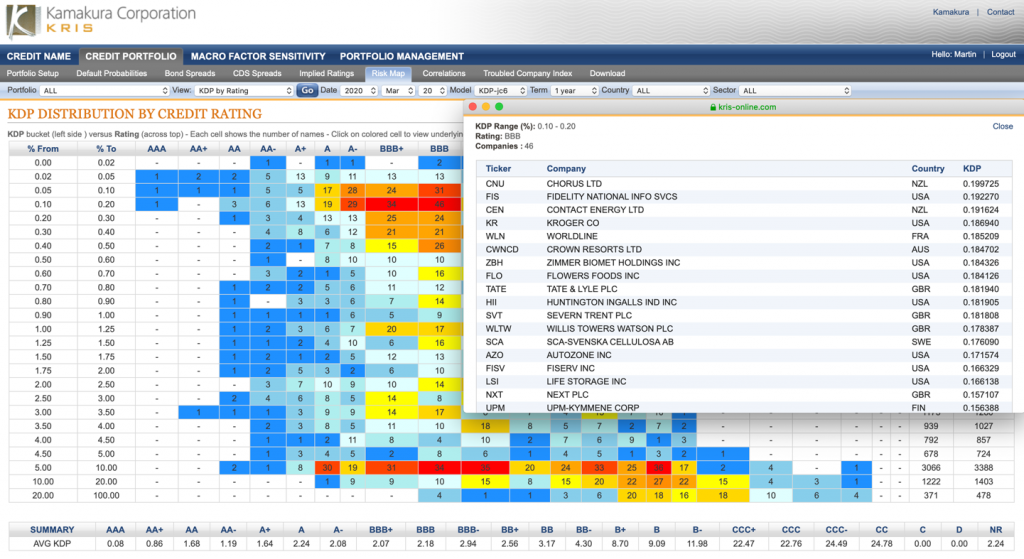 Another use of the Risk Map is to analyze the bond spread by KDP. You can see as of March 20, the riskiest firms (on the lower right in Figure 12) are receiving the largest spreads, though there are also a number of outliers on both ends of the spectrum. However, it is good to see that the corporate bond markets are functioning for the most part, despite volatility and uncertainty. 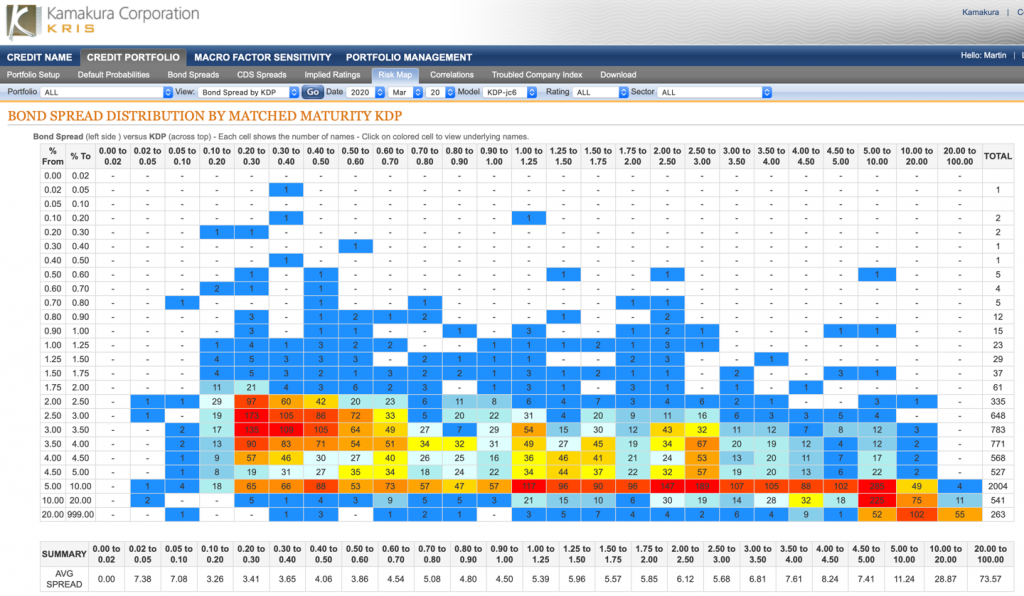 One long-term benefit of the Kamakura KRIS system is the enormous wealth of data it incorporates. We have over 1,400 market risk factors available “out of the box” to our existing clients. Using KRIS will be critical for practitioners who must continually update their models during this volatile period.

Times of extreme change don’t last forever. As the saying goes, “This, too, shall pass.” In the meantime, we will continue to produce bi-weekly updates on key risk factors during the crisis. 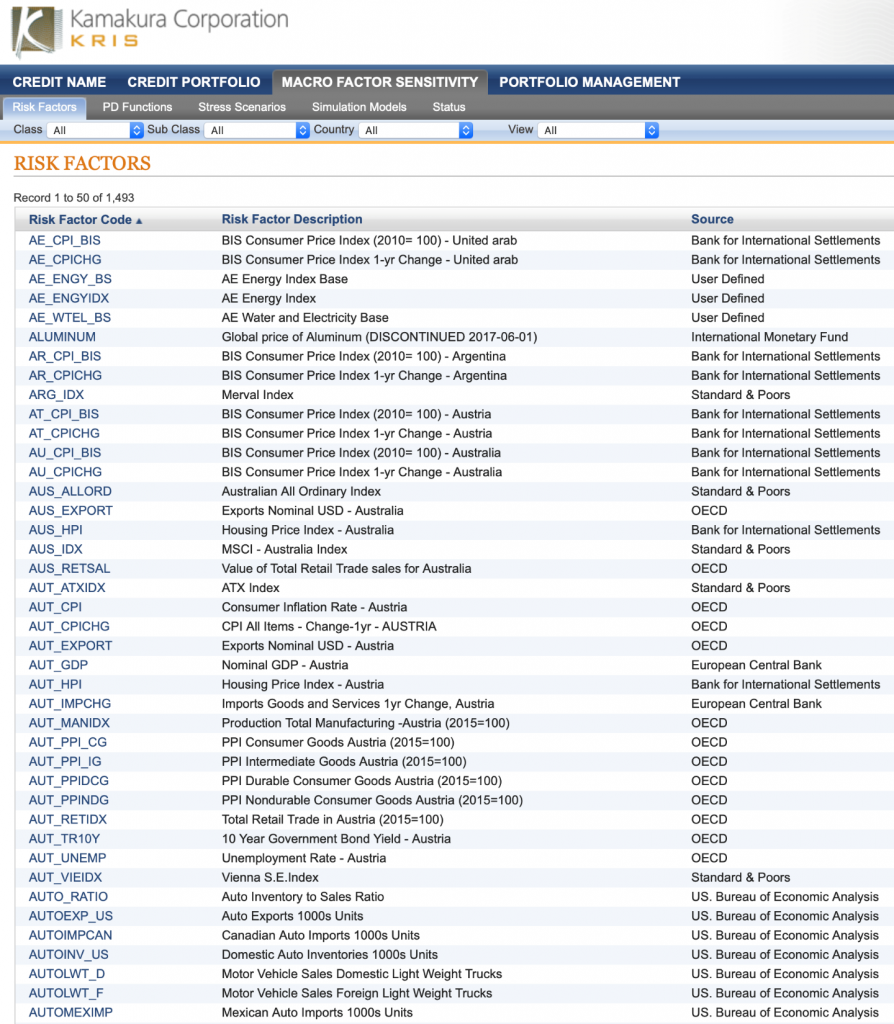 About Kamakura Corporation
Founded in 1990, Honolulu-based Kamakura Corporation is a leading provider of risk management information, processing, and software. Kamakura was recognized as a category leader in the Chartis Report, Technology Solutions for Credit Risk 2.0 2018. Kamakura was named to the World Finance 100 by the editor and readers of World Finance magazine in 2017, 2016 and 2012. In 2010, Kamakura was the only vendor to win two Credit Magazine innovation awards. Kamakura Risk Manager, first sold commercially in 1993 and now in version 10.0.3, is the first enterprise risk management system for users focused on credit risk, asset and liability management, market risk, stress testing, liquidity risk, counterparty credit risk, and capital allocation from a single software solution. The KRIS public firm default service was launched in 2002. The KRIS sovereign default service, the world’s first, was launched in 2008, and the KRIS nonpublic firm default service was offered beginning in 2011. Kamakura added its U.S. Bank default probability service in 2014.

Kamakura has served more than 330 clients with assets ranging in size from $1.5 billion to $3.0 trillion and fund managers with Assets Under Management in excess of $26 trillion. Its risk management products are currently used in 47 countries, including the United States, Canada, Germany, the Netherlands, France, Austria, Switzerland, the United Kingdom, Russia, Ukraine, South Africa, Australia, China, Hong Kong, India, Indonesia, Japan, Korea, Malaysia, Singapore, Sri Lanka, Taiwan, Thailand, Vietnam, and many other countries in Asia, Europe and the Middle East.