A Known Unknown?
Kamakura Troubled Company Index Increases by 2.02% to 14.92%

NEW YORK, February 4, 2020: The idea that the death of one butterfly could have a far-reaching effect on historical events was first introduced in a 1952 short story by Ray Bradbury, “A Sound of Thunder.”

Could the increase in short-term risk be an indicator of a shift in the credit cycle?

The Kamakura Troubled Company Index® showed a large jump in default risk last month, with a 2.02% rise to 14.92%, resulting in a drop in credit quality from the 42nd percentile to the 34th percentile. The index also displayed a fairly large jump in volatility, ranging during the month from 10.35% to 14.92%. The index reflects the percentage of 40,500 public firms that have a default probability of over 1%. An increase in the index reflects declining credit quality, while a decrease reflects improving credit quality. 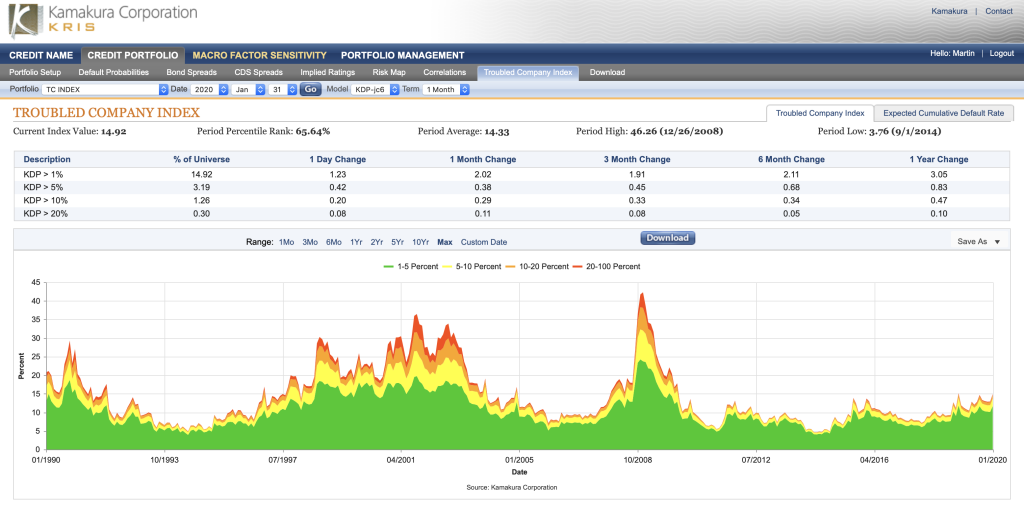 At 14.92%, the Troubled Company Index fell to 34th percentile of historical credit quality as measured since 1990.

Among the 10 riskiest-rated firms listed in January, six are in the U.S., two are in Spain, and one each are in Luxemburg and the U.K. The riskiest rated company in our coverage universe was Deoleo SA (BME:OLE), a Spanish company that is the world’s largest olive oil processor. During the month, it took extraordinary action to avoid bankruptcy, leaving small investors with losses which, in effect, created a selective default. It’s 1-year KDP was 51.58% up 25% for the month and has been over 30% for over a year, providing early warning. Six of the ten riskiest firms are in the energy sector. We also noticed a sharp jump among the riskiest firms’ short-term (30-day KDP) default probability. You can see these results in the charts below.

The Kamakura expected cumulative default curve for all rated companies worldwide narrowed, but the one-year expected default rate increased by 0.28% to 1.29% while the 10-year rate remained 14.23%. 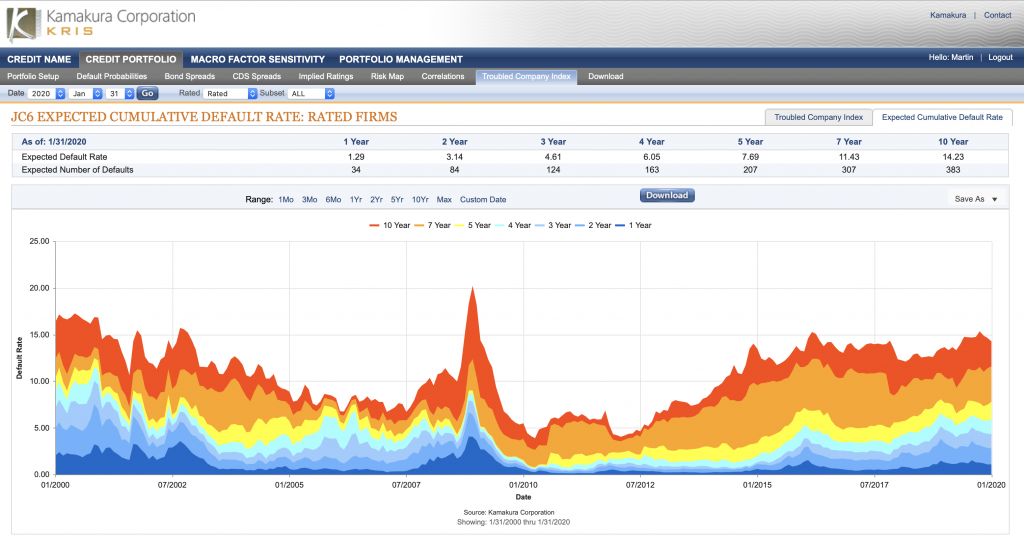 Explaining market moves and credit cycle changes is easy enough in hindsight, especially after a narrative is created by financial journalists. In today’s instant-information, short-attention-span world, headlines seem to explain every move, for example, “Gold slides as potential conflict with Iran eases.”

Speaking of Iran, it seems to have disappeared from the press and the blogosphere these days as news about coronavirus takes its place. Has the Iranian risk really disappeared, or is it simply one more potential event that could disrupt the most benign credit cycle and the longest bull market in history?

We have many of these ”known-unkowns” emerging on a global basis, including the one just mentioned and the question of what happens in the U.S. post-impeachment. Now that Brexit is a done deal, what will happen next in the UK and Europe? And in addition to the health risks it causes, what will be the impact of the coronavirus epidemic on the Chinese markets and the world economy?

If it were possible for me to accurately predict unknown outcomes, I would have bought a lottery ticket and retired long ago. I do not take comfort in deterministic stress tests, nor in quantitative measures based on a limited number of risk factors, nor in normal or log-normal distribution curves—or any other models that are only accepted if they produce intuitive results. Perhaps the best preparation for risk management is to reread Roger Lowenstein’s excellent book, “When Genius Failed,” which shows that catastrophic losses can happen very quickly and are generally caused by the risks you did not model.

As risk managers, we are obliged to provide an appropriate degree of skepticism. We cannot rely on regulators to “pull the punchbowl when the party gets rolling.” Unfortunately, we cannot rely on boards, bankers, or even markets to protect against irrational risk-adjusted growth. WeWork serves as a cautionary tale of how even very smart people can confuse “tailwind” with “horsepower.” As risk managers, we want to employ the most robust simulation tools available, which means n-factor risk models, MonteCarlo simulations and understand fat-tail risks.

The last down cycle was generated by the collapse of liquidity and counterparty confidence, which went viral through the financial system. I do not know what the nature of the next cycle will be, but given the computational power available today, there is no excuse not to model as many scenarios as possible to understand their implications in advance.

The Kamakura Troubled Company Index® measures the percentage of 40,575 public firms in 76 countries that have an annualized one- month default risk of over one percent. The average index value since January 1990 is 14.33%. Since November, 2015, the Kamakura index has used the annualized one-month default probability produced by the KRIS version 6.0 Jarrow-Chava reduced form default probability model, a formula that bases default predictions on a sophisticated combination of financial ratios, stock price history, and macro-economic factors.

To follow the troubled company index and other risk commentary by Kamakura on a daily basis, please follow: