Have the Debt Markets Reached a Tipping Point?

Have the Debt Markets Reached a Tipping Point?
Kamakura Troubled Company Index Declines by 0.29% to 13.01%

NEW YORK, November 4, 2019: With trillions of dollars of global debt due to mature in the next five years, investors should begin preparing for a large wave of defaults, financial research suggests. For the moment, however, the Kamakura Troubled Company Index® remains relatively stable. It ended October at 13.01% a decrease of 0.29% from the prior month. The index reflects the percentage of 40,500 public firms that have a default probability of over 1%. An increase in the index reflects declining credit quality, while a decrease reflects improving credit quality.

At 13.01%, the Troubled Company Index now sits at the 42nd percentile of historical credit quality as measured since 1990. Among the 10 riskiest-rated firms listed in October, seven are in the U.S., with one each in Spain, Switzerland, and the UK. Ascena Retail Group Inc. (NASDAQ:ASNA) remained the riskiest rated firm, with a one-year KDP of 54.62%, up 4.46% over the previous month. During the month there were three defaults, with two in the U.S. and one in Thailand.

The Kamakura expected cumulative default curve for all rated companies worldwide widened as the one-year expected default rate decreased by 0.12% to 1.19% and the 10-year rate increased by 0.76% to 15.62%.

The Federal Reserve cut its benchmark interest rate on Wednesday, but Jerome Powell made it clear that only a “material reassessment” of the economic outlook would cause the Fed to consider further cuts. Though the corporate default rate remains benign, real risks are on the horizon.

Analysis by Oxford Economics shows that $4 trillion of debt will be maturing over the next five years. The chart below shows the breakdown between investment grade and speculative debt in that mix. 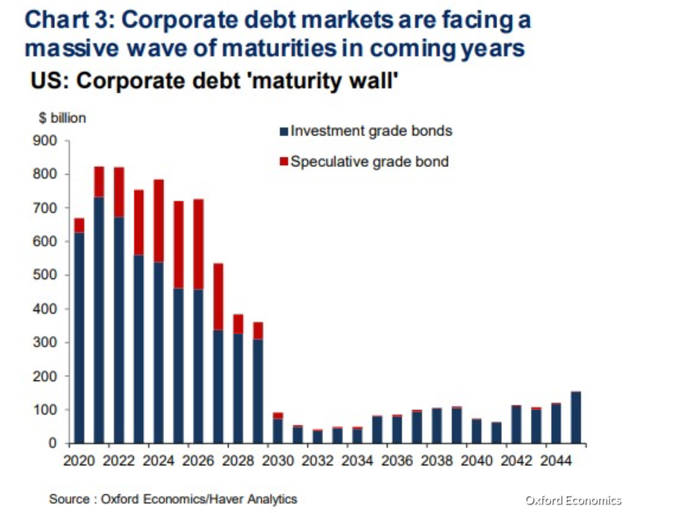 With this much debt requiring refinancing, it is not a surprise that the Kamakura expected cumulative default curve displays a bulge in expected defaults over the next five years. Economic slowing, especially if it’s combined with a slide in investor confidence, could very quickly produce a jump in defaults. Energy, retail, and telecommunications remain the riskiest sectors.

Analysis of unrated global issues, however, reveals a spectrum of broader risk. While 70% of the riskiest rated firms are American issuers, we can see below that when unrated firms are included, 60% of the riskiest firms are international and 20% are from Hong Kong, demonstrating broader risk for the global markets. Rollover risk should be one of the primary concerns among debt buyers and lenders over the next several years.

About the Troubled Company Index
The Kamakura Troubled Company Index® measures the percentage of 40,575 public firms in 76 countries that have an annualized one- month default risk of over one percent. The average index value since January 1990 is 14.35%. Since November, 2015, the Kamakura index has used the annualized one-month default probability produced by the KRIS version 6.0 Jarrow-Chava reduced form default probability model, a formula that bases default predictions on a sophisticated combination of financial ratios, stock price history, and macro-economic factors.