At 14.67%, the troubled company index now sits at the 35th percentile of historical credit quality as measured since 1990. Among the 10 riskiest-rated firms listed in August, eight are in the U.S., with one each in Great Britain and Spain. Frontier Communications (FTR:NASDAQ) was the riskiest-rated firm, with a one-year of KDP of 48.81%, up 25.02% from the prior month. Last month’s riskiest firm, Halcon Resources, filed for court approval of a reorganization plan on August 7. In addition to Halcon, two other U.S. firms and one Mexican firm in our coverage universe defaulted.

The Expected Cumulative Default Rate continues to point towards an increase in defaults in 2020. The expected one-year default rate for next year jumped to 58 basis points. This indication of economic weakening is consistent with the Federal Reserve’s cut in interest rates at the end of July and many current economic forecasts. Using the Expected Cumulative Curve, we can extract these one-year-forward expected defaults and see their evolution of over the past months. They have consistently pointed to an economic weakening, with an increase in the default rate followed by a recovery in 2021.

Using another view, we can disaggregate the one-year expected cumulative default rate by sector. Energy, telecommunications, and consumer discretionary goods remain the sectors most at risk. On Friday, August 20, the Wall Street Journal published an article entitled “Oil and Gas Bankruptcies Grow as Investors Lose Appetite for Shale,” which described rising bankruptcies in the U.S. oil industry and noted that energy companies with junk-rated bonds had been defaulting at the highest level since 2017. Followers of Kamakura’s Expected Cumulative Default Rate would have seen this risk building over the past 18 months.

Equally interesting is the country view, which has been showing increased risk in Spain, Italy, Japan, China, and most recently, Canada. 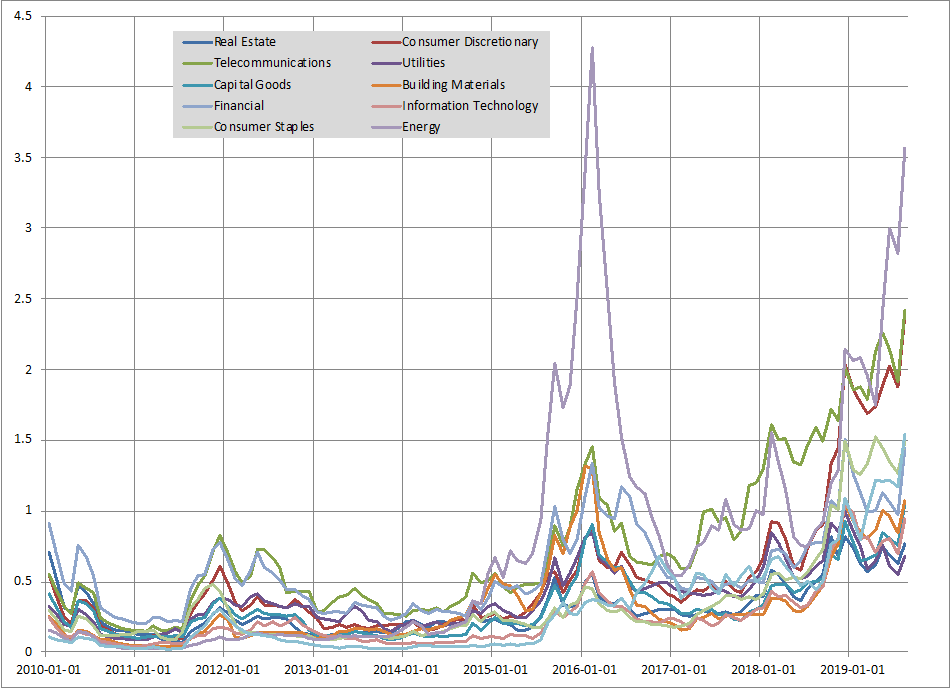 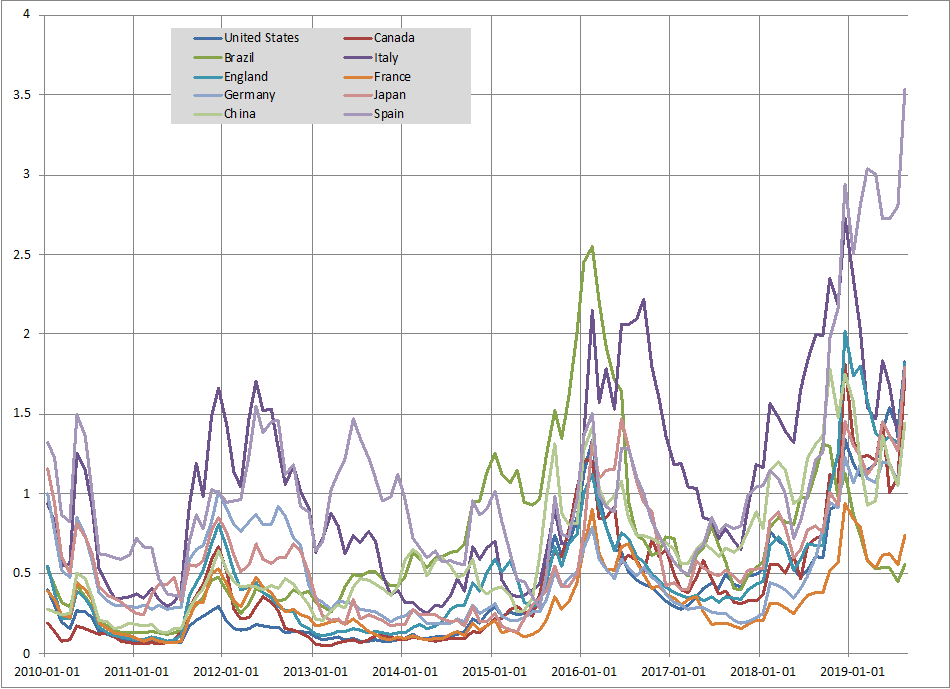 The Kamakura Troubled Company Index® measures the percentage of 40,576 public firms in 76 countries that have an annualized one- month default risk of over one percent. The average index value since January 1990 is 14.35%. Since November, 2015, the Kamakura index has used the annualized one-month default probability produced by the KRIS version 6.0 Jarrow-Chava reduced form default probability model, a formula that bases default predictions on a sophisticated combination of financial ratios, stock price history, and macro-economic factors.