At 12.03%, the troubled company index now sits at the 47th percentile of historical credit quality as measured since 1990. Among the 10 riskiest-rated firms listed in June, seven are in the U.S., with one each in Belgium, Great Britain and Spain. During the month there were three defaults in our coverage universe, with two in the US and one in Brazil.

Halcon Resources (HK:NYSE) became the riskiest-rated firm, with a one-year of KDP of 53.10%, up 32.29% from the prior month. The firm was notified by the NYSE of noncompliance with its standard listing criteria, based on its average daily stock price. That factor naturally weighed negatively on the company, On the other hand, Halcon finally named a new CEO, filling a vacancy that has been open since February. The appointment may add at least a small measure of stability to the company.

The Kamakura expected cumulative default curve for all rated companies worldwide widened as the one-year expected default rate decreased by 0.17% to 1.26%, while the 10-year rate increased by 0.22% to 14.6%. 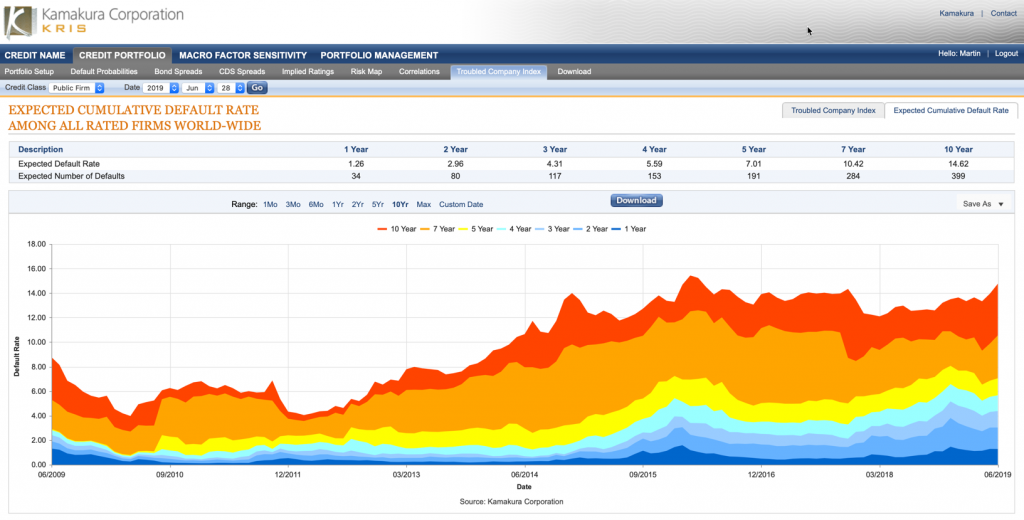 The decline in risk revealed by the Troubled Company Index® reflects the markets’ optimism and search for gains. In the U.S., markets rebounded in June, although the gains were driven by a handful of stocks. It currently appears that the market is pricing in the Federal Reserve’s continued use of monetary policy as a put for the equity markets. European stocks were higher ahead of the G-20 meetings, which are raising hopes of a trade settlement between China and the U.S. Asian markets were more guarded and edged downward. Bond yields continued to drop based on long- term economic concerns. At the same time, investors appeared to be willing to take risks to obtain positive yields in the high-grade space. This was especially evident in Austria, which sold its second tranche of “century bonds.”

Using another view, we can disaggregate the 1-year expected cumulative default rate by sector. While that rate came down by 17 basis points generally, we also see that it surged for both the energy and consumer discretionary goods sectors. 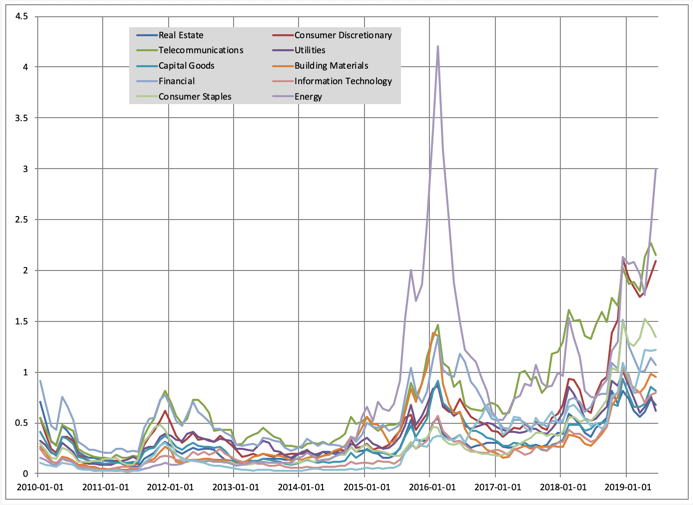 Studying the movement in default probabilities by sector, country, and counterparty provides insight into the risks late in the credit cycle. We will be publishing more research on this topic soon.

About the Troubled Company Index
The Kamakura Troubled Company Index® measures the percentage of 39,000 public firms in 76 countries that have an annualized one- month default risk of over one percent. The average index value since January 1990 is 14.35%. Since November, 2015, the Kamakura index has used the annualized one-month default probability produced by the KRIS version 6.0 Jarrow-Chava reduced form default probability model, a formula that bases default predictions on a sophisticated combination of financial ratios, stock price history, and macro-economic factors.