At 12.85%, the troubled company index now sits at the 42nd percentile of historical credit quality as measured since 1990. Among the 10 riskiest-rated firms listed in May six are in the U.S., with one each in Australia, Belgium, Great Britain and Spain. Pier 1 Imports (PIR:NYSE) moved ahead of Global Eagle Entertainment Inc. (ENT:NASDAQ) as the riskiest-rated firm, with a one-year of KDP of 49.91%, up 11.65% from the prior month. During the month there were six defaults in our coverage universe, with three in the US and one each in Korea, Switzerland, and Taiwan.

The increased risk revealed by the Kamakura Troubled Company Index®reflects uncertainty in global growth expectations resulting from trade and tariff concerns. In the U.S., planned retail store closings already top 7,150, and tariff wars could inflict even more pain on this vulnerable industry segment. Interestingly, however, while the S&P 500 fell 6.6% in May, the VIX remained flat. Government bond yields fell to 20-month lows, reflecting a flight to safety. Yield on the German 10-year bund fell to -0.201%, an all-time low, while the Dutch 10-year bond turned negative for the first time since September, 2016.

During the Great Recession from December 2007 through June 2009, the one-year KDP averaged 2.24% and peaked at a little over 4%. It fell as low as 0.50% during the expansionary phase. The forward one-year default rate confirms that we are late in the credit cycle, but it also implies that the coming economic slowdown with increasing defaults will not be as bad as the last cycle and will be relatively shallow, given the quick improvement in the implied rates for 2021 and 2022.

It is interesting to see how the average one-year KDP (Kamakura Default Probability) has moved relative to the credit cycle.  As a proxy for the credit cycle, I have substituted the Federal Reserve’s Senior Loan Officer Opinion on Bank Lending Practices, which uses tightening and loosening standards as a stand-in for the expansion or downturn stages of a cycle. 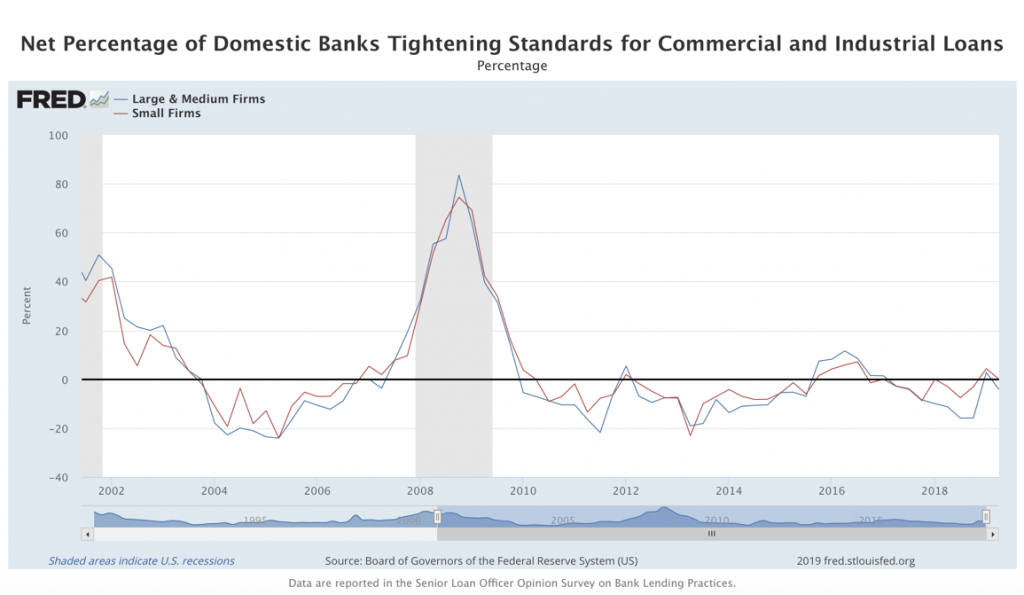 About the Troubled Company Index
The Kamakura troubled company index (Reg. U.S. Pat) measures the percentage of 39,000 public firms in 76 countries that have an annualized one-month default risk of over one percent. The average index value since January, 1990 is 14.38%. Since November, 2015, the Kamakura index has used the annualized one-month default probability produced by the KRIS version 6.0 Jarrow-Chava reduced form default probability model, a formula that bases default predictions on a sophisticated combination of financial ratios, stock price history, and macro-economic factors.

About Kamakura Corporation
Founded in 1990, Honolulu-based Kamakura Corporation is a leading provider of risk management information, processing, and software. Kamakura was recognized as a category leader in the Chartis Report,Technology Solutions for Credit Risk 2.0 2018. Kamakura was named to the World Finance 100 by the editor and readers of World Finance magazine in 2017, 2016 and 2012. In 2010, Kamakura was the only vendor to win two Credit Magazine innovation awards. ,Kamakura Risk Manager, first sold commercially in 1993 and now in version 10.0.3, is the first enterprise risk management system for users focused on credit risk, asset and liability management, market risk, stress testing, liquidity risk, counterparty credit risk, and capital allocation from a single software solution. The KRIS public firm default service was launched in 2002. The,KRIS sovereign default service, the world’s first, was launched in 2008, and the KRIS non-public firm default service was offered beginning in 2011. Kamakura added its ,U.S. Bank default probability service in 2014.