The importance of vigilant due diligence: KRIS as a dynamic early warning system.

The importance of vigilant due diligence: KRIS as a dynamic early warning system
for investment and portfolio monitoring incl. for macro-prudential supervision.

Introduction & background
We have selected Singapore-listed Hyflux (SGX: 600), to understand how creditworthiness erosion happens as a consequence of a combination of macro factors, market factors, and idiosyncratic factors. 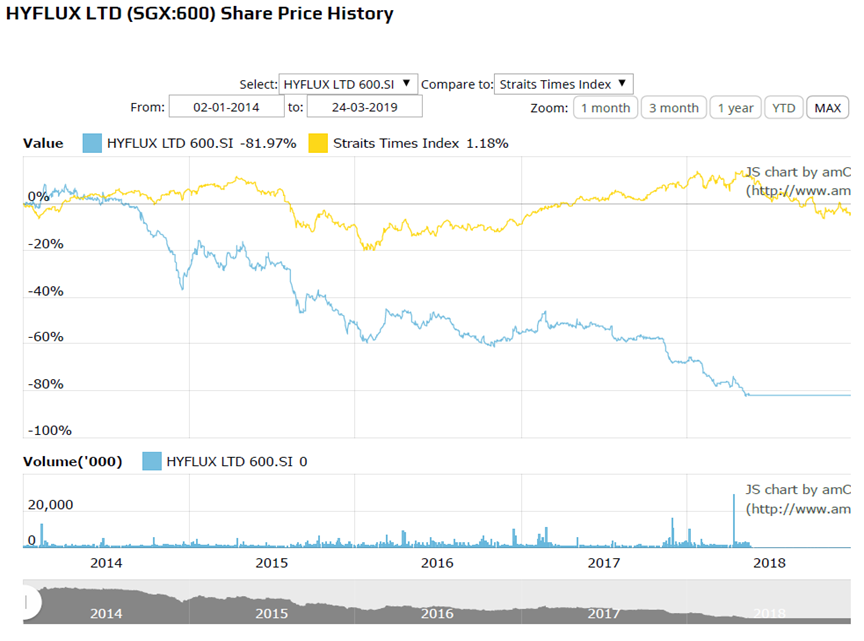 As can be seen from the performance of Hyflux’s stock price returns relative to the benchmark (STI) since 2014, Hyflux’s returns have been on a secular downtrend, exacerbated also by the adverse news and publicity in the recent past, as a result of its deteriorating business environment and cashflow problems – more of its problems and issues can be found at:

Its catastrophic slump though has stunned over more than 30,000 retail investors who were lured by the promise of a 6 percent annual return forever from a company that seemed to have a gold seal of government approval.

At the heart of the debacle is Tuaspring, a desalination and power plant that cost S$1.1 billion ($809 million) and was heralded as one of the “national taps” for an island that had long depended on importing water and harvesting rainwater for survival.

Tuaspring was opened to great fanfare in September 2013. But the facility hasn’t made money since under its 25-year water-supply agreement. And losses snowballed after its gas-turbine power plant started selling excess capacity in 2016 to the power grid, which had a glut of electricity caused by the opening of the market to competition. As cash depleted and liabilities approached S$2.7 billion, Hyflux sought court protection from creditors to restructure.

Its debacle has prompted statements and feedback from eminent institutions like the Director of Centre for Governance, Institutions and Organizations at NUS Business School in Singapore, Prof Lawrence Loh who told Bloomberg that Hyflux’s downfall “is really a wake-up call for the Singapore financial sector” with regards to “how we promote such novel and risky instruments, the role of financial intermediaries and the education of the investing public”.

A Monetary Authority of Singapore spokesperson also responded to Bloomberg‘s queries regarding the issue, stating: “As a listed company, Hyflux is required under SGX’s disclosure rules to provide investors with up-to-date, material information such as its financial condition and prospects.”

All these issues are now well and truly recognized (in hindsight), hence, the proliferation of articles and news about the danger of investing in companies like Hyflux or Noble Energy, which is facing similar challenges. What can we learn from Hyflux’s debacle and how can we protect the investors, retail, banks, and institutional, in cases like the above?

Implications
It implies being more pro-active and vigilant in monitoring the company’s liquidity and financial status, and the challenges of its business model, in an era of changing dynamics and environment including making more transparent all these factors.

One possible approach is to harness the disparate data and information out there (e.g., macro-economic, market, financial performances, existing mainstream ratings if available, management changes) and use technological advances like automation, AI and machine learning to yield a dynamic credit ratings system like KRIS from Kamakura Corporation.
Figure 2 below illustrates the inputs (factors) of the KRIS model. These factors are real-time and dynamic. Because they are changing over time, the outputs of their credit ratings analysis will also fluctuate according to the input performances over time, affording the KRIS credit ratings an advantage over the traditional static and often reactive ratings from the more mainstream credit ratings agencies. In the case of Hyflux whose perpetual bonds were not rated, such automated ratings provide an alternative independent view of Hyflux which often could be used as an early warning sign of things amiss with the company due to the pro-active dynamic slant of the KRIS ratings model. Let’s look at some of KRIS information about Hyflux since 2013. 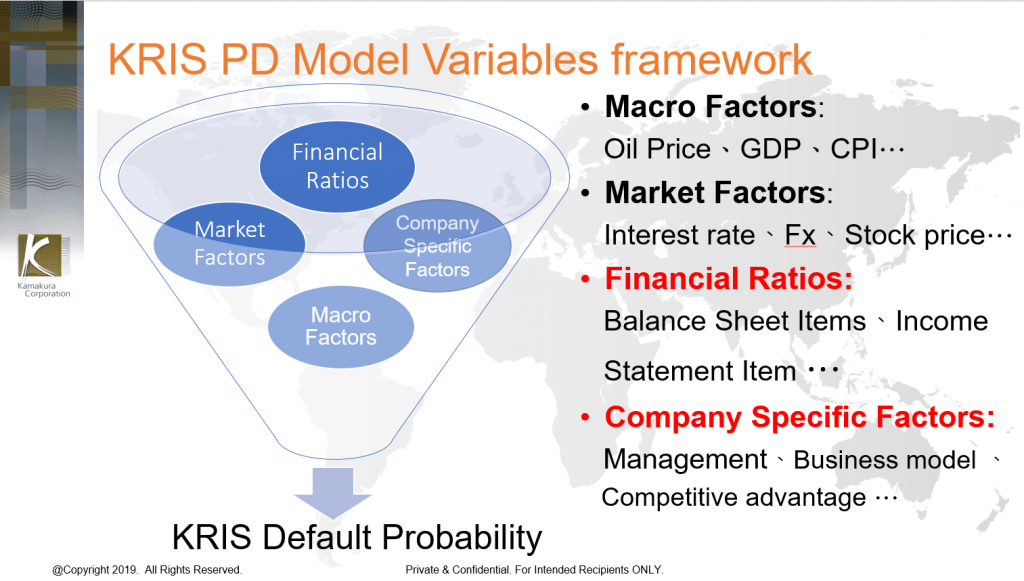 KRIS credit spread performances of Hyflux over time
Fig. 3a to 3c below illustrate the KRIS KDP (Kamakura Default Probability) spread changes of Hyflux over time. As you can see, since the 3rd Quarter of 2015 (Fig. 3c), the KDP for Hyflux has been incrementally increasing suggesting that Hyflux was in the early stages of creditworthiness erosion as early as 2015.

It is instructive to note that in Fig 3d, Hyflux’s default probability (KDP) was already larger than the 90th Percentile default probability of the same sector from as early as 2016 Oct (Fig. 3d). Hence, from a credit ratings perspective, the dynamic changes in the credit spreads were providing advanced information and early warning signs of possible credit deterioration and erosion.

Investors or portfolio managers using KRIS would have this early advantage over the general population of Hyflux investors who would probably be hearing or know of Hyflux’s initial problems only during its financial reporting periods, which are often backward looking.

In addition, KRIS also provides more information about why the Hyflux default probability calculated is higher than for other companies. Let’s look at Figure 4 below which illustrates KRIS model factor percentiles. For example, in Figure 4 below (left side), the value of the Hyflux company’s market leverage is larger than the 90th percentile market leverage of the same sector. It means that the leverage ratio of Hyflux is way too high and may cause problems for the company. Moreover, the value of the Hyflux’s cash/MV(asset) is smaller than the 20th percentile cash/MV(asset) of the same sector. It shows Hyflux has a serious cash shortage (liquidity shortfall) compared to other companies. This information could help explain the high default probability of Hyflux.

Macroprudential monitoring – enhancing Singapore’s reputation as a financial hub
In addition, KRIS also publishes information about the state of companies in distress in different regions or sectors – see Figure 5 (Troubled Company Index). In Kamakura Corporation’s popular troubled company index, a firm is considered “troubled” if its default probability exceeds one percent. By further accessing this index, the list of companies potentially in distress will be published.

If this credit spread and ratings information were made available to the general public, regulators and investors, it would enhance the general governance and transparency of the financial markets by leading to pro-active supervision and due diligence in the responses from a macro-prudential perspective long before such issues escalated to a more severe crisis state, with a focus on investor protection as well. In addition, this would also enhance Singapore’s reputation as a premier financial hub in Asia and hopefully, attract more companies locally and regionally to list on SGX.

Conclusion
In conclusion, as an additional note to demonstrate the advantage of using a dynamic credit ratings system to monitor the performances of companies and their credit-worthiness, Figure 6 above shows the KRIS information on the Noble Group, which has recently struggled to repair investor confidence after setbacks in the past two years that included a questioning of its accounts by Iceberg Research and a commodities downturn that triggered a share price collapse, credit rating downgrades and a series of asset sales and fund raising. The widening spread of its KDP ratings is also an early indication of its creditworthiness deterioration which should have prompted the concerns of investors and regulators with respect to its ongoing challenge and deterioration to its business long before its escalation, similar to Hyflux’s case.

About Kamakura Corporation
The KRIS default probability models are benchmarked on more than two million observations of firms of all types. The total number of defaults used in the current version 6.0 models is more than 2,600. The unparalleled volume of data and the research insights of Kamakura’s Managing Director Prof. Robert Jarrow make the KRIS default probability service the most accurate early warning credit risk assessment indicator framework available. That is one of the reasons why Credit Magazine named both KRIS and the Kamakura Risk Manager Software package “Innovations of the Year”. For more information about KRIS default probabilities, please contact your Kamakura representative or e-mail Kamakura’s credit experts at info@Kamakuraco.com.