Volatility moderated, with the index ranging from 15.14% on January 1 to 11.87% on January 31. Credit risk improved throughout the course of the month. 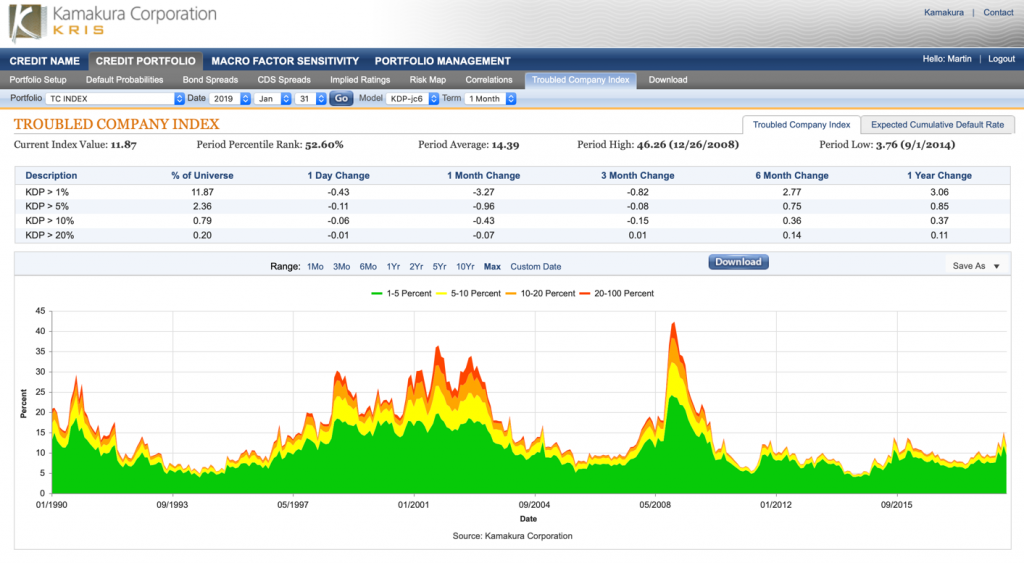 At 11.87%, the troubled company index now sits at the 47th percentile of historical credit quality as measured since 1990. Among the 10 riskiest-rated firms listed in January, five are in the U.S., two are in Great Britain, and one each is in Australia, Canada, and the Netherlands. Debenhams PLC (DEB:LN) was the riskiest-rated company in our universe, with a one-year KDP of 52.06%, an increase of 3.02% over the past month. Uncertainty over Brexit, a shift to online retailing, and shareholder opposition at the annual meeting—which led to the departure of the CEO—all contributed to the firm’s increased risk of default. 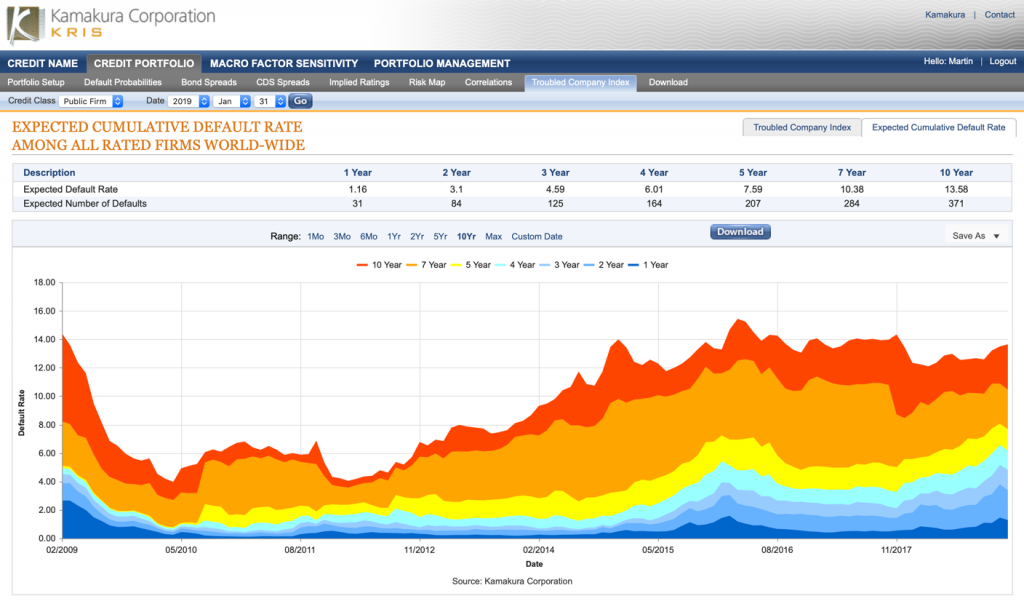 “Whipsawed”—that’s a comment I read about the latest Federal Reserve guidance. Questions abound as to whether the Fed is being influenced by political and market pressures, though the organization has dismissed rumors of a “Powell Put” to rescue of Wall Street. The Fed has also rejected the suggestion that it is responding to political pressure, insisting that its decisions are based purely on data and economic indicators.

Speaking of economic conditions, Italy officially entered its third recession of the past decade, with negative GDP growth for the second consecutive quarter. Overall, the eurozone economy began 2019 with economic activity at its slowest pace in more than five years.

In the U.S., stocks, bond yields, and commodities all moved together, with correlations across asset classes hitting their highest level in over a year. Both fund and retail investors continued to withdraw money from U.S. loan funds for the eleventh consecutive week.

While the Fed’s decision to stabilize interest rates will reduce debt service pressure on leveraged companies, it will not reduce economic weaknesses that may pressure the companies’ operating performance.

The short-run uncertainty we are experiencing points to the critical value of macroeconomic indicators in predicting weakness or strength in the financial markets. In the Troubled Company Index®, we expect to see continued month-to-month oscillation between increases and decreases in short- term risk, requiring close attention to the two-to-five-year default probabilities. These will be crucial measures for estimating default probability from a directional, as well as a predictive basis.

About the Troubled Company Index
The Kamakura troubled company index (Reg. U.S. Pat) measures the percentage of 39,000 public firms in 76 countries that have an annualized one- month default risk of over one percent. The average index value since January, 1990 is 14.39%. Since November, 2015, the Kamakura index has used the annualized one-month default probability produced by the KRIS version 6.0 Jarrow-Chava reduced form default probability model, a formula that bases default predictions on a sophisticated combination of financial ratios, stock price history, and macro-economic factors.

About Kamakura Corporation
Founded in 1990, Honolulu-based Kamakura Corporation is a leading provider of risk management information, processing, and software. Kamakura was recognized as a category leader in the Chartis Report, Technology Solutions for Credit Risk 2.0 2018.>/a> Kamakura was named to the World Finance 100 by the editor and readers of World Finance magazine in 2017, 2016 and 2012. In 2010, Kamakura was the only vendor to win two Credit Magazine innovation awards. Kamakura Risk Manager, first sold commercially in 1993 and now in version 10.0.3, is the first enterprise risk management system for users focused on credit risk, asset and liability management, market risk, stress testing, liquidity risk, counterparty credit risk, and capital allocation from a single software solution. KRIS public firm default service was launched in 2002. The KRIS sovereign default service, the world’s first, was launched in 2008, and the KRIS non-public firm default service was offered beginning in 2011. Kamakura added its U.S. Bank default probability service in 2014.