At 15.14%, the troubled company index now sits at the 35th percentile of historical credit quality as measured since 1990. Among the 10 riskiest-rated firms listed in December, five are in the U.S., two are in Great Britain, and one each in Australia, the Netherlands, and Spain. Pier 1 Imports Inc. (NYSE:PIR) became the riskiest-rated firm in the index. During the month, its CEO departed and the company announced it is exploring alternatives including the sale of the company. Despite positive results in the home furnishings sector, Pier 1 has continued to struggle.

Over the holiday season you may have heard the auto company slogan proclaiming,

“Make this a December to Remember.”

For the markets, however, it was more like a December to forget. For credit portfolio managers, it was an opportunity to study and learn from the spikes in credit volatility and the dramatic increases in short-term default probabilities.

The credit markets have a lot of important trends to digest: the global unwinding of quantitative easing (which will likely produce unintended consequences), the risk of a chaotic Brexit, continued growth in U.S. student debt, poor market returns that could increase levels of underfunding in pension plans, a possible extended U.S. government shutdown, continued uncertainty about trade, and—most serious of all—expanding corporate leverage, both in the U.S. and China.

During the month, two charts from the Wall Street Journal caught my attention. The first shows the ratio of U.S. debt-to-GDP hitting record levels, and the second shows that increasing leverage is a global problem. 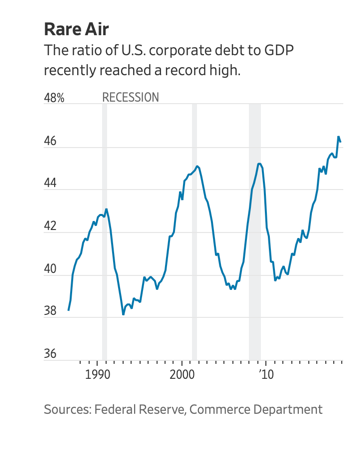 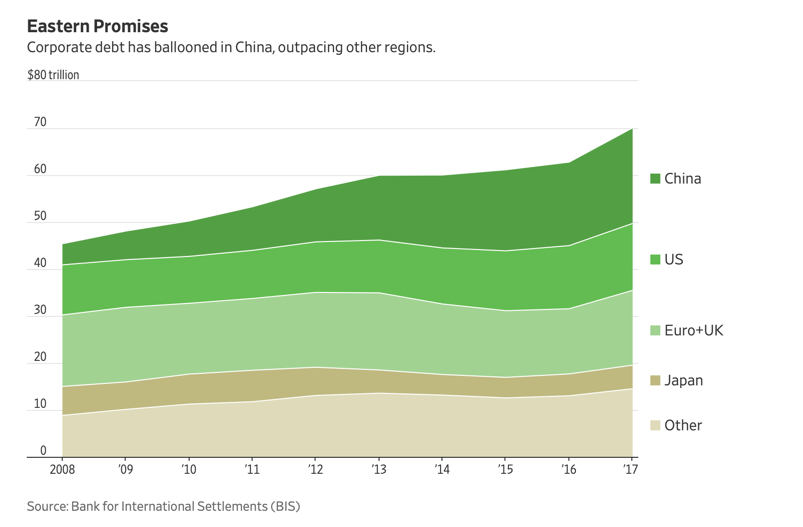 We know that macroeconomic factors primarily drive longer-term Kamakura default probabilities (KDP), while market and financial factors drive the shorter-term KDPs. We reported this month that the Troubled Company Index® ended the month at the 35th percentile. The longer-term indices are flashing even brighter warning signs, with the one-year index closing the year at the 24th percentile, the three-year index at 28th percentile and the five-year at the 8th percentile. Inversions in the KDP are important red flags. They help to identify firms in risky sectors that are also experiencing significant company-specific dangers as measured by their quantitative default risk. It will be critical to monitor how the January financial filings impact default probabilities.

About the Troubled Company Index
The Kamakura troubled company index (Reg. U.S. Pat) measures the percentage of 39,000 public firms in 69 countries that have an annualized one- month default risk of over one percent. The average index value since January, 1990 is 14.40%. Since November, 2015, the Kamakura index has used the annualized one-month default probability produced by the KRIS version 6.0 Jarrow-Chava reduced form default probability model, a formula that bases default predictions on a sophisticated combination of financial ratios, stock price history, and macro-economic factors.

About Kamakura Corporation
Founded in 1990, Honolulu-based Kamakura Corporation is a leading provider of risk management information, processing, and software. Kamakura was recognized as a category leader in the Chartis Report, Technology Solutions for Credit Risk 2.0 2018. Kamakura was named to the World Finance 100 by the editor and readers of World Finance magazine in 2017, 2016 and 2012. In 2010, Kamakura was the only vendor to win two Credit Magazine innovation awards. Kamakura Risk Manager, first sold commercially in 1993 and now in version 10.0.3, is the first enterprise risk management system for users focused on credit risk, asset and liability management, market risk, stress testing, liquidity risk, counterparty credit risk, and capital allocation from a single software solution. The KRIS public firm default service was launched in 2002. The,KRIS sovereign default service, the world’s first, was launched in 2008, and the KRIS non-public firm default service was offered beginning in 2011. Kamakura added its ,U.S. Bank default probability service in 2014.